Photo by Bryan Stevens The female Eastern Bluebird is not quite as brightly colored as her mate.

Photo by Bryan Stevens A male Eastern Bluebird perches on a chain-link fence to watch for insect prey. 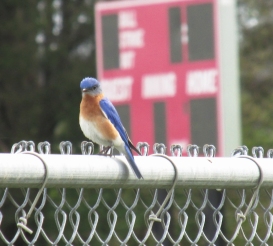 A famous song declares that “somewhere over the rainbow, bluebirds fly,” so you’ll have to excuse me if I have been looking for those elusive rainbows during the unseasonably warm weather the region’s enjoyed in recent weeks.

Also, like the song promises, “dreams really do come true,” which was fulfilled by the arrival of this year’s first pair of Eastern bluebirds at my home on Friday, Feb. 23. The presence of a pair of these beautiful and trusting birds is always sure to put people in a good mood. People have known for generations that bluebirds make good neighbors. A pair of bluebirds in your yard or garden provides hour upon hour of free entertainment as one watches these birds go about their daily routine. At this time of the year, much of that routine is focused on finding and claiming the best possible nesting location for the upcoming spring season.

The Eastern bluebird is one of the most beloved American songbirds.

The Eastern bluebird is one of North America’s best-known cavity-nesting birds. About 85 species of North American birds use cavities in trees for nesting purposes. Cavity-nesters include ducks, such as buffleheads and wood ducks, as well as birds of prey such as Eastern screech-owls and American kestrels.

Woodpeckers and nuthatches can excavate their own cavity in a dead or decaying tree. Others, such as the bluebirds, must find a cavity already in existence. Such cavities are scarce real estate and can be subject to some intense competition. The Eastern bluebird is at a disadvantage when forced to compete with non-native introduced birds such as aggressive European starlings and house sparrows. Even native competitors such as house wrens and tree swallows are serious rivals when it comes down to staking a claim to prime nesting real estate.

Over the years, I have found bluebirds nesting in cavities inside wooden fence posts, but there are fewer wooden fence posts every year. This reinforces the idea of how changing landscapes have affected these birds. Instead of wooden fence posts, many farmers now use metal ones, and dead or dying trees — a much sought-after resource for cavity-nesting birds — are often removed from woodlands.

Photo by Bryan Stevens • A female Eastern Bluebird gathers pine needles to use as nesting material.

Fortunately for bluebirds, this species will also accept lodging in a nest box, or birdhouse, provided for them by human landlords. One of the simplest ways to bring bluebirds close is to offer wooden boxes, constructed to their specific requirements, for their use as nesting locations. Because of their trusting nature when it comes to their human neighbors, the Eastern bluebird is one of our most beloved birds. In fact, bluebirds are such popular birds that interest in them and their well-being has inspired the foundation of organizations such as the North American Bluebird Society. The Eastern bluebird has also been designated the official state bird for New York and Missouri, which provides more testimony to the immense popularity of this bird.

Photo by Bryan Stevens • A flock of Eastern bluebirds perches on fenceposts.

There are two other species of bluebirds found in North America. The Western bluebird is found throughout the year in California, the southern Rocky Mountains, Arizona and New Mexico, as well as in part of Mexico. The species ranges in the summer as far north as the Pacific Northwest, British Columbia and Montana. The Mountain bluebird nests in open country in the western United States as far north as Alaska. They are short-distance migrants, retreating as far south as Mexico during the winter season.

Other than these three species, North America offers few others birds with mostly “blue” plumages. Some examples include indigo bunting, blue grosbeak, and blue jay, as well as birds like great blue heron and belted kingfisher.

In addition to housing, food and water can be used to lure Eastern bluebirds closer. This bird doesn’t eat seeds, but it can be attracted with an offering of mealworms — live or freeze-dried – or commercially prepared peanut butter nuggets. A water feature in a yard is also a magnet for bluebirds and a host of other bird species.

If your home doesn’t provide suitable open, spacious bluebird habitat, it’s still easy to enjoy these beautiful birds. An afternoon or evening drive into open country, such as agricultural farmland, is likely to yield sightings of this bird on fences and utility lines. Golf courses, some of which go the extra mile to accommodate bluebirds, also provide habitat for these lovely birds.

The Eastern bluebird is present in the region in all seasons and is one of our more common birds. If you’re already an experienced landlord and host for these birds, you probably already know they joys they can bring. If not, why not try to attract them closer to you? Most bluebirds in the region have already started looking for a nesting site. Many of these birds may nest two or even three times in a single season. March has only just arrived, so there’s still time to place a nest box or two on your property to get their attention.