Photo by Katy Jefferson/Pixabay.com • A ruby-throated hummingbird sips sugar water at a feeder. During migration, blooming flowers and sugar water feeders are valuable sources of quick energy for these tiny flying gems.

Mildred Wright of Fall Branch, Tennessee, recently shared a story through Facebook about a nesting hummingbird in her yard. 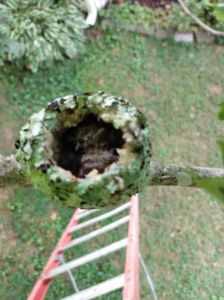 In this photo provided by Mildred Wright, the young hummingbirds can be glimpsed in their nest.

“I discovered this hummingbird nest in a tree in my front yard,” she wrote in a Facebook message. “I have watched mom take excellent care of her babies through some really rough weather.”

She explained that she found the nest on June 8 and has observed as the female hummingbird incubated her eggs and then raised her two hatchlings.

Interestingly, there are a few simple reasons it’s always two eggs for hummingbirds. First, the nest is so small — about the size of a walnut half-shell — that there is barely room for two eggs, let alone more. Second, once the young hatch, the nest has just enough room to accommodate them as they grow, fed well by their mother. Third, feeding two hungry young hummingbirds is a demanding task. A female hummingbird has to find enough food to fuel her own body and help her young in the nest grow and thrive. It’s a full-time job during the daylight hours. She’s pressed hard to succeed at raising two young. Attempting to care for more would most likely prove impossible.

In this photo provided by Mildred Wright, two eggs are shown snug inside the female ruby-throated hummingbird’s nest.

Now that many female hummingbirds are finishing up the task of bringing forth a new generation of hummingbirds, the leisurely fall migration can begin. Hummingbirds are not as frantic about moving south in the fall as they are single-minded about heading north every spring. Numbers of these birds always reach a peak in late summer and early fall at my home, and this year’s shaping up to be a repeat of past ones.

Hummingbird species number around 340, making the family second in species only to the tyrant flycatchers in sheer size. Both of these families consist of birds exclusive to the New World.

Photo by Peggy_Marco/Pixabay.com • The “Doctor Bird,” which is also known as the swallow-tailed hummingbird, resides only on Jamaica.

Our own hummingbird, which we can claim from April through October every year, is the ruby-throated hummingbird. Ruby-throats are remarkable birds that nest throughout the eastern United States as well as southern Canada. In winter, most ruby-throats withdraw to Central America and Mexico, although a few winter in Florida. They are famous for the amazing feat of crossing the Gulf of Mexico twice each year as they travel to their nesting grounds and then back to their overwintering homes. 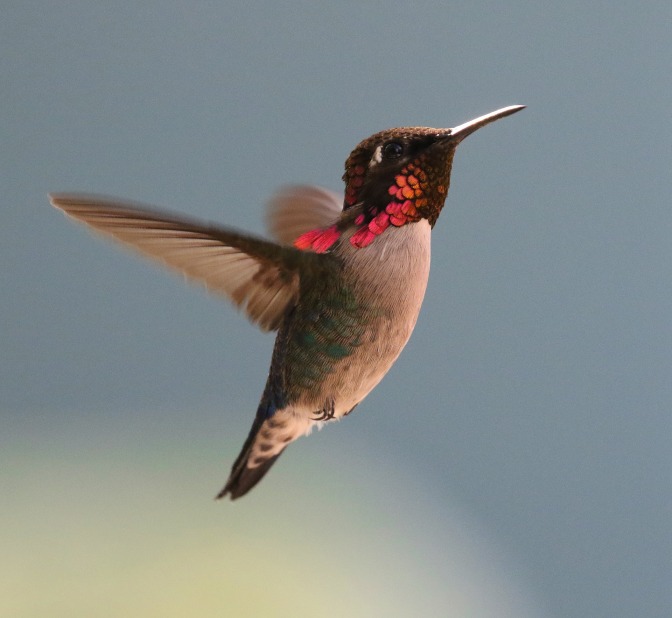 Photo by BarbeeAnne/Pixabay.com • The bee hummingbird of Cuba is the smallest bird in the world.

The next generation of hummingbirds always helps swell the number of these tiny birds in our yards in late summer and early fall. It’s our duty as host to keep them safe as they stop in our yards and gardens during their fall migration. Many of the hummingbirds in the fall will be making their first migration, so they will need all the help we can provide to make a successful journey.

Perhaps consider enhancing your plantings of summer flowers while also continuing to offer multiple sugar water feeders. Keep the sugar water mix at a four parts water to one part sugar ratio. Don’t offer honey in your feeders. When mixed with water, it can spoil and spread fungal diseases. Remember that hummingbirds don’t subsist on sugar water alone. They also eat numerous tiny insects and spiders to obtain the protein they need for their dietary needs, so don’t use insecticides near feeders or flowers that hummers are likely to visit.

So, until October frosts eventually drive them out of the region, enjoy the ruby-throated hummingbirds while you can. 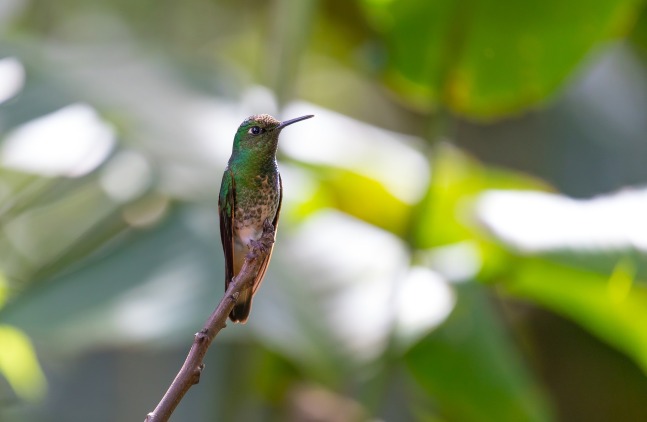 Photo by Geschenkpanda/Pixabay.com • The buff-bellied coronet is a hummingbird native to Colombia, Ecuador and Venezuela.