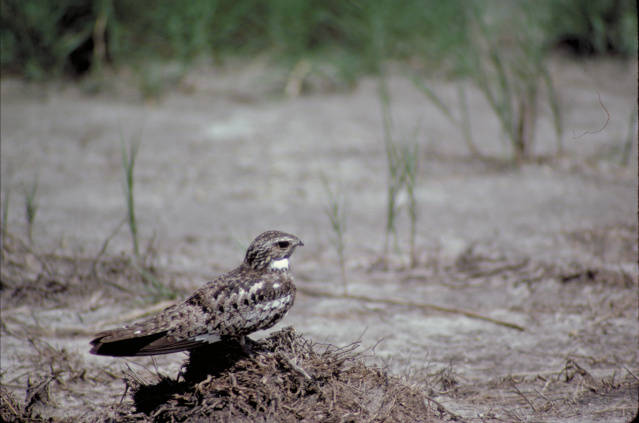 Photo by Dr. Thomas G. Barnes/ USFWS • A common nighthawk perches on a low clump of vegetation during a rest period. Nighthawks are known for migrating in large flocks.

Autumn’s a chance for me to indulge my passion for warblers, with a few dozen species of these songbirds passing through the region in the span of a few weeks. They’re not the only migrating birds worth watching, however, as a recent Facebook post reminded me.

“Been watching several hundred common nighthawks the last few nights fly down the valley next to the farm,” John wrote in his post. He also reported that he saw a female Northern harrier fly by at eye level about 20 feet from him as he watched the migrating nighthawks. The Northern harrier, once known as the “marsh hawk,” is one of many raptors known to migrate.

Like such birds as warblers, vireos, thrushes, tanagers, flycatchers and hummingbirds, the common nighthawk, is a neotropical migrant. In addition, the common nighthawk has one of the longest migration routes of any North American bird. Twice a year, these birds migrate for distances ranging from 1,600 to 4,200 miles. Nighthawks that spend the spring and summer in Canada travel to southern South America for the winter months.

With September advancing on the calendar, I have been keeping an eye on the treetops for passing warblers, vireos and tanagers, but I also remember to direct my gaze to the skies. Forgetting to look skyward could result in missing the passage of such varied migrants as chimney swifts, broad-winged hawks and common nighthawks.

So, what is a common nighthawk? First, this bird, despite what is implied by its name, is not a hawk. It’s also not strictly nocturnal. Particularly in the fall, nighthawks are active during daylight hours when engaged in catching winged insects. Outside of fall migration, these birds can often be observed over large parking lots or well-lit streets, snatching up insects swarming around the light poles.

The common nighthawk is one of three members of the nightjar family found in the region during the summer months. The other two nightjars are the whip-poor-will and chuck-will’s-widow, birds that produce their namesake vocalizations in the nocturnal hours. Both of these species migrate, but they don’t take the dramatic approach employed by nighthawks. Each fall, common nighthawks form large flocks, ranging in size from dozens to hundreds or even thousands of individuals, as they migrate south for the winter.

Photo by Skeeze/Pixabay.com • A common nighthawk chooses a perch atop a fence post for a survey of its surroundings.

Unlike whips and chucks, the common nighthawk isn’t active only after dark, which makes it much easier to observe these birds. They look somewhat like swifts and swallows but are much larger. They are brownish-gray birds with pointed wings and forked tails. They are easily identified by distinctive white patches on the underside of their wings.

The nightjar, or Caprimulgidae, family of birds is also sometimes known as “goatsuckers.” Apparently, in trying to explain the nocturnal tendencies of these birds, the Greeks came up with the imaginative but erroneous idea that birds like nighthawks liked to sneak into barns and have a meal of fresh goat’s milk. In reality, nighthawks feed almost exclusively on insects, including ants, wasps, beetles, caddisflies, moths, mayflies, flies, crickets, grasshoppers, and other insects. They capture much of their insect prey on the wing.

So, keep looking skyward. The next flock of migrating common nighthawks may fly over your home. These flocks are usually on the move throughout September.  I’ve managed only three sightings of solitary nighthawks so far this migration season, which falls far short of the number John Whinery reported at his farm.

I will keep watching the skies. Nighthawks can also appear almost magically, as if out of thin air. First, observers may see one of two birds, then several, followed quickly by dozens or sometimes hundreds as they wheel and cavort in the skies overhead with impressive grace and agility. I’ve seen flocks that would easily number more than 500 birds in locations throughout the region, although flocks often number only a couple of dozen birds.

Photo by Jean Potter • A common nighthawk rests on a metal railing.