I received an email recently from Tom and Helen Stetler. The Stetlers live in Elizabethton and often attend bird walks offered by the Elizabethton Bird Club.

“We have a Pileated Woodpecker working on our dead willow tree for the past two days,” Tom wrote in the email. “It has made a fairly large hole at the base of the tree. The diameter at the base is about eight inches. It looks like there are some bugs inside the tree, maybe some termites.”

He added an interesting tidbit of information about Pileated Woodpeckers.

“Our old-timey neighbor calls it a wood hen,” Tom wrote in the email.

The Pileated Woodpecker has actually had an abundance of common names associated with it.

English naturalist Mark Catesby, who died in 1749, gave this large bird the name of “Large Red-crested Woodpecker.” The Swedish botanist apparently gave the woodpecker the scientific name of Dryocopus pileatus.

A painting of an Ivory-billed Woodpecker by Mark Catesby, an English naturalist.

Another English naturalist, John Latham, apparently gave the bird the common name of Pileated Woodpecker, basing the name on the scientific name established by Linnaeus.

Beyond this history of how the bird eventually got the name Pileated Woodpecker, there are a lot of folk names for this particular bird, including such interesting ones as “King of the Woods” and “Stump Breaker.”

The loud vocalization of this woodpecker has also inspired names such as Wood Hen as mentioned by Tom in his email. Other names along these lines include “Indian Hen” and “Laughing Woodpecker.”

If anyone knows of other common names for the Pileated Woodpecker, I’d enjoy hearing about them.

Depending on whether you believe that the Ivory-billed Woodpecker still exists somewhere in Cuba or Arkansas, the Pileated Woodpecker is the largest of North America’s woodpeckers.

Male Pileated Woodpecker show a red whisker stripe on the side of the face that is absent in the female. Otherwise, they look similar.

These large woodpeckers — they can reach a length of about 19 inches — often forage close to the ground on old stumps or fallen logs.

The Pileated Woodpecker is widespread in the United States and Canada, favoring wooded areas in both countries. This woodpecker has proven adaptable, now thriving even in suburban areas offering sufficient woodland habitat. 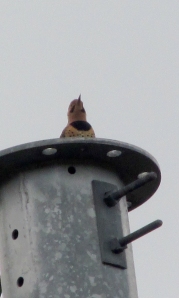 Photo by Bryan Stevens
A Northern Flicker calls from atop a utility pole.

Pileated Woodpecker was among the 49 species of birds found during the third of the four Saturday Bird Walks being held in October. This walk took place on Oct. 18 at Sycamore Shoals State Historic Park in Elizabethton.

A total of 10 participants took part in the Saturday bird walk at Sycamore Shoals. A persistent wind made it feel cool, and we spent some of the walk enjoying sunshine that gradually gave way to overcast skies.

The walk yielded observations of 49 species of birds, including quite a few surprises.

A flock of 18 Great Egrets that flew over our heads, following the course of the Watauga River, was perhaps one of the more unanticipated moments.

Photo by Bryan Stevens
An American Coot on the Watauga River.

I also enjoyed some seasonal firsts, including the first American Coot I have seen this fall. The Ring-billed Gull that soared repeatedly overhead was also a first autumn observation. Both coots and gulls spend the winter months at area lakes, rivers and, quite often, parking lots. The winter of 2013-2014 saw a large flock of Ring-billed Gulls spending its days in the parking lot at the Elizabethton Wal-Mart.

For this far into October, we also did fairly well with warblers, finding five species — Tennessee, Chestnut-sided, Northern Parula, Yellow-rumped and Palm — during the walk along the park’s trails. 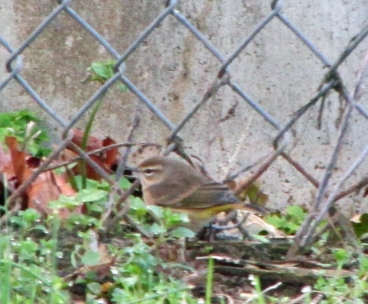 Photo by Bryan Stevens
A Palm Warbler forages along a chain-link fence.

The last of the planned October Saturday bird walks will begin at 8 a.m. from the parking lot at Sycamore Shoals State Historic Park on Oct. 26. The public is welcome. Bring binoculars to increase your viewing enjoyment.

For more information, email ahoodedwarbler@aol.com or call the park at 543-5808. Readers are welcome to follow me on Facebook at https://www.facebook.com/ahoodedwarbler. 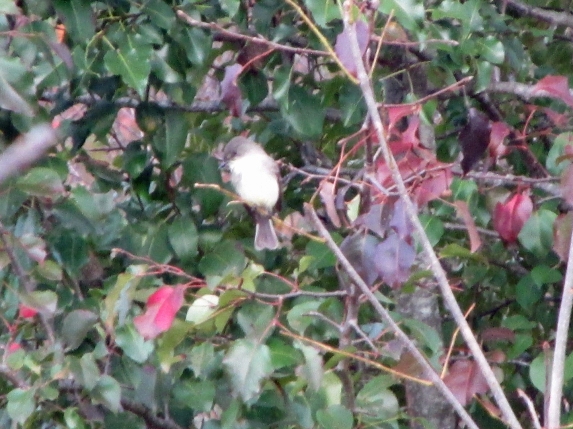 Photo by Bryan Stevens
An Eastern Phoebe perches in a sapling.