Photo by jeanvdmeulen/Pixabay.com • The barn owl’s heart-shaped face helps this bird, which is also known by such names as death owl, ghost owl, and hobgoblin owl, stand out from the other owls that share the domain of night.

With common names such as cave owl, death owl, ghost owl, night owl and hobgoblin owl, the nocturnal hunter more widely known as the barn owl provides a fitting focus for exploration as the calendar counts down toward Halloween.

Barn owls lurk in the shadows of night, but most people would never know it unless they happen to hear some of the spine-tingling vocalizations produced by this poorly known predatory bird. Shiver-inducing shrieks and screams quite capable of piercing the veil of darkness are often produced by the barn owl. This owl doesn’t utter loud hoots like the great horned owl. Instead, the call of the barn owl is not likely one to be soon forgotten because of its raspy, nails-on-the-chalkboard nature. A hearer could easily be misled into misinterpreting the shrill vocalizations as originating from something far more ghoulish.

According to the website for the Owl Research Institute in Charlo, Montana, barn owls are the most widely distributed owl in the world, and they may be one of the most common, as well. In Montana, where ORI is located, barn owls observations are rather sparse. ORI has documented 12 barn owl nests and made numerous observations in the last 12 years, according to its website. Likewise, the barn owl is not too often observed in Northeast Tennessee and Southwest Virginia.

The barn owl is often associated with rural, agricultural areas, which is one reason they can often be found in old barns, sheds and farm silos. However, the first barn owl I ever saw in the wild was living beneath the eaves of a building on the campus of Mountain Home Veterans Administration in Johnson City, Tennessee, within walking distance of commercial buildings and the campus of East Tennessee State University.

The barn owl has no close relatives among the other owls found in the region. The barn owl is in its own unique family known as Tytonidae. The family name comes from a Greek word, Tuto, which translates as “night owl.”

Photo by Bryan Stevens • An Eastern Screech Owl, pictured, is considered a member of the family called Strigidae, which consists of the owls described as “typical owls” by experts.

Other owls in our region — great horned owl, barred owl, Eastern screech-owl, short-eared owl— belong to a family called Strigidae, which are often described as “typical owls” by ornithologists and other experts.

The barn owl is one of nature’s most perfect predators. Among animals tested by scientists, the barn owl shows an almost uncanny ability to detect prey animals by sound alone. Prey, which is often small voles or other rodents, often doesn’t know of the danger until it’s too late. The structure of the barn owl’s wings and feathers is such that these predatory birds can fly through the darkness in almost perfect silence.

There’s a heavy cost that the owl must pay for these special adaptations. According to the Barn Owl Trust, an organization founded in 1988 in the United Kingdom to conserve one of the most beautiful birds on Earth, a barn owl’s specially adapted feathers are not particularly waterproof. In addition, barn owls are unable to store a lot of body fat. The Trust’s website notes that barn owls are unable to hunt in heavy rain and are particularly prone to starvation during prolonged periods of severe weather and/or prey shortage.

Much myth and legend have arisen around the world’s owls, including the barn owl. A native tribe in California known as the Newuks believed that warriors who proved courageous and virtuous became great horned owls after death. Men who practiced wicked ways, however, were thought to become barn owls.

This owl with the white heart-shaped face has long spooked humans. The bird’s head and upper body typically vary between pale brown and various shade of gray. Especially in flight, the barn owl can look rather pale.

The barn owl is the most widespread terrestrial bird species in the world, occurring on every continent except Antarctica. In addition to its various spooky common names, barn owls are also known by such descriptive monikers as monkey-faced owl, silver owl and golden owl. Some other common names include church owl and steeple owl. This owl acquired this name for its habit of utilizing steeples or bell towers in churches as roosting locations when barns or caves were lacking.

For a bird so closely associated with people and their dwellings and related structures, the barn owl remains an enigma to many. YouTube offers a variety of videos that showcase the creepy vocalizations of barn owls. Familiarize yourself with their calls, and you’ll be more likely to distinguish a barn owl calling after dark from the more sinister specters on the prowl this Halloween.

To learn more about barn owls or to make a contribution toward their conservation, visit www.barnowltrust.org.uk 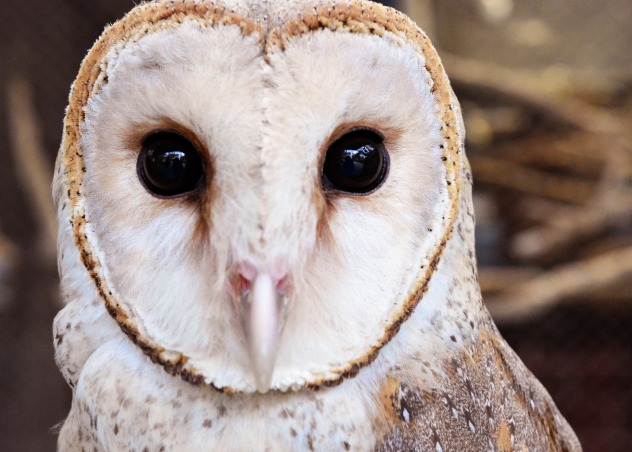 Photo by mochawalk/Pixabay.com • A barn owl gives a penetrating stare to the camera.