Photo by Bryan Stevens • The male indigo bunting is a resplendent bird.

Two recent summer bird counts emphasized some of the more commonplace birds in the region. While American robins and European starlings were extremely abundant, these two birds are permanent residents and are present year-round. A few other summer songbirds also helped swell the ranks of some of the seasonally common birds. For instance, the Unicoi County Summer Bird Count found a total of 141 indigo buntings while the Elizabethton Summer Bird Count tallied 82 of these little blue beauties. Both of these Northeast Tennessee surveys are conducted by members of the Lee and Lois Herndon Chapter of Tennessee Ornithological Society.

The indigo bunting likes to reside in the boundary region where forests and woodlands meet fields and pastures. Personally, the indigo bunting has always been a bird that is suggestive of the long, hot days of summer. One of my earliest and still quite vivid birding memories is a recollection of a shockingly blue bird atop a blue spruce tree in my yard. Several decades later, the tree is no longer standing, but these beautiful birds — I now know these summer visitors were indigo buntings — return year after year to my yard and gardens.

Photo by Bryan Stevens • Neotropical migrants, such as this Indigo Bunting, increase the variety of bright and colorful birds in eastern North America from spring until fall each year.

These birds usually arrive in the region in late April and I’ve seen them in late October, although most indigo buntings have left the region by late September.

Male indigo buntings are persistent singers, and in the past couple of weeks one very enthusiastic male has been singing even during the hottest hours of recent July afternoons. The preference of this small songbird is to sing from the tops of tall trees. They are often concealed by the green leaves. When I do get a glimpse of the obscured songster, often all I see is a dark shape silhouetted against the bright sky. Sometimes, if he plunges from the upper branches into the woodland understory, I get that telltale glimpse of blue feathers.

The indigo bunting is the only solid blue bird in the eastern United States. It’s all an illusion, of course. The indigo bunting’s feathers are not really blue. The male’s brilliant azure plumage is caused by the process of refraction. This process absorbs all but blue light, which explains why the indigo bunting appears blue. In bright light, it can even look unnaturally vivid blue. In poor light, however, an indigo bunting male can appear black. Fortunately, indigo buntings have both a characteristic body shape and song, so even if the birds are not seen at their best, they can still be recognized.

Photon by Bryan Stevens • Indigo Buntings will perch on wires and sing for hours even during hot summer days.

Like many species of songbirds, the male is by far the most colorful. In this instance, the male is also responsible for the species’ name. Indigo is a blue dye that was once an important crop in the South. The drab female may boast some blue highlights in her plumage. Juvenile birds just out of the nest also resemble the female. Pay close attention to any indigo buntings you observe as summer progresses. Juvenile birds will look mostly brown with just a hint of blue in the wings and the tail. These will be the young buntings that were hatched this spring and early summer. They will often accompany their parents to feeders.

Indigo buntings are particularly fun birds to observe in late summer. Although some books indicate that males are not very active in rearing young, I have on numerous occasions witnessed male buntings feeding fledglings at feeders. Indigo bunting juveniles, like the young of many other birds, beg for tidbits from parents by “bowing,” spreading their wings and shivering. These actions usually prompt a parent to pop some morsel into an impatient youngster’s open bill. Indigo buntings are relatively easy to view. They frequent weedy fields and roadside brush. During the breeding season, males can also be seen singing from prominent perches. The song, a distinctive jumble of notes, can help observers find these dedicated singers.

Photo by Bryan Stevens • Although bright blue, a male indigo bunting will often blend with its surroundings.

The male indigo bunting is one of the most colorful birds to visit feeders in the region. This species is also extremely fond of millet seed. I like to have some feeders stocked with millet when the buntings begin to return each spring. They will also feed on thistle and sunflower seeds. Away from our feeders, they also devour plenty of seeds from various noxious weeds. Because of the indigo bunting’s appetite for the seeds of destructive weeds, it is considered a very beneficial bird.

One of the most attractive summer scenes is to observe American goldfinches and indigo buntings feeding together on the nodding heads of summer sunflowers. The goldfinch males, resplendent in their bright yellow and black plumage, compete with the blue indigo bunting males for the fresh sunflower seeds. When bright red male Northern cardinals join in, observers have a complete artists’s palette for summer viewing.

The indigo bunting will usually respond to human squeaks that imitate a bird’s call. When a flock or family group of buntings are disturbed by a human observer, they usually begin a chorus of alarmed “chipping.”

As I indicated earlier, indigo buntings remain in the region until late September. Although this bird typically winters in Mexico, Panama and the Caribbean, in recent decades some indigo buntings have only gone as far south as Florida to spend the winter. There in the Sunshine State, the indigo buntings may mingle with a close relative, the splendidly multi-colored painted bunting. I usually see these vibrant songbirds whenever I visit coastal South Carolina in spring or summer. Male painted buntings are probably one of the most colorful birds in the United States with hues of red, green, purple and blue in their feathers.

Photo by Bryan Stevens • The male painted bunting is one of North America’s most colorful birds.

Keep your feeders stocked with millet and sunflower seeds if you want to increase your chances of seeing indigo buntings. They will need some dependable places to re-fuel and rest during their upcoming fall migration.

Daryl Herron, a real-life friend as well as a Facebook one, posted a photo of a bird on my page recently, seeking help with identifying the bird. His sister, Monica Cody, took the photo at her Kingsport home. The stunning bird depicted in the photo, as I happily reported back to Daryl, was a blue grosbeak. The grosbeak is an impressive bird, with males showing off an overall blue plumage save for some brown and black feathers in the wings.

Photo by U.S. Fish & Wildlife Service/ David Brezinski
Rose-breasted Grosbeaks will likely be among the colorful birds present for this year’s rally.

Blue grosbeaks are mostly southern birds with Tennessee, Kentucky and Virginia representing the northern tier of this bird’s range in the southeastern part of the country. Look for these chunky, blue birds in brushy fields or along hedgerows in fairly open country. They favor the same habitats as such birds as yellow-breasted chat, brown thrasher and loggerhead shrike.

It’s a shame this bird isn’t more common in the region. Blue grosbeaks will visit feeders, but in more than 20 years of maintaining well-stocked feeders, I’ve managed to attract only one of these birds. If more common, it would surely be a favorite bird among the people offering free seed for their feathered friends.

The blue grosbeak is related to the better-known rose-breasted grosbeak. Male rose-breasted grosbeaks are absolutely stunning, especially for people getting their first-ever glimpse of this bird. It’s the adult male with his vibrant black and white feathers and the large rosy-red splash of color across the breast that gives this bird its common name. Females are brown, streaked birds that are larger than but easily confused with some of our sparrows.

Among grosbeaks, both sexes have a massive bill, which they use to hull sunflower seeds at feeders or glean insects from leaves and branches. It’s the heavy, blunt bill for which the term “grosbeak” is derived. “Gros” is a German term for large or big, so grosbeak simply means a large-beaked bird. People who band birds to further the study of them will tell you that rose-breasted grosbeaks have a wicked bite and are capable of delivering quite a nip. Bird banders in the region frequently encounter rose-breasted grosbeaks in their mist nets — and some bear the scars to prove it. 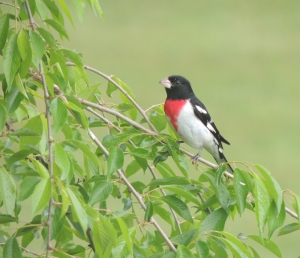 The spring arrival of rose-breasted grosbeaks is usually a fleeting visit. Finding suitable arrangements, which can consist of well-stocked feeders and perhaps a convenient water source, the migrating birds may linger for several days. These birds nest at higher elevations, however, and are usually impatient to continue the journey to where they will spend the summer months tending to their young.

This spring, Tammie Kroll was one of the lucky people to receive visits from rose-breasted grosbeaks. Tammie emailed me to share a beautiful photo she took of the male grosbeak that visited her home in Washington County, Virginia, near Exit 13 off Interstate 81.

There’s good news for those who didn’t receive springtime visits from these pretty birds. The rose-breasted grosbeak is also a common fall migrant and can again be attracted to yards offering sources of food and water. While males usually don’t look quite as dramatic by August and September, they’re still sure to cause a stir when visiting a feeder. 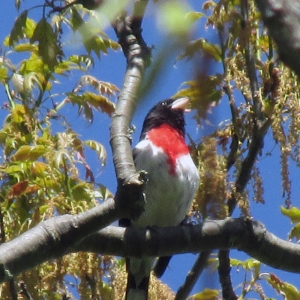 Plenty of rose-breasted grosbeaks pass through northeast Tennessee, southwestern Virginia and western North Carolina, and a few even decide to make their summer homes in the mountains in these regions. However, these birds spread out widely across the eastern half of the North American continent, ranging from northeastern British Columbia to Quebec and Nova Scotia in Canada. They also range south from New Jersey to Georgia. The rose-breasted grosbeak also reaches Colorado, Oklahoma and Kansas.

For the most part, however, the rose-breasted grosbeak is replaced in the western United States by the closely related black-headed grosbeak. I saw several of these birds during a trip to Salt Lake City, Utah, back in 2006. Other grosbeaks in the United States include the evening grosbeak and pine grosbeak. In the American tropics other grosbeaks are found, including the descriptively named yellow-green grosbeak, crimson-collared grosbeak, ultramarine grosbeak and yellow-shouldered grosbeak.

Bryan Stevens lives near Roan Mountain, Tennessee. To learn more about birds and other topics from the natural world, friend Stevens on Facebook at https://www.facebook.com/ahoodedwarbler. He is always posting about local birds, wildlife, flowers, insects and much more. If you have a question, wish to make a comment or share a sighting, email ahoodedwarbler@aol.com.