Bugaboo Springs Road near Jonesborough, Tennessee, saw some heavier vehicular traffic in mid-January after the exciting observation of a yellow-headed blackbird associating with a sizable flock of brown-headed cowbirds. 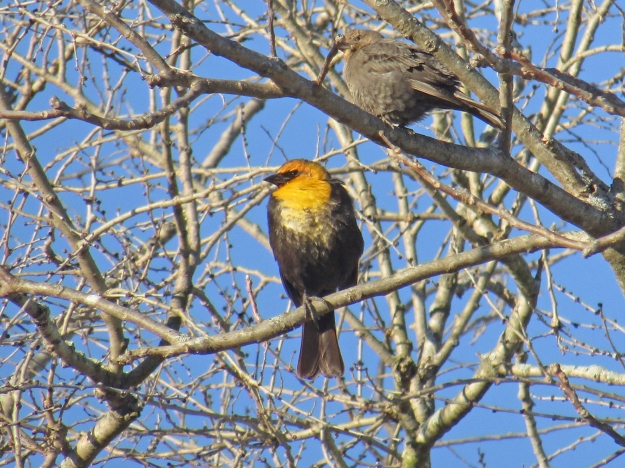 Photo by Bryan Stevens • This yellow-headed blackbird has been residing with flocks of brown-headed cowbirds and European starlings at a cattle pasture near Jonesborough, Tennessee. The bird, the first of its kind seen in Northeast Tennessee since 1994, has generated excitement among birders. Some people have traveled from as far as Knoxville, Tennessee, and Roanoke, Virginia, to see the bird.

The bird came to the attention of Dawn Peters, a resident along Bugaboo Springs Road, who noticed the unusually colorful bird at her feeders while looking out the window of her laundry room. At first, she thought the bird might be an oddball member of the cowbird flock.

“I’d never seen one before,” she said. “I knew it was something strange and something new.”

Dawn took the time to take a photograph of the bird and then contacted friends Jean and Brookie Potter, who also happened to be birders. They alerted her to the rare status of her feeder visitor.

“He really stood out,” Dawn said of the blackbird with a yellow head.

The yellow-headed blackbird arrived at her feeders on a snowy day when the temperatures had plunged. Dawn said she has been feeding birds for 20 years since she and her husband moved to Bugaboo Springs Road near Jonesborough, Tennessee. “The birds know where to come for food,” she said. “I try to feed them all, but they can eat you out of house and home.” 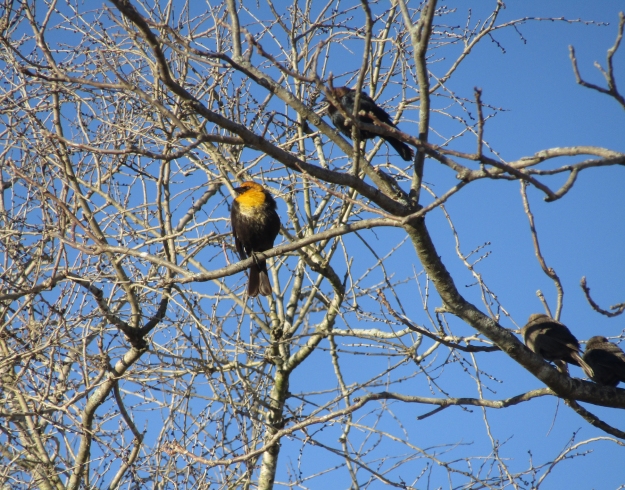 Photo by Bryan Stevens This yellow-headed blackbird and several brown-headed cowbirds perch in a tree after foraging for food in a cattle lot near Jonesborough, Tennessee.

Dawn said she gets a variety of birds at her feeders, ranging from sparrows and cardinals to mourning doves and finches. “I also get downy woodpeckers and towhees,” she added.

On occasion, she will notice a hawk in the yard. In the summer, she puts out several feeders with sugar water to attract hummingbirds. “Last summer, I had brown thrashers raise a family in my yard,” she said.

Although the yellow-headed blackbird arrived with a flock of brown-headed cowbirds, the other flock members didn’t exactly embrace him. “Some of the cowbirds would peck at him,” she said.

The yellow-headed blackbird, known by the scientific name Xanthocephalus xanthocephalus, is a relative of cowbirds, as well as the familiar red-winged blackbird. It’s a unique species in that it is the only member of the genus, Xanthocephalus. Breaking this word down from its ancient Greek origins, the name means, quite literally “yellow headed.” 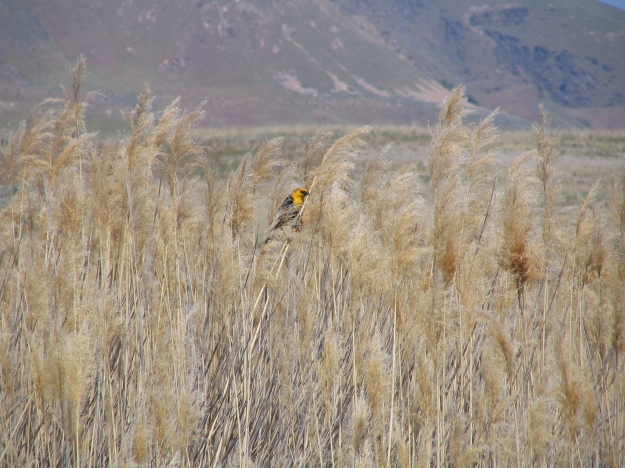 Photo by Bryan Stevens This yellow-headed blackbird was photographed at Antelope Island State Park in Utah in 2006.

The yellow-headed blackbird’s also a species that has been only a rare visitor to the region. While a common bird in wetland habitats west of the Great Lakes, the yellow-head blackbird has not been reported often in East Tennessee. In fact, there are only a handful of records since the 1930s, the most recent sightings being reported and documented in 1990 and 1994. Since it has been almost a quarter of a century since the last time a yellow-headed blackbird was found in East Tennessee, one could argue that a visit from a vagrant individual of this species was long overdue. In southwest Virginia, there are a couple of records from Smyth County dating back to July of 1985 and March of 1988.

It’s not quite clear why a yellow-headed blackbird ventured into the region in mid-January. Normally, these birds spend the winter months in the southwestern United States and Mexico. They often migrate in huge flocks with other species of birds, which could explain why the bird found itself an honorary member of a flock of cowbirds estimated to number about 300 individuals.

My first attempt to add this species to my Tennessee list ended in failure, although I did enjoy seeing several white-crowned sparrows, a handsome bird that definitely doesn’t deserve being classified as one of the “little brown birds” that so often serves as an offhand designation for sparrows. That attempt was made on the morning of Jan. 18 and may have been ended prematurely. When I got access to a computer later, I checked to see if any other observations had been reported. I noticed a report from local birder Michelle Sparks, who saw the bird probably less than 90 minutes after I had ended my first attempt.

Speculating that the yellow-headed blackbird and its accompanying flocks of brown-headed cowbirds and European starlings would return to the feedlot to forage before dark, I returned at 4 p.m. to try again. I found the feedlot overwhelmed by hundreds of cowbirds and starlings, but I didn’t see any sign of a bird with a yellow head. Many of the cowbirds carpeted the pasture as they gleaned seeds and other food items. Many of the starlings were perched in the branches of trees and on the roof of an old farmhouse. At some point, almost every bird in the chaotic flock spooked and took to the air. The flock wheeled and turned, with most of the birds settling into the upper branches of some of the taller trees at the location. I soon detected a flash of yellow. I’m not sure where the bird had been hiding earlier, but the yellow-headed blackbird proved unmistakable, perched high in the trees with the sun shining brightly. He couldn’t hide from my binoculars or camera, which I used to snap several photos of this rare visitor to the region.

I have this species on my life list, having seen yellow-headed blackbirds during visits to Utah in 2003 and 2006. While in Utah, I also saw red-winged blackbird, brown-headed cowbirds and Brewer’s blackbirds, including a partial albino individual that presented a challenge in identifying. 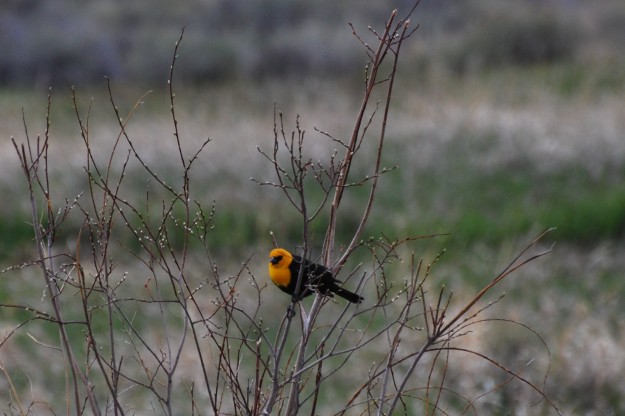 Photo by Jean Potter • This yellow-headed blackbird was photographed in Colorado in 2016.

The New World’s blackbirds belong to the family of birds, Icteridae, which also consists of birds such as meadowlarks, orioles, cowbirds, grackles, bobolinks and oropendolas. Although many blackbirds show predominantly black plumage, these birds often contrast their dark coloration with yellow, orange or red feathers. The name of the genus stems from Ancient Greek and Latin words that, translated into English, mean roughly, “jaundiced ones,” which stems from the yellow feathers present in the plumage of many species. Other blackbirds in the New World include tawny-shouldered blackbird, saffron-cowled blackbird, melodious blackbird, oriole blackbird and scarlet-headed blackbird. In the United States, other nesting species in the family include Brewer’s blackbird, tri-colored blackbird and rusty blackbird. The last of these species has shown chronic long-term and acute short-term population declines, based both on breeding season and wintering ground surveys. Some estimates suggest that the rusty blackbird population has declined by 80 percent, which could soon endanger the species.

I’m hoping the yellow-headed blackbird on Bugaboo Springs Road is liking where it has found itself this winter and will continue to delight observant birders over the upcoming weeks.

Bryan Stevens lives near Roan Mountain, Tennessee. If you have a question, wish to make a comment or share a sighting, email ahoodedwarbler@aol.com. 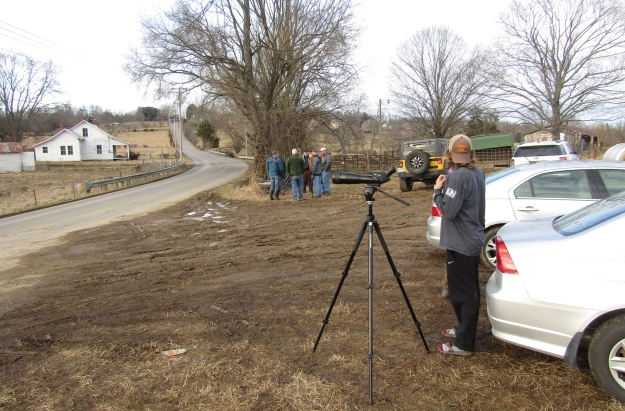 Photo by Bryan Stevens • Birders from near and far converged on Bugaboo Springs Road near Jonesborough, Tennessee, to search for the yellow-headed blackbird.