Photo by NatureLady/Pixabay.com • A Northern flicker grasps a board with its talons. These medium-sized woodpeckers spend much more time on the ground than the other woodpeckers in the region.

Irene and Peter Cannatelli emailed me recently to ask for some help identifying birds in their yard at their home in Jonesborough, Tennessee.

“We have a pair of birds we’ve never seen,” Irene wrote in the email.

They were unable to get a photo of the birds, but Irene provided a detailed description. “They have a red crown, black under neck, like a collar, a long thin beak, and brown speckled bodies,” she wrote. In addition, she noted that the birds showed white down the middle of their backs when flying off.

“They are ground feeders,” she added.

Once I studied her description of the birds in question, I felt confident that the visitors were Northern flickers, a member of the woodpeckers family, albeit a less than typical member of the extensive clan. Most of the region’s woodpeckers are black and white birds. The Northern flicker, on the other hand, shows considerable color— for a woodpecker. Irene’s description left me in no doubt of my identification.

After I responded to the email, Irene googled Northern flicker and confirmed my identification. “That is what they looked like,” she agreed.

She also shared more about her enthusiasm for local birds. “We have five bird feeders in our little bird garden,” Irene wrote.

“We made suet for the first time this past week using Crisco, oatmeal, peanut butter, sunflower seeds, cornmeal and raisins,” Irene added. “We made four blocks. When we put the first one out it was gone in one day.”

Many birds appreciate both homemade and store-bought suet cakes, which provide a needed protein boost in the winter season when insects are scarce.

Irene noted that some of the clientele at her feeders include cardinals, finches, lots of doves and blue jays. Now the couple can add flickers to that growing list.

As mentioned earlier, this is a woodpecker with many other common names, including yellow-hammer — a popular name in the Deep South — and harry-wicket, heigh-ho and gawker bird. The Northern flicker is also the only woodpecker to serve a state — Alabama — as an official bird. The flicker earned this distinction back in 1927. Soldiers from Alabama who fought for the Confederacy were nicknamed “yellowhammers” because of their grey-and-yellow uniforms, which matched the colors of the bird. Incidentally, Alabama was one of the first states to ever name an official state bird. 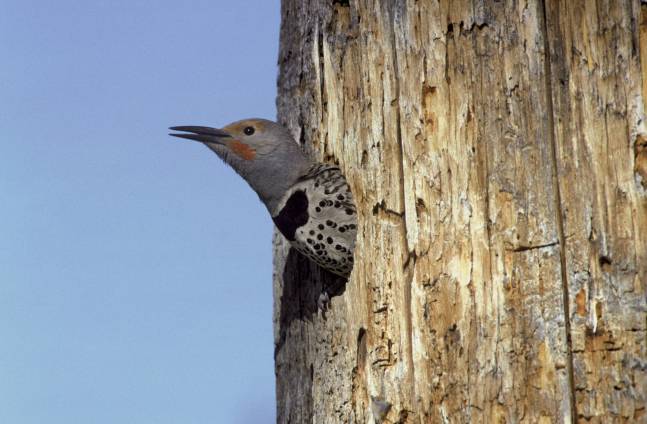 Photo by Dave Menke/USFWS • A Northern flicker peers from a tree cavity.

There are two races of Northern flicker — yellow-shafted and red-shafted — found in the United States. Eastern flickers show yellow feather shafts beneath the wings while western counterparts show red beneath the wings. A trip to Utah several years ago gave me a chance to also see the red-shafted race of this bird.

The Northern flicker is also not the only flicker in the United States. The gilded flicker inhabits many of the deserts — Sonoran, Yuma and Colorado — in the United States. Of course, trees are scarce in deserts, but that hasn’t proven an obstacle for this woodpecker. The bird is closely associated with saguaro cactus. Other desert dwellers depend on this woodpecker. Once the flickers are no longer making use of their nest and roost holes in the multi-armed cacti, other wildlife moved into the chambers.

The Northern flicker is an enthusiastic drummer, pounding loudly on the sides of trees with its stout bill. The purpose of the drumming is to communicate with mates and signal potential rivals that they’re intruding. Toward that objective, flickers sometimes substitute metal utility poles or the sides of buildings for the trunks of trees. In addition to drumming, the flicker also employs a variety of loud vocalizations that are fairly distinctive. A loud, repeated vocalization, often translated as “wicka-wicka-wicka,” is similar to the cluck-like call of the larger pileated woodpecker. The flicker is also known for emitting a sharp, loud “kleeer” call that can be heard from a considerable distance. Flickers are probably most vocal during the spring months.

When searching for flickers, however, don’t concentrate on scanning tree trunks. Flickers spend a lot of time in fields or on lawns in search of insect prey, which mostly consists of ants and beetles. This non-typical behavior by this particular bird is what threw off the Cannatellis’ attempt to identify their visitors. Flickers also eat seeds and fruit, and these woodpeckers will also visit feeders for peanuts, sunflower seed and suet.

The adult flicker is a brown bird with black bars on the back and wings. A distinctive black patch occupies the upper breast, while the lower breast and belly are beige with black spots. Males can be identified by a black or red mustache stripe at the base of the beak. They also have a red stripe on the back of their gray heads. The flicker’s dark tail is set apart by a white rump patch that is conspicuous when the bird takes flight.

Photo by USFWS • A researcher extends a flicker’s wing to show the yellow feather shafts.

The Northern flicker, as either the red- or yellow-shafted reach, ranges across the United States and Canada. The flicker also ranges to Central America, Cuba and the Cayman Islands. Known scientifically as Colaptes auratus, which can be roughly translated as the “golden woodpecker,” there are about a dozen species of flickers in North, Central and South America, as well as the Caribbean.

Look for Northern flickers in fields, orchards, city parks and well-planted suburban yards. These woodpeckers are usually not too shy around human observers and will sometimes allow for extended observation. If you’re even more fortunate, you could find one visiting your yard or garden. Just remember to scan the ground. This is one woodpecker that’s not a consistent tree-hugger like many of its kin.