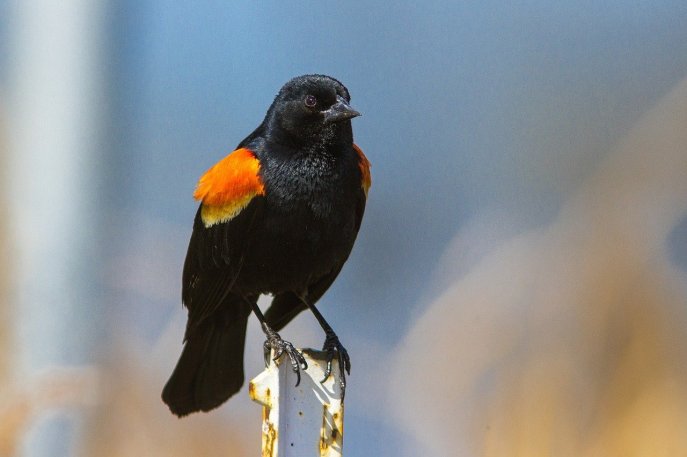 Photo by Skeeze/Pixabay.com • A male red-winged blackbird perches in an alert stance, ready to curb intrusions by other birds into his territory.

A trio of American crows (I’m not sure if a mere three individuals represent a murder of crows) flew past my porch on a recent morning. They were immediately bombarded by the resident male red-winged blackbird. The blackbird dove onto the back of the first crow, then doubled back and attacked the second crow. The third crow, perhaps seeing what happened to the others, perched and cawed for a couple of moments. Mistakenly thinking the coast now clear, the third crow set out to join its companions. The blackbird immediately attacked again, just as ferociously as in the previous two incidents.

Since arriving in April, the red-winged blackbirds have ruled the roost around the cattail-bordered fish pond. At the start of the nesting season, they even swooped at me when I got too close before we eventually settled into an uneasy truce. At home and at other locations, I have watched these blackbird attack everything from turkey vultures and great blue herons to white-tailed deer and cats.

Simply put, red-winged blackbird brook no interlopers. The observations of the blackbird with the crows got me to thinking of other birds known for their pugnacious natures. In no particular order, here are some bantam weight candidates for the title of “Most Pugnacious Bird.”

Photo by Bryan Stevens • The scientific name of the Eastern kingbird is Tyranus tyranus, a good indicator of this bird’s haughty attitude toward other birds.

The Eastern kingbird, a member of a large family of birds known as “tyrant flycatchers,” is famous for displaying an outsized attitude toward larger birds. The scientific name for this bird is Tyrannus tyrannus, which succinctly summarizes the kingbird’s belligerent attitude toward other birds. Mated pairs of kingbirds work together to drive intruders out of their territory. Kingbirds will launch themselves into battle against much larger foes, including red-tailed hawks, American crows and blue jays. Crows and jays are well-known for robbing the nests of other birds, so the aggression of kingbirds for these corvids is quite justified. 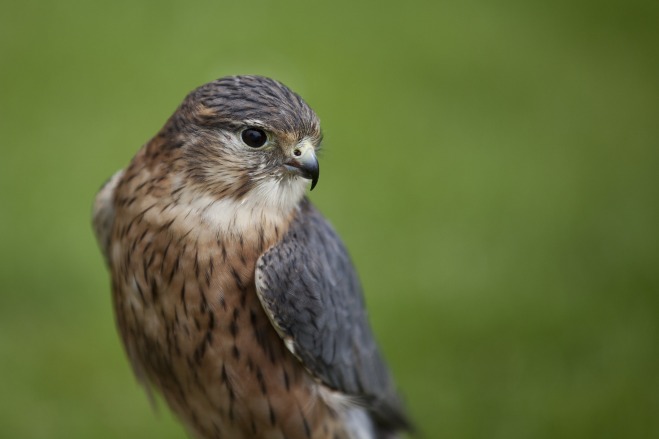 Photo by AdrianKirby/Pixabay.com • The merlin is a pint-sized falcon with plenty of feisty spirit. These raptors do not hesitate to duel with birds many times their size.

Merlins have a reputation for being pint-sized punks among raptors. The merlin is a member of the falcon family, which also includes birds like the American kestrel and peregrine falcon. I once saw a merlin harassing a turkey vulture, diving on the much larger but less agile bird until the vulture finally veered in another direction. This observation reinforces the merlin’s reputation for aggressively meeting incursions into its territory by other raptors. The merlin has long been associated with the forests of North America and Eurasia, but in recent decades it has proven capable of adapting to life in urban landscapes.

Photo by Bryan Stevens • Blue-gray gnatcatchers are noisy and, quite often, quarrelsome birds that don’t let their small size get in the way of attempting to intimidate other birds.

Blue-gray gnatcatchers are noisy, scolding songbirds at the best of times. They are also determined to protect their nesting territories at all costs and will attack much larger birds. They don’t hesitate to call for reinforcements when warranted. They will drum up a brigade of feisty, feathered fighters to repel intrusions by potential predators too large for a gnatcatcher and its mate to handle on their own. In North America, the gnatcatcher ranks in size with birds like kinglets and hummingbirds. Despite its diminutive status, the gnatcatcher acknowledges no superiors.

Photo by BlenderTimer/Pixabay.com • In a family of rather insufferable bullies, the rufous hummingbird stands out as particularly pugnacious.

In a family known for cantankerous behavior, one hummingbird stands out. In North America, the rufous hummingbird has a reputation for having a bad temper. These tiny birds with huge metabolisms must compete fiercely for resources, but they often appear go out of their way to attack other hummingbirds. The rufous hummingbird ranges along North America’s Pacific Coast and the Rockies as far north as Alaska and western Canada. A migration quirk occasionally brings these hummingbirds to Northeast Tennessee during fall and early winter. 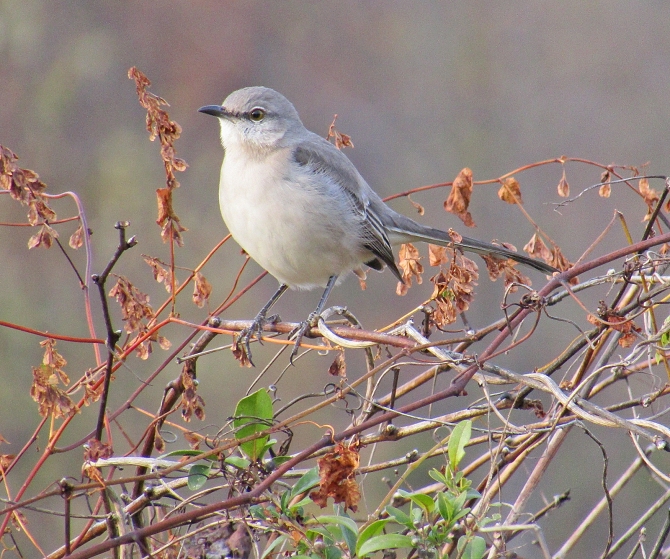 Photo by Bryan Stevens • The Northern mockingbird is zealous in defending its territory from other mockingbirds or any other intruders, including humans, cats, dogs, snakes and almost any other real or imagined threat.

I’m not sure every person who has had a Northern mockingbird nest in their yard or garden would describe the experience as a pleasant one. It’s not without cause that the mockingbird is often described as ruthless, aggressive and pugnacious in defense of its nest and young. These birds don’t hesitate to attack humans or their pets, such as cats and dogs, if any wander too far into their territory. In fact, mockingbirds appear to take positive glee in forcing intruders to flee. Early American naturalist and artist John James Audubon captured a dramatic moment when he painted a pair of mockingbirds defending its nest from a rattlesnake. The painting is also an early example of the ties between humans and mockingbirds. The nest is located in a hanging basket of yellow flowers. Even during Audubon’s time, mockingbirds had quietly adjusted to human activity and had deigned to allow us into their daily lives. It’s just best not to step out of line. Mockingbirds have ways of dealing with pushy people.