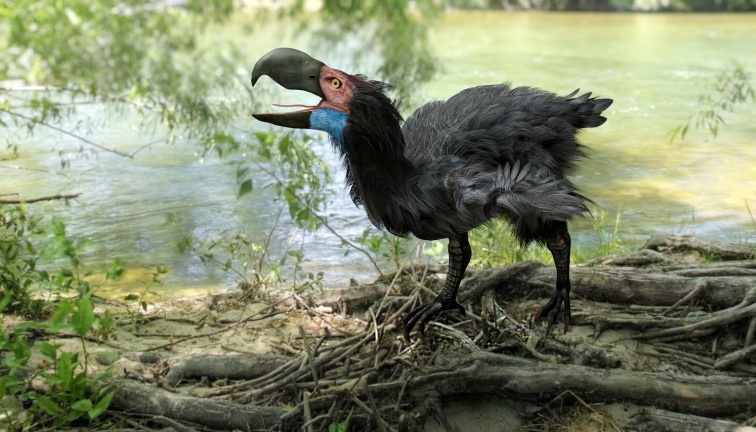 Illustration by Auntspray/Adobe Stock A lone gastornis walks by the edge of a river in this artist’s illustration of a member of an extinct avian family known as “Terror Birds.” These large flightless birds arose as apex predators in much of their domain.

Giant eagles, terror birds, and rocs! Oh my! While begging the pardon of the clever writers of 1939’s film “The Wizard of Oz,” I thought I’d focus on some of the more terrifying birds to ever roam the planet as we move closer to Halloween later this month.

Photo by Couleur/Pixabay.com • A white-tailed eagle is one of the world’s larger eagles, but even this large raptor would have been dwarfed by the now-extinct Haast’s eagle that once hunted giant moas in New Zealand.

In the not-so-distant past, an eagle in New Zealand achieved status as an apex feathered predator that specialized in preying on some of the largest birds to ever live.

Known as Haast’s eagle, this now-extinct raptor had a body size about 40 percent larger than even the largest of today’s eagles. Females probably reached a weight of 22 to 33 pounds. Males, as is the case with most living eagles today, were smaller than females but still probably weighed between 20 to 26 pounds. This gigantic eagle, however, possessed a relatively short wingspan of roughly 8 to 10 feet wide, which compares to that recorded for large specimens of golden eagle and Steller’s sea eagle.

This huge raptor was a major predator on the population of New Zealand moas, a large flightless and wingless bird somewhat reminiscent of modern ostriches. In direct comparison with the moas, these New Zealand eagles were almost puny. Some moas reached a height of 12 feet tall and a weight of more than 500 pounds. Despite their superior size and weight, however, moas simply lacked any defense against the huge razor-like talons and sharp beak of the Haast’s Eagle. An attack by such a well-equipped bird of prey must have been devastating to their prey. If Haast’s eagle was anything like many modern predators, it probably chose to hunt young, infirm or elderly moas rather than an adult moa in prime health.

Back in 2009, Associated Press writer Michael Casey speculated in an article on Haast’s eagle that this bird of prey might have included humans on the menu. Casey wrote that in recent years the scientific opinion on Haast’s eagle has evolved. Once thought to be a mere scavenger like vultures, most experts now think Haast’s eagle was a capable and efficient predator.

There is no direct evidence that the eagle, which went extinct about 500 years ago, ever dined on humans. Casey does mention the legend of the pouakai, which was a giant bird with a reputation for launching sudden attacks on people and fully capable of killing a small child. 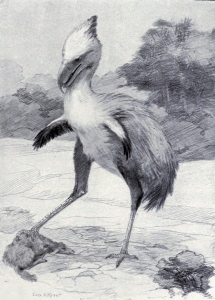 Artist Charles Knight, famous for now outdated depictions of dinosaurs, illustrated his version of a “terror bird” back in 1901.

Terror birds were prehistoric forebears to Haast’s eagle. More accurately known as Phorusrhacids, the “terror birds” were an extinct clade of large carnivorous flightless birds that were the largest species of apex predators in South America during the period of prehistory known as “The Age of Mammals.”

Unlike Haast’s eagle, which was fully capable of flight, the terror birds were flightless like the extinct moas and our modern ostriches, emus and cassowaries. The tallest of the terror birds stood 10 feet tall, but some members of the family were considerably smaller, reaching a height between two and three feet.

The larger species included birds such as Titanis walleri, Phorusrhacos ameghino and Kelenken guillermoi. With a skull more than 28 inches long, Kelenken possessed the largest head of any known bird. Some members of the diverse terror bird family even ranged into what is now the southern United States. Fossils of some of these ancient birds have been found in Florida and Texas. As the saying goes, everything’s bigger in Texas.

Mammals of various sizes provided a smorgasbord for the terror birds, which were more than capable of running down prey and dispatching it with a heavy, hooked beak. While it would be fascinating to still have terror birds roaming the globe, I have to admit that I prefer that the birds content themselves with sunflower seeds and suet cakes rather than considering whether I might make a nice addition to the menu.

This color illustration by Charles Maurice Detmold depicts the legendary roc and its elephant prey.

Legend of the Roc

While descriptions of the mythical roc make this bird sound like a truly horrifying feathered terror, the actual creature behind the origins of this incredible beast was actually a placid herbivore.

The roc arose in the fabulous fables of the Middle East. The famous compilation of stories known as One Thousand and One Nights features accounts of the monstrous roc, a bird deemed capable of seizing and carrying off prey as large as a fully grown elephant.

In reality, discoveries of the eggs of a bird now known to science as the extinct Vorombe titan likely inspired the myth of the roc. Vorombe titan stood almost 10 feet tall and weighed 1,600 pounds. The largest living bird today is the common ostrich. Males ostriches can reach a height of 9 feet and weigh 250 pounds, which means Vorombe titan would have dwarfed modern ostriches.

Native to the island of Madagascar, Vorombe titan and its relatives went extinct about a thousand years ago. Explorers from Middle Eastern countries returned from the island of Madagascar with egg shells that provided strong evidence of a giant bird and led to the legend of the roc, or elephant bird. The eggs of this bird were indeed impressive. The eggs were 13 inches long and 3 feet, 3 inches in circumference. About 160 chicken eggs could have fit inside a Vorombe titan’s egg.

The family of birds known as kiwis are considered the closest living relatives of the giant moas.

Once thought to be related to ratites, which includes modern ostriches, emus and cassowaries, Vorombe titan’s closest living relatives are probably the kiwis, a family of flightless birds that still exists in New Zealand. Like the kiwi, Vorombe titan, or the legendary roc, was a gentle, near-sighted herbivore.

While the imaginative mind can spin interesting scenarios with these gone-but-not-forgotten monsters, I think I’ll confine my birding to warblers, hummingbirds and other backyard birds.