Photo by fotocitizen/Pixabay.com • An American robin fluffs its feathers to stay warm on a cold, wintry day. While the robin is a migratory bird, it’s not unusual for many individuals to forego migration in order to stay on their nesting range the whole year.

A stroll on some walking trails through the woods on Jan. 11 near my home resulted in my first 2020 observation of American robins. The presence of robins during the winter can be a hit-or-miss affair. After I posted my sighting on Facebook, I received plenty of anecdotal evidence to support my belief that many robins decided to skip migration this past fall and spend the winter in the region.

Jennifer Bauer, park superintendent for Sycamore Shoals State Historic Park in Elizabethton, Tennessee, posted that she saw a flock of about 25 robins at the park on Jan. 10.

Anne Powell Cowan, a resident of Bristol, Tennessee, commented that she has seen robins in Bristol all winter. “They never left,” Anne wrote in her comment. “We also have a red-headed woodpecker at our farm in Sullivan County.”

Betty Lacy in Elizabethton, Tennessee, posted that she is hosting a “swarm” of robins. “They love my tall hemlock hedges,” Betty wrote. “I know there was well over 100 of them. They have made little openings all over the hedge where they go in and out!”

Photo by Bryan Stevens •  American robins, prominent in lawns and gardens during their annual spring migration, will turn their attention to nesting duties as soon as spring arrives. For now, some are content to spend the cold winter season a little farther north than some of their kin.

Vivian Hicks has noticed plenty of robins, too. “Robins have been hopping around and feeding in my yard in Southwest Virginia,” Vivian posted.

Mimi Hale has noticed the same in Elizabethton, Tennessee. “Robins have been all over my yard for the last several weeks,” she commented on my post.

Dawn Peters, who resides in Jonesborough, Tennessee, posted that robins have been present at her home since before Christmas.

Gloria Walton Blevins in Damascus, Virginia, also indicated the robins haven’t flown south. “They have been in Damascus all winter,” Gloria commented.

Teresa Treadway in Elizabethton, Tennessee, offered a humorous take on the abundance of robins. “Mine were so confused, they never left,” Teresa posted.

It was left to Catherine Romaine Henderson of Greer, South Carolina, to leave a question on my post. “Does that mean an early spring?” Catherine wondered in reaction to this winter’s abundance of robins.

Photo by Bryan Stevens • An American robin perches on a branch. The robin is one of the best-known song birds in the United States.

The American robin is indeed widely held to be a harbinger of spring. Furthermore, the robin is a popular American bird. In fact, this bird has been designated the official state bird by Wisconsin and Michigan.

In truth, many robins forego migration to endure a few months of cold weather. Their ability to shift their diet from earthworms and insects to fruit and feeder fare helps robins eke out a living. Robins remain an abundant bird but their fondness for co-existing with humans can leave them vulnerable to pesticides applied to lawns and gardens.

According to the website, “All About Birds,” the American robin nests three times a year. On average, however, only 40 percent of robin nests succeed at fledging young. Even once out of the nest, young robins are vulnerable. The website estimates that only 25 percent of each year’s fledged robins will reach November. So, the young robins that join some of the large flocks people are seeing in the region are birds that have beaten the odds.

Photo by Bryan Stevens • Even once out of the nest, young robins, such as the one pictured here, are vulnerable. Experts estimate that only 25 percent of each year’s fledged robins will reach November.

Even the robins that do depart the region each fall don’t migrate far. Many robins that spend the summer in Canada or the United States only migrate as far as the Gulf States, southern Florida, southern California, Baja California and Mexico.

Robins are such friendly and engaging birds. If we can have them near us for 12 months of the year, who’s going to complain? They have even adapted to take food at feeders. If you’d like to try your luck at attracting robins to feeders, know that they like their sunflower seeds hulled. They will also eat mealworms, fruit, peanut hearts and suet. Robins prefer to feed on the ground or on an open platform feeder.

Photo by Bryan Stevens • While American robins like fruit when its available, they also spend a lot of time feeding on earthworms and insects.

Photo by Andrew Poynton/Pixabay.com • The European robin is a common garden bird in Great Britain and other countries in Europe. The American robin was given its common name when early English colonists were reminded of their own robin back in the Old World.

I received emails recently from Terry Fletcher, who lives on Vance Drive in Bristol, and Ernie Marburg from Abingdon, Virginia. Both emails involved flocks of birds, including American robins and cedar waxwings.

The past two days the robins have been going crazy in my small yard,” Terry wrote. “I live in a woodland area off Vance Drive.”

Terry described a flock of at least 40 robins passing through the relatively small yard. “They were also darting back and forth among the trees,” Terry wrote. “Any thoughts about this flurry of activity?

Ernie Marburg also sent me an email with a query about robins and waxwings.

“I haven’t had much to report recently, but yesterday and today I had large flocks of migrating birds,” Ernie noted. “Yesterday’s flock of cedar waxwings was extremely large.”

Ernie estimated the flock consisted of 400 to 500 individuals. He added that the flock rested for a time in his neighbor’s large oak trees and then went on its way.

Photo by Bryan Stevens • A cedar waxwing perches on a branch.

“The flock today was less exciting for me, but somewhat even larger than the waxwings,” Ernie noted. The second flock consisted mostly of European starlings with a few American robins in the mix.

Ernie observed the starlings in some neighboring dogwoods as they consumed red berries. His question involved the migration habits of the starlings, waxwings and robins.

The fact is that, although we don’t think of robins very much in winter, they are still very much present in the region. The same is true of waxwings and is particularly true about starlings.

Photo by Bryan Stevens • An American robin scans for prey in the grass and clover of a lawn.

The activity observed by Terry is just the way robins behave at time. The activity could have been an example of the birds sensing the approach of a weather front. The robins, reacting to changing conditions, were simply attempting to feed as much as they could before a change in the weather. arrived.

The American robin is a large bird in the thrush family, which in North America also includes such birds as Eastern bluebird, wood thrush, and Townsend’s solitaire.

In the British Isles, the European robin is simply known as “robin” or “robin redbreast.” When the first English colonists arrived in New England and other parts of colonial-era North America, they took pleasure in finding that some of the birdlife in the New World resembled familiar birds from their homeland. The red-breasted American robin looked like the bird they knew in the Old World as “robin,” which motivated them to name the New World bird “robin,” as well.

Other than the red breast, however, the two robins are not all that similar. The American robin is the larger of the two birds. Farther separating these two birds is the fact that the European robin is not a thrush but rather a member of the family of Old World flycatchers.

Photo by PublicDomainPhotos/Pixabay.com • A European robin sings from a perch.

In some ways, the two robins are similar. Both are fond of earthworms, spending a great deal of their time on the ground foraging for worms. They will also follow human gardeners at their work, waiting patiently for the followed person to disturb the soil with a spade or hoe and expose earthworms for the waiting bird. They are also rather tolerant of humans and have learned to make their own homes close to human dwellings.

Some of the British transplants to North America must have felt homesick for familiar things because several unsuccessful attempts were made to introduce the European robin to the United States and Canada. European robins introduced in New York and Oregon failed to gain a foothold, unlike the introduction of such alien birds as the house sparrow and European starling.

On a few occasions, our American robins have overflown their destinations and ended up in the United Kingdom. For instance, an American robin became a first for London birdwatchers when one was found in that nation’s capital city in March of 2006. Whether of the European or American persuasion, robins have long been a favorite of birdwatchers and nature enthusiasts. 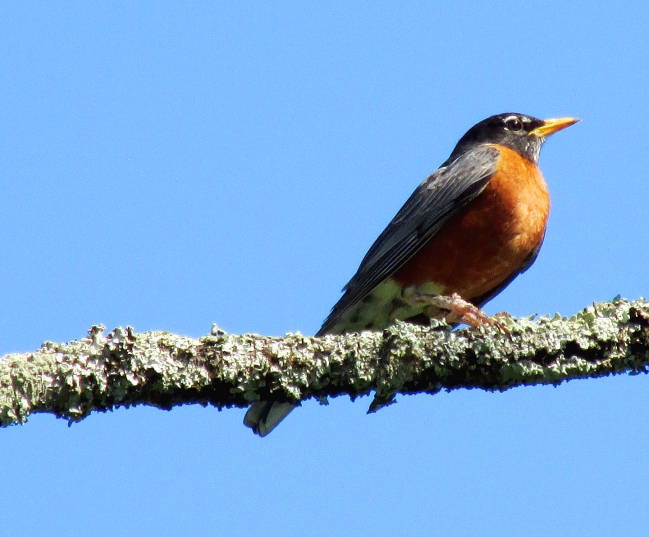 Photo by Bryan Stevens • An American robin perches on a tree branch and surveys its surroundings.