Photo by Roger Mullins • A little blue heron, right, shares a perch with a white ibis at the Buffalo Valley Golf Course in Unicoi. These wading birds are usually found near the coast, but individuals tend to disperse and wander widely after the summer nesting season comes to an end.

Late summer has a sort of lazy feel. Most birds are finishing up their nesting season. Hungry fledglings appear at feeders in the company of adults. In recent weeks, I’m starting to notice a slight uptick in the number of hummingbirds visiting my feeders and garden flowers. It helps that I’ve got dense stands of naturalized bee balm at the edge of my woods. The cedar waxwings have finished off the mulberries, but I suspect they will stick around for the wild cherries. I’ve also noticed the vanguard of migrant birds that are starting to make appearances as fall migration approaches. It’s not just songbirds, however, that are on the move. Some large and rather conspicuous birds have been attracting attention in recent weeks, including a variety of wading birds.

Sightings this summer of long-legged wading birds in Northeast Tennessee that are outside of their usual range have included little blue herons, white ibis and great egrets. The little blue heron and ibis have been recent visitors to Unicoi County. To toss another species into the mix, Tom and Cathy McNeil recently found an American anhinga near Austin Springs at Boone Lake in Washington County. Their anhinga sighting followed their discovery of seven or eight little blue herons and 14 great egrets at this well-known birding hot spot.

Roger Mullins discovered both an immature little blue heron and an immature white ibis during one of his regular visits to scan the ponds along the former Buffalo Valley Golf Course in Unicoi.

“I first spotted the little blue on July 5, and then on July 10 I saw the white ibis standing just a few feet away on the same limb.

“Within minutes they were standing next to each other,” he continued. “They were even following each other from place to place, almost like they were siblings.”

Roger noted that the little blue heron gradually learned to trust him, but he could only get so close without making the bird feel uncomfortable.

“Being extremely patient, taking it slow and easy, is pretty much how I approach all wildlife, and it usually pays off well,” Roger shared.

“I first started visiting the golf course ponds back in the winter when someone told me about seeing a male hooded merganser there,” he noted. “There is not always an abundance of wildlife present, but I always check it out just in case. The best thing about these ponds is the consistent peace and tranquility, since people don’t usually go there for family recreation or to walk their dogs.”

Roger added that he doubted that the little blue heron would have lingered at a public park with more activity.

Most of my own observations of little blue herons have taken place in SouthCarolina, Georgia and Florida, although I have seen this species a couple of times in Tennessee. I have also found little blue herons more skittish than some herons and egrets.

Photo by Bryan Stevens • This photo of a little blue heron at Huntington Beach State Park, South Carolina, shows the intermediate phase of plumage that makes identification even more of a challenge.

While diverting storms can’t be ruled out for causing some unexpected birds to detour into the region, it’s also normal behavior for young wading birds to disperse far and wide after leaving the nest. North American waders, or wading birds, include such long-legged species as herons, egrets, bitterns, ibises, storks and spoonbills. Most species are associated with wetlands or coastal areas.

Late summer birding is usually a period of doldrums as heat and humidity can discourage birders as well as diminish bird activity. However, it’s also the time of year when birders can make some unexpected surprises as wandering waders explore uncharted territory.

The great egret – a larger relative of the little blue heron – became a motivational symbol for conservation with the foundation of the National Audubon Society in 1905. Today, the organization has nearly 500 local chapters, each of which is an independent non-profit organization voluntarily affiliated with the National Audubon Society. These chapters often organize birdwatching field trips and conservation-related activities. The National Audubon Society spearheaded efforts to end the mass slaughter of various bird species. Some birds were killed for food, but millions were also killed for their showy feathers that were destined to decorate stylish attire worn as a symbol of high fashion. As early as 1910, some states began passing legislation to abolish trade in bird plumes. The federal government also came to the assistance of birds with the Migratory Bird Treaty Act, which was a law first enacted in 1916 to implement measures to protect and conserve migratory birds. 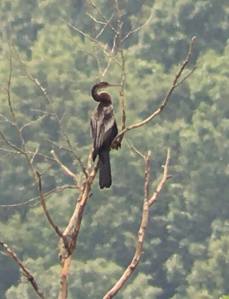 Photo by Tom McNeil • An American anhinga at Boone Lake found by Tom and Cathy McNeil represents an unusual find for the region. Even more unusual, Tom McNeil found another anhinga in Johnson County, Tennessee, a few days later.

Scientifically speaking, the little blue heron would be more accurately described as an egret. With the scientific name of Egretta caerulea, the little blue heron’s closest relatives are other members of the genus Egretta, which includes such other North American wading birds as snowy egret, reddish egret and tricolored heron. Other members of the genus found in other global localities include little egret, slaty egret and Chinese egret. I’m not sure why the tricolored heron and little blue heron were not named tricolored egret and little blue egret, but there are some Egretta species that also bear the name heron, including black heron, white-faced heron, Pacific reef heron and Western reef heron. It’s probably important to note that there are no real physical differences between herons and egrets. They are all classified together in the family Ardeidae.

I’m fairly confident that Roger’s sighting of a little blue heron is the first documented occurrence of the species in Unicoi County. His white ibis is unexpected but not unprecedented. An immature white ibis spent several days in July of 2011 at the ponds and fields at the home and farm of former Unicoi mayor Johnny Lynch. 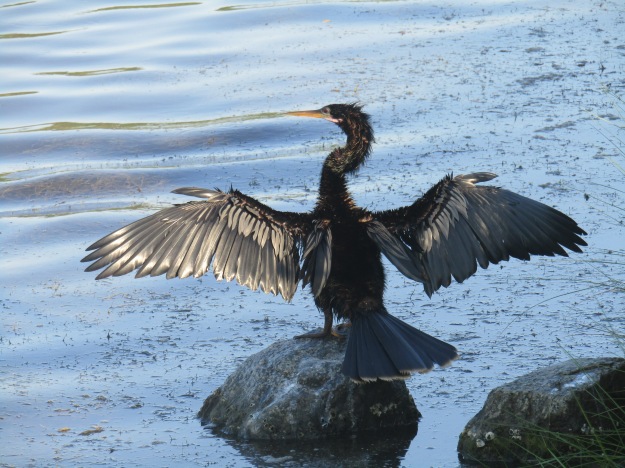 Photo by Bryan Stevens • An American Anhinga dries off feathers after a swim at Huntington Beach State Park in South Carolina.

As for the anhinga spotted by the McNeils, this rare visitor was found the following day by several area birders, including Michelle Sparks who relocated the anhinga from her kayak. The anhinga is a large waterbird with a slender neck and a dagger-shaped bill reminiscent of a heron’s bill. These birds spend much of their time swimming beneath the water, often with only their neck and bill above the surface. Apparently the term “anhinga” comes from a native tribe in Brazil. Anhingas prefer fresh water, but they are often found in coastal areas. Most reports from Tennessee come from near Reelfoot Lake in the western portion of the state. Other common names for the anhinga include “water turkey,” “snake bird,” “American darter” and “devil bird.” Worldwide, there are only four species of anhingas, or darters as they are called in other parts of the world. The other three are the Indian darter, the African darter and the Australian darter.

Tom shared an amusing anecdote on Facebook about their sighting of the anhinga.

“Cathy and I found this bird (the anhinga) yesterday evening out of absolute luck,” he wrote. “We had already birded the area and had some great fun observing the little blue herons and great egrets.  We stopped at the Austin Springs bridge for a few moments and saw four river otters playing under the bridge and then just decided to drive back the way we came.”

On their way back, Cathy had Tom stop so she could look at the “white birds” in the top of the trees across the water.

“We both pulled up our binoculars to look at them, but it was the bird perched below them that was the star of the show,” he reported. “We shouted ‘anhinga’  at the exact same time!”

That’s the beauty of birding – those “anhinga” moments. I’m hoping readers are enjoying some fun birds this summer. Share sightings, ask questions or make comments by emailing me at ahoodedwarbler@aol.com.