Photo by Bryan Stevens • A cedar waxwing perches on a branch while taking a break from flycatching insect prey near a community park pond.

Ernie Marburg, a resident of Abingdon, Virginia, shared an interesting observation about a flock of cedar waxwings he observed recently in his yard.

Waxwings have a brown and gray silky plumage, a black mask and a perky crest. Some of the wing feathers show red tips. The similarity of these wing tips to melted drops of wax gives these birds the common name of waxwing. 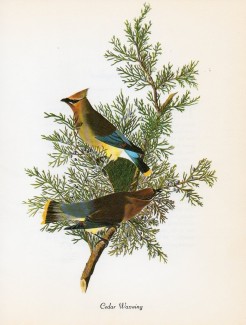 “The typical flock of waxwings has arrived,” he wrote in his email. He added that the birds exhibited an unusual behavior during their visit.

“From their roosts in the tops of some tall nearby trees, they appeared to be leaving their roosts briefly and returning to the trees as though they were catching flies,” Ernie noted. “There were, however, no flies available.”

The waxwings, he went on to explain, appeared to be going after snowflakes. “Could they have been going after the snowflakes to drink water?” Ernie asked.

While I wasn’t sure that catching snowflakes is an energy-efficient way to relieve thirst, the waxwings might have had a different motivation for their behavior. As I informed Ernie in my reply to his email, waxwings are very social with each other. These birds form large flocks that travel, feed, roost and bathe together. They have also come up with interesting “rituals” to reinforce their social ties with each other.

Photo by Bryan Stevens • The waxy tips to the wing feathers are evident in this photograph of a cedar waxwing.

These rituals, or games, they “play” with each other include a flock of perched birds passing a single berry or fruit in a line, one bird to another, without any of the birds eating the item. I speculated that snowflake catching was their idea of a fun game and a way to practice for fly-catching season, which is just around the corner.

Perhaps I should have conducted some research. As it turns out, other people have witnessed this snowflake-catching behavior, which has led those who have studied the birds to determine that the birds do indeed eat snowflakes to ease thirst. Apparently their diet, which is rich in sugar thanks to the various berries that provide a huge percentage of their food, waxwings are often afflicted with intense thirst. In addition to catching snowflakes, they have been observed eating fallen snow. A single Bohemian waxwing — a relative of the cedar waxwing — can gobble down 300 berries in a couple of hours. According to some statistics, one of these birds can eat up to three times its weight in fruit in a single day. The next time I am lucky enough to observe waxwings in a snowstorm, you can bet I will be watching for this snowflake-eating behavior.

The cedar waxwing has few relatives. Worldwide, there are only two other species: the Bohemian waxwing, which is native to the northern forests of Eurasia and North America; and the Japanese waxwing, found in such northeast Asian countries as Japan, Korea and China.

Photo by Bryan Stevens • Numbers of Ruby-throated Hummingbird in the region tend to fluctuate each year, but people should see a spike in their numbers as the hummingbirds end summer nesting and start migrating south again.

Hummingbirds due back soon

Waxwings are rather nomadic, coming and going with a maddening unpredictability. Other birds are more dependable, arriving and departing at roughly the same time year after year. One such bird should soon make its triumphant and welcome return to yards and gardens throughout the region. According to the website Hummingbird Guide, ruby-throated hummingbirds usually return to Tennessee and Virginia the first week of April. These tiny flying jewels arrive earlier in North and South Carolina, typically arriving the third week of March in those states.

The popularity of hummingbirds in general, and the ruby-throated hummingbird specifically, is simple to understand. These tiny birds are perfectly willing to insert themselves into our lives, offering hours of fascinating entertainment as they visit our gardens, duel at our sugar water feeders and occasionally even nest in trees and shrubs in our yards.

Individuals who feed birds know that it can be an expensive undertaking. The cost of providing sunflower seeds and suet cakes for hungry flocks during the winter months can nibble at the monthly budget, but hardly anyone would begrudge the sparrows, finches, wrens and woodpeckers. After all, they return the favor, putting on daily shows just outside our windows.

Photo by U.S. Fish & Wildlife Service • A male Ruby-throated Hummingbird hovers in front of the camera as it seeks nectar from tiny flower blossoms.

The same is true of hummingbirds. For a relatively modest investment, people putting out feeders or planting nectar-producing flowers are rewarded with the fun and amusing antics of these pint-sized and hyperactive birds.

Attracting hummingbirds is generally much less expensive than feeding other birds. After all, you need only a mixture of sugar water — four parts water to one part sugar — to fill a feeder and catch the attention of a visiting hummer. A few pounds of sugar will last a lot longer than that bag of sunflower seeds, and it’s much less expensive to purchase at the grocery store.

Do not add red coloring or dyes to your sugar water mixture. Some studies have indicated these substances are harmful to hummingbird health. This means tossing out many of the pre-packaged mixtures sold with sugar water feeders. After all, the entire purpose is to attract hummingbirds. Risking their health is simply not acceptable. If you do want to take extra steps to attract these diminutive, feathered sugar junkies, consider supplementing your landscape with a variety of flowering plants. To explore some of the best choices for flowers to tempt hummingbirds, visit the website of The Hummingbird Society at http://www.hummingbirdsociety.org.

Photo by Bryan Stevens • A ruby-throated hummingbird visits a feeder for a sip of sugar water.

I always put out my sugar water feeders in early April. I usually end up waiting a couple of weeks before the first hummingbird appears, but it’s worth the wait. I miss these tiny birds during the winter months, which they spend in much warmer surroundings in southern Mexico and Central America. A male with the namesake red throat is usually the first to appear at my feeders. However, female ruby-throated hummingbirds, which lack the dazzling ruby throat patch, are migrating, too. The females usually lag a week or two behind the pace of the migration for the males.

As always, I enjoy hearing from readers about their first spring sighting of a ruby-throated hummingbird. Readers are encouraged to jot down the date and the time of arrival when they observe their first hummingbird of the season. If the sighting’s duration allows you to verify, note whether the hummingbird was a male or female. These reports can be emailed to me at ahoodedwarbler@aol.com. Together, we’ll track the arrival of these tiny birds as they return to the region.