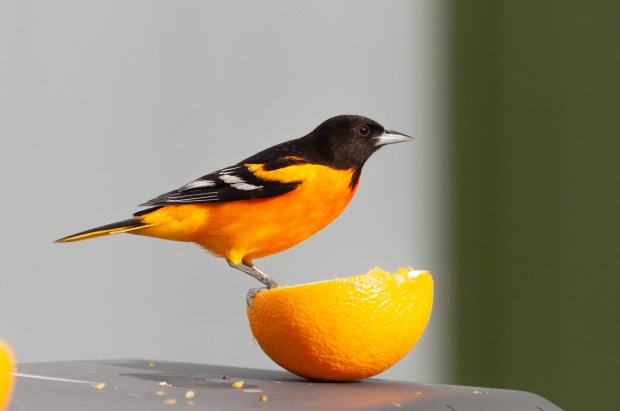 Photo by MillionPM/Pixabay.com • Oranges, as well as offerings of grape jelly, are often successful at luring Baltimore orioles to feeders.

Earlier this spring, Kaylynn Wilster, who resides in Jonesborough, Tennessee, emailed me for information about orioles.

“Do you know when the orioles return to our area?” Kaylynn asked. In her email, she also shared that she had a female Baltimore oriole gathering nesting materials in her yard last summer.

“I put out an oriole feeder this year,” she added. So far, she noted, only chickadees have discovered the grape jelly.

In addition, Brenda Hickman Dishner, who lives near Holston Dam in Bristol, Tennessee, contacted me through Facebook to ask if I have seen orioles in the area.

Brenda added that she has put out oriole feeders for the past three years with no luck.

Photo provided by Gloria Blevins • A male Baltimore Oriole visits a feeder at the Blevins home in Damascus, Virginia.

It seems many people are hoping to welcome these bright orange and black birds to their feeders. In my reply to Kaylynn and Brenda, I told them to expect orioles to arrive in late April and early May. I’ve found orioles uncommon visitors to my home, but my prediction on timing proved more or less correct.

Gloria Blevins shared a photo of the Baltimore orioles that have been visiting her home in Damascus, Virginia. In a Facebook message, she shared that the orioles have been feeding on grape jelly that she had provided them since May 2.

Although she no longer lives locally, Kathy Noblet has been seeing lots of Baltimore orioles at her home in Mount Vernon, Ohio, since late April. Her photographs of these colorful birds have been nothing short of amazing. She has shared new photographs on Facebook on an almost daily basis for the past couple of weeks.

“The orioles continue to come to my deck and pig out on grape jelly,” Kathy posted on May 6. “They are fun to watch!”

I also heard back from Kaylynn on May 15. “There was a male oriole getting a drink at my pond about four days ago,” she informed me in an email.

Photo by USFWS • Baltimore orioles, like this male, are members of the blackbird family, making them relatives of species such as Eastern meadowlarks, brown-headed cowbirds, common grackles and red-winged blackbirds.

The Baltimore oriole, despite its bright plumage, is a member of one of the blackbird clans, known in scientific circles as the Icterus genus. In his book, “Birds of Forest, Yard, and Thicket,” John Eastman notes that there are 26 species in the genus, eight of which nest in the United States.

In the eastern United States, there are only two orioles — the Baltimore oriole and its smaller relative, the orchard oriole. The western half of the nation is home to a half dozen orioles, including Bullock’s oriole, Scott’s oriole, Audubon’s oriole, hooded oriole and Altamira oriole. I saw several gaudy, noisy Bullock’s orioles during a trip to Utah in May of 2006.

Tall trees are an essential part of the Baltimore oriole’s favored habitat. Baltimore orioles are well-known for their colorful appearance, but their fame also rests with a sack-like nest that Eastman describes as a “durable marvel of tight-woven plant fibers” in his informational book. Eastman also notes that during another era in America, the Baltimore oriole often built its marvelous nests in American elms before Dutch elm disease almost eradicated these trees from the landscape. He reports that maples, willows and apples have served as nesting trees in the absence of elms. Once the hard-working female oriole sets to work, she may spend eight days or longer weaving plant fibers into a strong pouch suspended from the outer ends of drooping branches. The durability of the nest means that other birds, including house finches, may occupy the old nest once abandoned by the original inhabitant.

Orioles are present in the region from April to October, retreating to the American tropics for the winter. There they may live on plantations that produce such much-coveted crops as bananas, coffee and cacao, which is the essential ingredient for chocolate.

The Baltimore oriole is named in honor of one of the founding fathers of the state of Maryland. George Calvert, or Baron Baltimore, was an influential English colonist instrumental in establishing the colony of Maryland. His servants wore orange and black uniforms, which inspired early American naturalist Mark Catesby to name the bird the Baltimore oriole. The bird’s association with the the city of Baltimore and the state of Maryland have continued to this day. The bird is also famous as the namesake of one of America’s professional baseball teams.

Baltimore orioles eat insects and fruit, but these adaptive birds have also developed a fondness for sweet nectar. Orioles no longer have to raid sugar water feeders meant for hummingbirds. Many manufacturers of bird-feeding equipment now produce affordable sugar water feeders specifically designed for use by orioles. Many bird enthusiasts also use orange slices and grape jelly to lure orioles into their yards. I’ve tried these tricks, but I’ve attracted more gray catbirds and scarlet tanagers than I have orioles. In my book, that’s not a disappointment. I happen to like catbirds and tanagers.

With orioles, I’ve had better luck by refraining from a bit of pest control. Back in the late 1990s, I observed a male Baltimore oriole visiting a large caterpillar tent in the branches of a cherry tree. The bird methodically plucked the caterpillars from the silken tent, eating them one after the other. I’ve since learned that this is not an odd occurrence for Baltimore orioles. While many birds avoid spiny and hairy caterpillars, orioles actively seek them out and do a great service by reducing the damage these hungry caterpillars can inflict on the environment.

If you’re wanting to see orioles, I can share some area “hot spots” for these colorful birds. The waterfront at Winged Deer Park in Johnson City, Tennessee, has fewer tall trees than it did a few years ago, but the remaining trees still attract orioles. Warriors Path State Park in Kingsport, Tennessee, has long been a place that local birders depend on for sightings of Baltimore orioles. I also had some impressive sightings of both orioles at Hungry Mother State Park a few years ago. Although those birds could have been spring migrants, this park in Marion, Virginia, certainly offers habitat that orioles would find attractive.

Want more details on how to attract orioles to your yard using specialized feeders? Check out this helpful article from Birds and Blooms. https://www.birdsandblooms.com/birding/attracting-birds/bird-nesting/how-to-attract-orioles/ 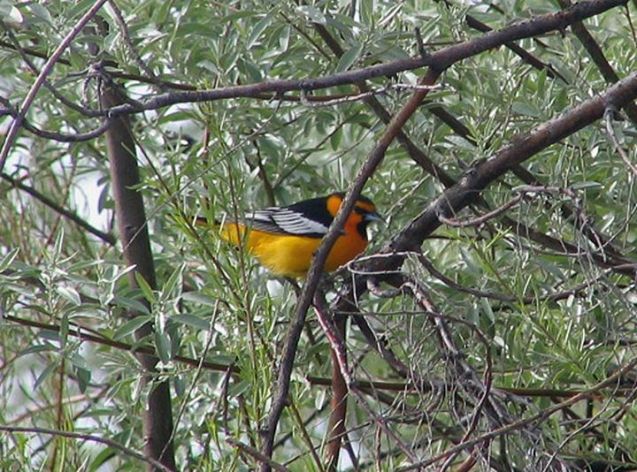 Photo by Bryan Stevens • In the western part of the United States, the Baltimore oriole is replaced by Bullock’s oriole.