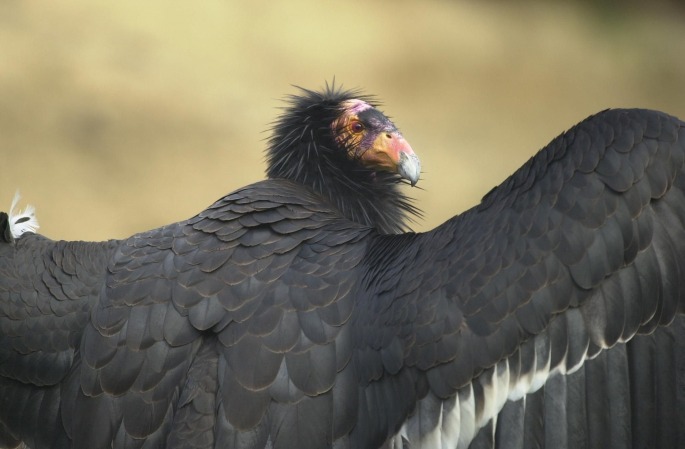 Photo by Public Domain Photos/Pixabay.com • California condors have gradually returned to parts of their range beyond California. A family of condors now resides in Zion National Park, marking a return of these birds to Utah.

Birds made headlines in 2019. Some species, having been presumed extinct, were rediscovered — some in the mostly unlikely of places. One of the major bird-related stories of the year involved a stark warning about a sharp decline in overall bird numbers. Below, in no particular order, are some of last year’s top stories about our fine feathered friends.

69 years old and a mother again

The Laysan albatross known as Wisdom and her mate, Akeakamai, became parents again in 2010. Wisdom is at least 69 years old and ranks as the world’s oldest known banded wild bird. Her mate’s name, by the way, translates as “lover of wisdom.” The chick hatched in February at Midway Atoll National Wildlife Refuge and Battle of Midway National Memorial. Wisdom has raised more than 30 chicks in her lifetime. While Laysan albatrosses are not considered endangered, some of their kin are threatened with extinction.

Photo by J. Klavitter/USFWS • Wisdom, one of Midway Atoll’s oldest residents, became a mother again in 2019. The female Laysan albatross is approaching her 70th birthday.

While walking to church

The year started with some good birding news when a bird thought extinct was rediscovered in a suburb of Medellín, Colombia, on Jan. 7, 2019. Rodolfo Correa Peña was headed to a church service when he spotted an odd bird in a garden. The bird turned out to be an Antioquia brushfinch, a bird known previously only from museum specimens. Peña, an engineering student with an interest in birding, knew the local brushfinches and recognized that the bird was different. He secured photos of the bird and stunned the scientific community with the rediscovery of a bird presumed extinct. 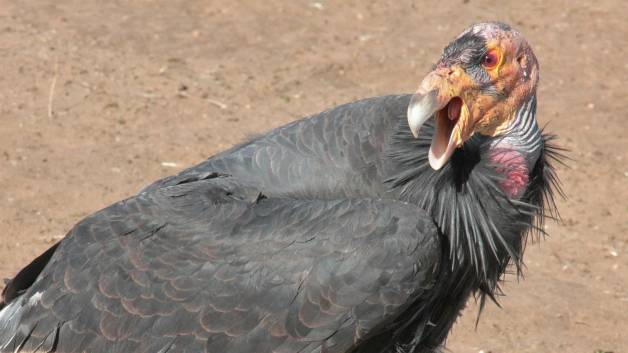 California condors continue to delight with their success stories, even extending their range beyond California. Estimates indicate that 300 condors exist in the wild with about 200 more birds in captivity for use with breeding programs. Evidence that the work to preserve the species is working was provided this year in Utah’s Zion National Park, which became home to a condor named “1K” because it is the 1,000th chick hatched as part of an extensive condor restoration program. The chick hatched in May and took a rather clumsy first flight in September. The chick represents the first condor born within Zion National Park in more than a century. In 1987, when the condor population totaled only 27 known condors, wildlife officials captured the surviving wild birds and made them part of an existing captive breeding program. In 1992, the condor recovery program started to release the birds back into the wild. There are now more condors flying free in the wild than are maintained in captivity.

Photo by Bryan Stevens
A large flock of Great Egrets flies over the Watauga River in Elizabethton. There is mounting evidence that many bird populations are on the decline.

Bird enthusiasts were shaken by the publication in September of an article warning that the number of birds in the United States and Canada has fallen by 29 percent since 1970. The analysis, published in the journal “Science,” is an extensive attempt to determine what is happening to avian populations. The results shocked — there are 2.9 billion fewer birds taking wing now than there were 50 years ago.

A painting of an Ivory-billed Woodpecker by Mark Catesby, an English naturalist.

Yet, in words penned by poet Emily Dickinson, “Hope is the thing with feathers.” Birds are among the most resilient lifeforms on the planet. If humans can get out of the way and quit making life more difficult for the feathered inhabitants of the planet, birds are more than capable of rebounding. The federal government needs to maintain safeguards and regulations that are in place to protect birds while ordinary people must alter their ways by shunning pesticides, preserving a variety of habitats and simply giving more regard to the fellow creatures they share the Earth with. If we can do these things, the birds will be fine. Don’t take my word for it. Look at the examples of Wisdom the Laysan albatross and a California condor known as “1K.” 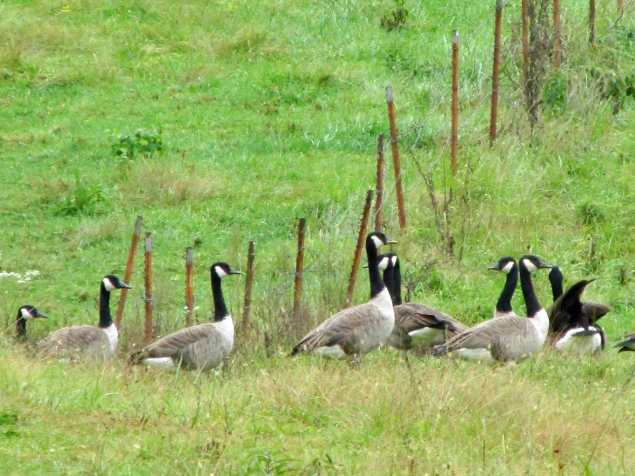 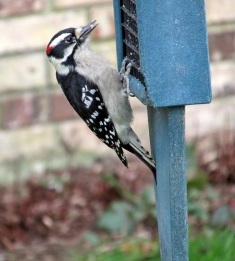 In recent posts, I’ve discussed the yellow-bellied sapsucker, a definite oddball among the region’s woodpeckers, as well as the downy woodpecker, which is the smallest member of this clan of tree-hugging birds. This week I’d like to discuss the pileated woodpecker. On the other end of the size scale from the downy, the pileated woodpecker ranks as the largest member of this family of birds to make its home in the United States. 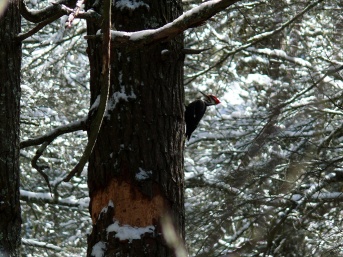 The large pileated woodpecker — it’s the size of a crow — never fails to impress. This bird has a loud, raucous cackling call, which is often heard before the bird is observed. This woodpecker spends a good amount of its time low to the ground, so when one takes flight unexpectedly, often calling loudly as its powerful wing beats carry it away from an observer, the moment can be somewhat startling. These experiences of sudden and unexpected sightings of one of these woodpeckers is often accompanied by exclamations of surprise. Hence common names such as “wood-hen” and “Lord God Bird” have been adopted for these woodpeckers. Other names for the pileated have included carpenter bird, cock-of-the-woods and wood-hen.

Although the pileated woodpecker can reach a length of 19 inches, the bird weighs only about 11 ounces. Male and female look similar with a black and white body and a bright red crest. Males show a red stripe — or mustache — on the cheek that is not present in females. 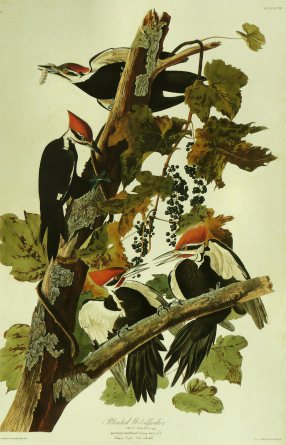 Early naturalist and painter John James Audubon painted these pileated woodpeckers in the process of foraging for food.

As mentioned earlier, the pileated woodpecker often can be found low to the ground, foraging on tree stumps and fallen logs, as well as in taller, living trees. The reason for this behavior rests with one of its favorite foods — the humble carpenter ant. The pileated is not the only woodpecker that supplements its diet with ants. For instance, the Northern flicker is also fond of dining on these insects. Studies conducted on the dietary preferences of pileated woodpeckers have revealed that as much as 40 percent of the diet is made up of ants. Some pileated woodpeckers appear to have developed quite an addiction for ants with some individuals dining almost exclusively on ants. These woodpeckers also eat wild fruits and nuts, as well as other insects and their larvae. The pileated woodpecker will occasionally visit a feeder for suet or seeds, but I’ve not had much luck overcoming their instinctive wariness.

Pileated woodpeckers — usually a mated pair — have been among my wild neighbors for years, but they are shy, retiring birds. Despite their bold appearance and capacity for making quite a racket, the pileated woodpecker usually goes out of its way not to attract attention to itself. Because of this, close-up observations of the largest of our woodpeckers are experiences to savor.

The bird’s enthusiastic ability to excavate cavities in rotten trees is a boon to other species of birds. Certain species of ducks as well as owls, bats, squirrels and other species of wildlife will often make use of cavities created by pileated woodpeckers for roosting locations or to raise their own young.

Worldwide, there are about 180 different woodpeckers, but the family is conspicuous in its absence from Australia, Madagascar and New Zealand. The pileated woodpecker ranges across the continent, with birds present in the forests across Canada and the eastern United States as well as certain areas along the Pacific coast.