Photo by Bryan Stevens • A Ruby-throated Hummingbird perches on a sugar water feeder.

A voiceover for a promotional trailer for an upcoming movie in the Jurassic Park franchise asks the question “Do you remember the first time you saw a dinosaur?” and answers it with the sentence “The first time you see them, it’s like a miracle!”

Dinosaurs, of course, have impressed humans with immense size ever since their enormous fossils began to be uncovered. Hummingbirds also impress with size, or rather the lack of it. It’s that tiny size that has prompted people to describe them as “miracles” from the time the first European explorers sailed to the New World in the late 1400s. When Spanish explorers first encountered them, they had no equivalent birds in Europe to use as a reference. They referred to hummingbirds as “joyas voladoras,” or flying jewels.

So, how many remember their first sighting of a hummingbird? These tiny birds, still accurately and often described as flying gems, are worthy of the word “miracle” being used to define them. When we see the ruby-throated hummingbirds return to the region every spring, our belief in miracles is strengthened.

I still have readers sharing reports of their first hummingbird sightings this spring.

• Marty Huber and Jo Ann Detta in Abingdon, Virginia, sent me an email about their first spring hummingbird sighting.

They reported that they got their first look at a spring hummingbird on April 18 at 5:04 p.m. “We were excited and have been looking since the beginning of the month,” they wrote. “Last year we didn’t see our first until April 23.”

• Ed and Rebecca Feaster of Piney Flats, Tennessee, put out their feeders after reading one of my columns earlier in April.

“We are happy to report that we saw a little female ruby-throated hummer on the morning of April 20,” they wrote in their email. “We were thankful to offer her nectar as she seemed very, very hungry!”

The Feasters noted that they have been in the Tri-Cities area for three years.

They had previously lived more than 20 years in the Roanoke Valley. “Birders in that area said to look for the hummers to arrive when the azaleas bloom,” they wrote. “The same seems to hold true here as the ones around our home began to blossom just a couple days ago.”

• Jane Arnold, a resident of Bristol, Virginia, sent me an email about her first hummer sighting.

“Just wanted to let you know that my first hummer of the year arrived at 10:20 a.m. Saturday, April 21,” she wrote. “I was so excited to see him! I had taken my feeder out to hang (it was sitting on a table) and [the hummingbird] flew to it.”

The Morrells saw both a male and female hummingbird. “We are located behind South Holston Dam,” Don added. “We are glad our friends are back. Also on that same day we saw an eagle and white crane.”

Photo by Bryan Stevens • A migrating Great Egret makes a stop at a golf course pond.

Most likely the white crane was a great egret, which is also migrating through the region right now. Although often called cranes, egrets are part of the family of wading birds that includes herons. North America’s true cranes are the endangered whooping crane and the sandhill crane.

Photo Courtesy of Helen Whited • A Baltimore Oriole visits a feeder “baited” with an orange slice.

“It came looking at the thistle seed feeder that is red,” she reported. “I had not put up the sugar water feeder, but I did today.”

Of course, we are in the midst of spring migration, which means hummingbirds are hardly the only new arrivals.

• Helen Whited in Abingdon, Virginia, has seen two very brightly-colored species of birds pass through her yard this spring. On April 17, her feeders were visited by male rose-breasted grosbeaks. “I am so excited to see my first grosbeaks,” she shared in an email that also contained a photo featuring two of the visiting grosbeaks. On April 21, Helen sent me another email with a photo of a male Baltimore oriole visiting a specially designed feeder made to hold orange slices to attract fruit-loving orioles. Grosbeaks and orioles are two migrant species of birds that deliver splashes of tropical color to the region each year.

Helen had prepared for the visit by the Baltimore oriole. In an email from last year, she had told me that her husband had promised her an oriole feeder for her birthday. I’m glad she’s been able to report success in bringing one of these bright orange and black birds to her yard.

• Anita Huffman of Rugby, Virginia, saw a male rose-breasted grosbeak on April 22. She reported her sighting on Bristol-Birds, a network for sharing postings about bird observations in the region.

• John Harty, a resident of Bristol, Tennessee, sought my help with identifying a new bird in his yard. Based on his description of the bird — the shape of a robin, reddish-brown coloration and a taste for suet cakes at John’s feeder — I suggested that his bird was probably a brown thrasher.

Brown thrashers returned to my home in late March and almost immediately sought out my suet feeders. Other recent arrivals have included several warblers — hooded, black-throated green and black-and-white — as well as tree swallows, which immediately got down to the business of selecting a nesting box. All of these birds nest in the gardens and woods around my home.

Some birds, however, announce their arrival not with bright colors but with beautiful songs. On April 23, I listened as a wood thrush sang its flute-like song from the edge of the woods just outside my bedroom window. The sweet song of this thrush is one of my favorite sounds of spring.

Every bird is a miracle, whether you’re seeing or hearing them for the first time or welcoming them back for another spring and summer season. 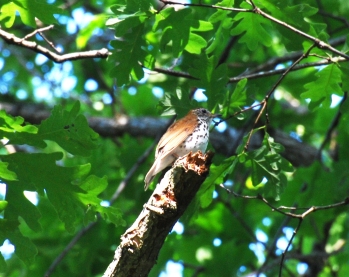 Kathy Shearer, who resides in Emory, Virginia, sent me a recent email asking for help with bird identification.
“My husband and I hear this lovely bird song in the evenings and early morning close to our house, which is in the woods at Emory,” she explained in her email. She also attached an audio recording of the mystery singer and asked me to listen to the file.

I did so, and from the very first of the flute-like notes, I recognized the singing bird as a wood thrush, one of the most talented avian songsters in North America.I’ve been hearing singing wood thrushes in the woods near my home during the evenings, often in the wake of some energetic but short-lived July thunderstorms.

The wood thrush has a well-developed organ called a syrinx, which is the human equivalent of a larynx or voice box. For many songbirds, such as the thrushes, this specialized organ is more like a double voice box that permits the birds to produce two notes simultaneously while singing its song.

The wood thrush is one of the larger brown thrushes, which also includes such related birds as Swainson’s thrush, veery, gray-cheeked thrush and hermit thrush. Other less closely related members of the thrush family include the American robin, Eastern bluebird and Townsend’s solitaire.

The wood thrush is a fairly common bird in the region from April to October. Wood thrushes migrate south in the fall, dispersing to Mexico and Central America for the winter months.

The shy wood thrush does not usually venture too far from its preferred woodland habitat, but freshly disturbed soil in a garden will attract these birds as they seek out earthworms and insect larvae. Wood thrushes also feed on various fruits and berries, which means they can be attracted by plantings of suitable trees and shrubs.

The poet Walt Whitman incorporated the hermit thrush and its melancholic song in his elegy to the assassinated President Abraham Lincoln.

The wood thrush, like many of its relatives, sings mainly in the early morning and again in the evening hours. Listening to the song of this bird from a comfortable seat on a deck or porch is a great way to conclude the day.

The poet Walt Whitman employed a thrush as a symbol in his poem, “When Lilacs Last in the Dooryard Bloom’d,” a moving pastoral elegy in honor of the assassinated President Abraham Lincoln.

Whitman evidently knew his birds, and it’s not difficult to identify that he referred to the hermit thrush when he wove this songbird as a symbol into his stanzas honoring Lincoln.

“Sing on there in the swamp,” Whitman wrote in his poem. “O singer bashful and tender, I hear your notes, I hear your call. I hear, I come presently, I understand you…” 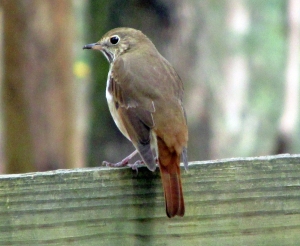 Photo by Bryan Stevens The hermit thrush, pictured, and wood thrush are rivals for title of best singer among North America’s songbirds.

Whitman and many other Americans have been made fans of this gifted songbird. In fact, the citizens of Vermont even proclaimed the hermit thrush as their official state bird.
•••••
Bryan Stevens lives near Roan Mountain, Tennessee. To learn more about birds and other topics from the natural world, friend Stevens on Facebook at https://www.facebook.com/ahoodedwarbler. He is always posting about local birds, wildlife, flowers, insects and much more. If you have a question, wish to make a comment or share a sighting, email ahoodedwarbler@aol.com.