The shopping days before Christmas are getting fewer, so I hope everyone has had time to find gifts for everyone on their lists. My own sincere wish to readers is that everyone gets to enjoy a great holiday that just might also include watching some birds. 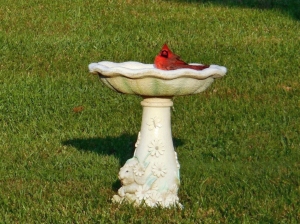 Although I hate to see the colorful birds of spring and summer — scarlet tanagers, Baltimore orioles, indigo buntings, rose-breasted grosbeaks — depart every fall, the winter season offers some compensation.

Often, when we think of the birds of the winter season, our thoughts focus on some of the less-than-colorful feeder visitors — the brown sparrows and wrens, the black and white chickadees, the drab American goldfinches so unlike their summer appearance.

There’s one bird, however, that makes an impression in any season. The Northern cardinal, especially the brilliant red male, stands out against a winter backdrop of snow white, deep green or drab gray. 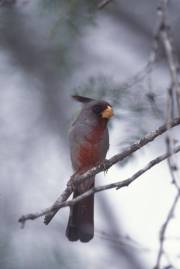 Photo by U.S. Fish & Wildlife Service
The Pyrrhuloxia is a relative of the Northern Cardinal found in the southwestern United States.

The Northern cardinal belongs to a genus of birds known as Cardinalis in the family Cardinalidae. There are only two other species in this genus, and they range across North America and into northern South America. The two relatives are the pyrrhuloxia, or Cardinalis sinuatus, of the southwestern United States, and the Vermilion Cardinal, or phoeniceus, a bird found in Colombia and Venezuela.

Over the years, the Northern cardinal has also become associated with the Christmas season. How many Christmas cards have you received this holiday season with a cardinal featured in the artwork? I’d wager that at least a few cards in any assortment of holiday greetings will feature the likeness of a bright red cardinal.

This sample Christmas card from cardinalchristmascards.com is a good example of the way Christmas cards often depict this beautiful bird.

Cardinals, also known by such common names as redbird and Virginia nightingale, are easily recognized backyard birds. I never tire of observing these colorful birds. Cardinals are easily lured to any backyard with plentiful cover to provide a sense of security and a generous buffet of sunflower seed.

Cardinals accept a wide variety of food at feeders. Sunflower seed is probably their favorite, but they will also sample cracked corn, peanuts, millet, bakery scraps and even suet. The cardinal is also one of only a few birds that I have noticed will consistently feed on safflower seed.

While we may get the idea that cardinals feed largely on seed, that is a misconception based on our observation of the birds at our feeders. When away from our feeders, cardinals feed on insects and fruit, including the berries of mulberry, holly, pokeberry, elderberry, Russian olive, dogwood and sumac. 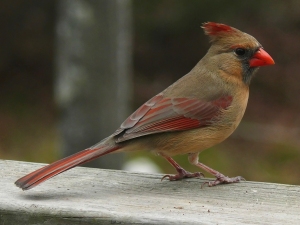 There’s no difficulty in identifying a cardinal. The male boasts crimson plumage, a crest, a black face and orange bill. The female, although less colorful, is also crested. Female cardinals are soft brown in color, with varying degrees of a reddish tinge in their feathers, particularly in their wings. Immature cardinals resemble females except young cardinals have dark bills.

Cardinals are a widespread species, ranging westward to the Dakotas and south to the Gulf Coast and Texas. The southeastern United States was once the stronghold of the cardinal population. In the past century, however, cardinals have expanded their range into New England and Canada.

Photo by Jean Potter
A pair of Northern Cardinals perch on a feeder for a meal of various seeds.

At feeders, cardinals mingle with a variety of other birds. Their preference for dense, tangled habitat is one they share with such birds as brown thrashers, Eastern towhees, Carolina wrens and song sparrows. In general, however, cardinals directly associate only with their own kind. Cardinals will form loose flocks during the winter, but these flocks are never as cohesive as those of such flocking birds as American goldfinches. Cardinals are more often observed in pairs.

For such a bright bird, the male cardinal can be surprisingly difficult to detect as he hides in the thick brush that conceals his presence. Cardinals are nervous birds, however, and usually betray their presence with easily recognized chip notes.

It’s not surprising that such a popular bird has also become associated with many trappings of the Christmas season.
“You see cardinals on greeting cards, stationery, paper plates, paper napkins and tablecloths, doormats, light switch plates, candles, candle holders, coffee mugs, plates, glasses, Christmas tree ornaments and lights, bookmarks, mailboxes, Christmas jewelry,” writes June Osborne in her book The Cardinal. “And the list goes on. Cardinals have become an integral part of the way that many people celebrate the holiday season.” 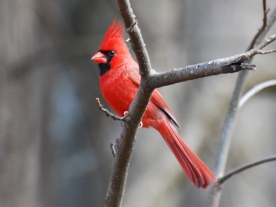 I can be included among such people. My Christmas decorations include an assortment of cardinal figurines and ornaments. There are other birds — doves and penguins for example — associated with the holiday season, but for me the holidays magnify the importance of one of my favorite birds. The cardinal, in its festive red plumage, appears made to order for a symbol of the holiday season.

Photo by U.S. Fish and Wildlife Service              A male Northern Cardinal perches on a branch on a snowy winter’s day.

Even once the holidays are past, there’s nothing like a glimpse of a Northern cardinal to add some cheer to a bleak winter day.