For Bluff City, Tennessee, resident Donna Ottinger, the show in her front yard beats anything you might find on television this summer. Since late July, Donna has been watching a female ruby-throated hummingbird that she has named Bliss carry out her nesting duties. 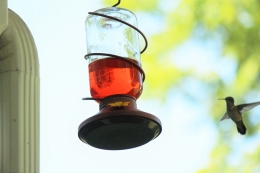 Photo Courtesy of Donna Ottinger                  Bliss the ruby-throated hummingbird visits a feeder for a sip of sugar water.

Like all female ruby-throated hummingbirds, Bliss produced two eggs for containment in a delicate nest of spiderweb, lichen and plant fibers woven onto a maple tree branch. There are some reasons why it’s always a pair of eggs for hummingbirds. First, the nest is so small — about the size of a walnut half-shell — that there is barely room for two eggs, let alone more. Second, once the young hatch, the nest has just enough room to accommodate them as they grow, fed well by their mother. Third, feeding two hungry young hummingbirds is a demanding task. A female hummingbird has to find enough food to fuel her own body and help her young in the nest grow and thrive. It’s a full-time job during the daylight hours. She’s pressed hard to succeed at raising two young. Attempting to rear more would most likely prove impossible.

Donna compared the two tiny eggs to Tic Tac mints. The entire process — from building the nest to incubating eggs to tending hatchlings — requires a commitment of more than two months. Donna noted that even after the young hummingbirds hatched, Bliss continued to reinforce the nest with collected silk from spider webs.

Donna kept the nest under observation after she discovered it in late July. As she noted on her Facebook page, finding a hummingbird nest is not an everyday occurrence. The nest is on one of the lower branches of a large maple tree in her front yard only a short distance from her porch. She was able to sit comfortably while watching Bliss come and go to her tiny nest. 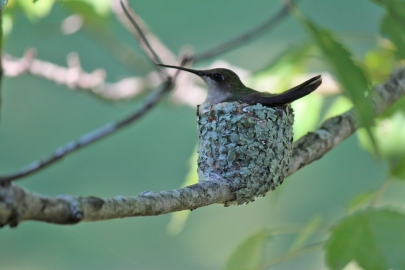 “It’s been a real blessing,” Donna told me when we met in person on Aug. 19. She was gracious enough to permit my mom and me to sit on her front porch and enjoy the show. During our visit, we got to watch as Bliss arrived to feed the babies. It’s not a spectacle for the squeamish. Bliss plunged her long bill deep into the throats of each baby bird in turn and pumped some nutritious contents into the growing youngsters. Despite the fact that it looked like she could easily impale the babies, they suffered no ill effects and looked quite full and satisfied after the visit. 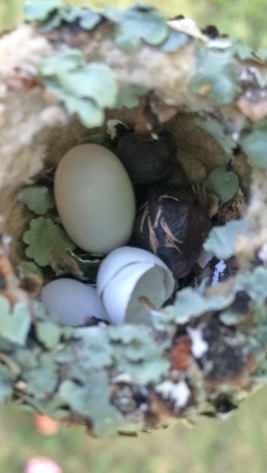 The two babies were hatched on Aug. 1 and Aug. 2, respectively. The staggered hatching reflects the fact that Bliss also laid the eggs on separate days. Not knowing the gender of the babies, Donna named the Aug. 1 hatchling Monday for the day of the week hatching took place. In turn, the second baby, which escaped its shell on Aug. 2, was named Tuesday.

Once hatched, young hummingbirds remain in the nest about 28 days (nearly a month) and depend on their mother to bring them regular meals. If that’s not enough, the ruby-throated hummingbird is known to nest twice in a season. It certainly must rank a female hummingbird as one of the busiest of our summer birds. At the time I wrote this column, Monday and Tuesday had still not left the nest.

The young hummers have grown at an astonishing rate and Donna has witnessed their progress day by day. She noted that young hummers start off life with a short bill. Like the rest of their bodies, however, their bills have grown accordingly as Monday and Tuesday received regular feedings from Bliss.

Photo Courtesy of Donna Ottinger                Having grown at a rapid pace, hummingbird chicks Monday and Tuesday find their nest growing rather cramped by mid-August.

Female hummingbirds receive no assistance from their mates. Males don’t assist with the rearing of their own young. For male hummingbirds, summer is mainly a time to thrive on the abundance of nectar-bearing blooms, as well as a profusion of tiny insects and spiders that also make up a good portion of their diet.

When I saw them, I knew that little Monday and Tuesday would be out of the nest in a short time. It would also be necessary for them to soon begin fall migration. On Aug. 23, Donna reported on her Facebook page that the young hummers had left the nest. 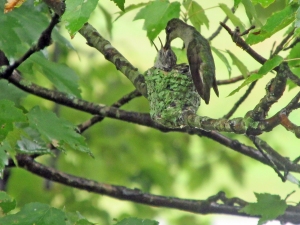 “Just three weeks after hatching, the baby hummers have both left the nest,” she wrote in her post. “They didn’t go far, and Bliss is still feeding them in a nearby tree where they have taken up new residence.”

The next generation of hummingbirds always helps swell the number of these tiny birds in our yards in late summer and early fall. Keeping visiting ruby-throated hummingbirds can be as simple as planting an abundance of the flowers they love, but offering multiple sugar water feeders also helps. Keep the sugar water mix at a four parts water to one part sugar ratio. Don’t offer honey in your feeders. When mixed with water, it can spoil and spread fungal diseases. Remember that hummingbirds don’t subsist on sugar water alone. They also eat numerous tiny insects and spiders to obtain the protein they need for their dietary needs, so don’t use insecticides near feeders or flowers that hummers are likely to visit.

Photo Courtesy of Donna Ottinger  Monday and Tuesday find the nest increasingly crowded in the days before they fledged.

It was absolutely wondrous to observe Bliss and her babies. The experience has motivated me to keep a closer watch on the hummingbirds in my yard. There are female hummers present every summer. They have to be nesting somewhere, and I’d like to find a nest in my own yard. 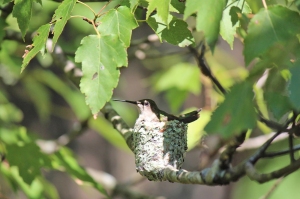 Bliss incubates her eggs at her nest in Bluff City, Tennessee.