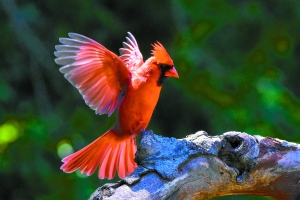 Photo by Jack Bulmer/Pixabay • With sunlight shining on this male Northern cardinal’s wing, the bird looks even more splendid. These beloved birds have been made the official birds for seven U.S. states, a recognition not surpassed by any other North American bird.

Christmas 2021 is almost upon us. If you’ve not finished your holiday shopping, you’d best get moving.

As is my usual custom, I want to share my enthusiasm for the Northern cardinal, one of my favorite birds and a deserving bird to serve as a symbol for the Christmas season.

I have enjoyed watching as cardinals visit my feeders in recent weeks. The beauty of both male and female cardinals is undeniable, but it’s their behavior that’s worth a second look. Nervous, twitchy birds, they are always anxiously surveying their surroundings even as they linger on a feeder long enough to hull a sunflower kernel from its shell. It’s almost as if they know their bright plumage stands out in a drab winter landscape dominated by shades of gray.

One particular male cardinal over the past few months has grown accepting of my close presence. When I stock my feeders with sunflower seed, he barely gives me time to get back to the front porch before he is landing on the feeder to enjoy a meal of seeds. It’s great to see that these beautiful birds can be acclimated to be less timid.

The Northern cardinal, especially the brilliant red male, stands out against a winter backdrop of snow white, deep green or drab gray. Over the years, the cardinal has also become associated with the Christmas season. How many Christmas cards have you received this holiday season with a cardinal featured in the artwork? I’d wager that at least a few cards in any assortment of holiday greetings will feature the likeness of a Northern cardinal. 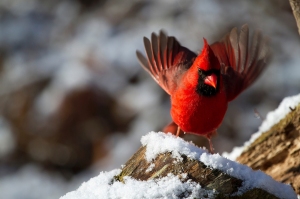 Photo by Skeeze/Pixabay.com • A male Northern cardinal lands on a snowy perch. Cardinals are perfect symbols for the Christmas season with their bright red plumage.

The Northern cardinal belongs to a genus of birds known as Cardinalis in the family Cardinalidae. There are only two other species in this genus, and they range across North America and into northern South America.

The two relatives are the pyrrhuloxia, or Cardinalis sinuatus, of the southwestern United States, and the Vermilion cardinal, or phoeniceus, a bird found in Colombia and Venezuela. Two other South American birds — red-crested cardinal and yellow-billed cardinal — are more closely related to tanagers than to our familiar Northern cardinal. Both the Northern cardinal and red-crested cardinal have been introduced into the state of Hawaii, so two non-native birds from different parts of the globe are now resident in the Aloha State.

The Northern cardinal is a native and abundant bird. Cardinals are a widespread species, ranging westward to the Dakotas and south to the Gulf Coast and Texas. The southeastern United States was once the stronghold of the cardinal population. In the past century, however, cardinals have expanded their range into New England and Canada.

The cardinal accepts a wide variety of food at feeders. Sunflower seed is probably their favorite, but they will also sample safflower seed, cracked corn, peanuts, millet, bakery scraps and even suet. While we may get the idea that cardinals feed largely on seed, that is a misconception based on our observation of the birds at our feeders. Cardinals away from our feeders eat insects and fruit, including the berries of mulberry, holly, pokeberry, elderberry, Russian olive, dogwood and sumac.

The cardinal uses its large beak to efficiently hull sunflower seeds or deal with other foods foraged in field and forest away from our feeders. The large, heavy beak hints at the cardinal’s kinship with birds such as tanagers and grosbeaks. In fact, some of America’s early naturalists referred to the bird as “cardinal grosbeak.” Other common names include the apt “redbird” moniker and “Virginia nightingale.”

Even once the holidays are past, there’s nothing like a glimpse of a Northern cardinal to add some cheer to a bleak winter day. People can also choose to further the cause of science by taking part in studies such as Project FeederWatch, a nationwide survey of bird populations focused on birds coming to feeders maintained by project participants. In the 2015-16 winter season, 1,373 individuals participated in Project FeederWatch in the southeastern United States. The most common birds reported by observers were Northern cardinal, Carolina chickadee, mourning dove, American goldfinch and tufted titmouse. Finishing out the Top 10 feeder birds in this section of the nation were Carolina wren, house finch, blue jay, red-bellied woodpecker and downy woodpecker. Almost 98 percent of participants reported Northern cardinals at their feeders, which means the cardinal has become an almost universal feeder visitor in the southeast.

It’s not surprising that such a popular bird has also become associated with many trappings of the Christmas season.

I can be included among such people. My Christmas decorations include an assortment of cardinal figurines and ornaments. There are other birds — doves and penguins for example — associated with the holiday season, but for me the holidays magnify the importance of one of my favorite birds. The cardinal, in its festive red plumage, appears made to order for a symbol of the holiday season. 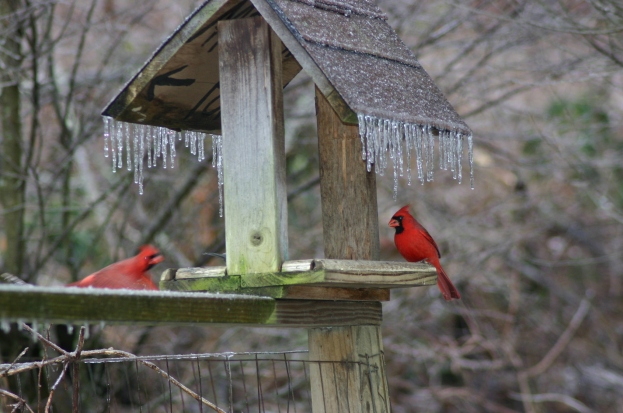 Photo by Bryan Stevens • Northern cardinal seems much less descriptive of this popular bird than such common names as Virginia nightingale and Kentucky redbird.

• Cardinals differ in appearance based on gender. The male boasts crimson plumage, a crest, a black face and orange bill. The female, although less colorful, is also crested. Female cardinals are soft brown in color, with varying degrees of a reddish or rosy tinge in their feathers, particularly in their wings.

• The cardinal’s preference for dense cover makes them likely neighbors for such birds as Carolina wrens, Eastern towhees and brown thrashers.

• The oldest recorded Northern Cardinal was a female, and she was 15 years, nine months old when she was found in Pennsylvania, according to the website, All About Birds.

• An uncommon genetic variation sometimes produces a cardinal with yellow or orange feathers instead of the typical red. The scientific name for the condition that produces yellow cardinals is known as xanthochroism.

• Nests are built by the female cardinal, but her mate delivers food as she incubates her clutch of eggs, which usually numbers three or four. 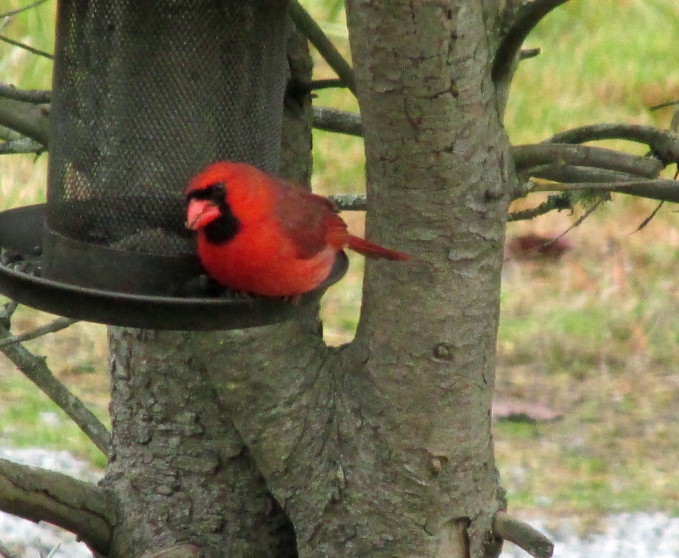