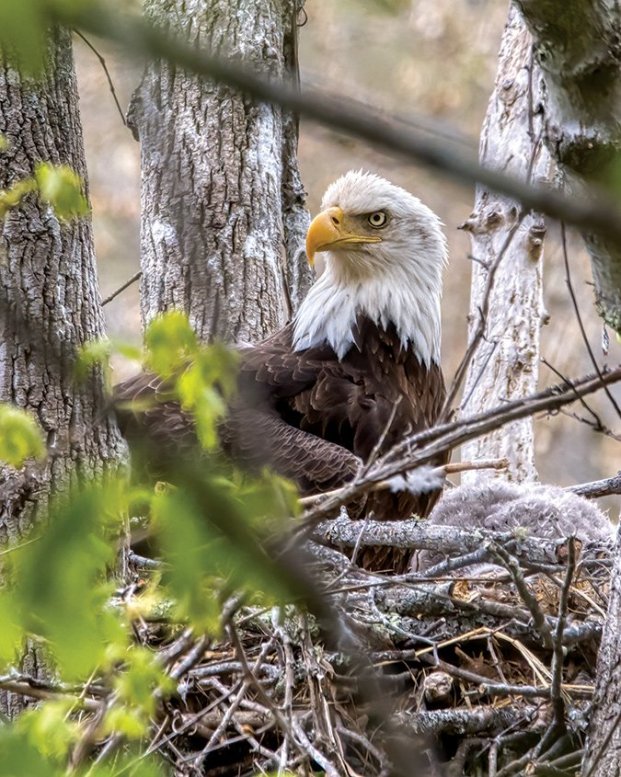 Photo Courtesy of Ryan Rice • Nesting bald eagles becoming a regular occurrence is a dream come true for local resident and photographer Ryan Rice. He has been an enthusiastic fan of bald eagles since childhood.

Ryan Rice loves bald eagles. He’s loved the nation’s official bird since he was a child.

As an adult, he’s channeled that enthusiasm into helping collect valuable data on nesting eagles in the region. Along the way, he’s also managed to capture some impressive photos of bald eagles. Ryan and his photos have even recently been featured in Blue Ridge Country Magazine for his work on bald eagles.

The fact that eagles are nesting again in Northeast Tennessee and the surrounding areas is a dream come true for Rice.

All told, he has located about 10 nests in the Tennessee counties of Carter, Washington, Sullivan, Johnson and Hawkins. He has also found nests in Scott County, Virginia, and in Watauga County, North Carolina.

He has also learned of a nest along the Nolichucky River in Erwin.

“The adult eagles have been seen around the area of the nest pretty regularly,” he said. “I have not personally seen that pair — just the nest.”

From drawing eagles when he was a kid to picking up a camera and getting actual photos of his dream bird, Rice said he has always been interested in bald eagles.

“They were talked about a lot in the ’80s,” Rice said. “About how they were endangered and almost extinct in the lower 48 states. I used to dream of seeing them here in Northeast Tennessee but didn’t think it would ever actually happen.”

He explained that by the early 1960s, the bald eagle was nearly extinct in the continental U.S. The bald eagle had also been almost wiped out in Northeast Tennessee. Rice noted that prior to the 1980s bald eagles had not been seen in the region for decades. Now he is happy to report that the area’s eagle population is flourishing and sightings are becoming commonplace. In Northeast Tennessee, Rice noted, reports of bald eagle sightings on ebird.org date back to 2005. By 2010, the bald eagle population truly rebounded in the region.

Rice said he has conducted a lot of research in an attempt to locate nesting eagles.
“I talked to a lot of people to learn more about their nesting habits,” he said. “I research a lot of eagle sightings people post to ebirds. I use that info to search for nests.
Rice said that getting good photos of eagles isn’t easy. Patience and hard work are key. Even tracking down a nesting site is not a guarantee. He has often gone to a lot of effort to get close enough to photograph the birds only for the eagles to decide to stay away from the nest during his visit.

However, eagles are creatures of habit, according to Rice.

One simple trick he has learned is to always locate their favorite trees for perching. Armed with that knowledge, his photography ventures have become much more successful.

Rice admitted that some nests are simply difficult to reach. Some are accessible only by water, so he said he gets out his kayak and loads up his camera equipment. Other nests are located in trees on steep terrain. On occasion, he must seek permission from landowners in order to observe and photograph a nest on private property.

To get his photos of eagles, he use a Canon 90d camera. “That is a cropped frame DSLR,” he said. He noted that he uses a telephoto lens (Sigma 150-600 mm lens) to get his shots. “On my cropped frame camera that is the equivalent of 960mm on a full frame camera,” Rice said.

Rice and a friend have also formed Above Ground Media, which uses drones for photography for real estate, advertising and special events. He does not use the drones to photograph eagles or their nests. For more information, Rice invites the public to visit http://www.facebook.com/AboveGroundDrones.

His photography remains a hobby for the moment, but he likes to devote all the time he possibly can to it.

“I have gotten into watching and searching out other birds, too,” Rice said. “At the start of COVID I started working from home and I put up bird feeders and started photographing all the different birds that would come to my feeders,” he said. “Then I started going out to bird hot spots to get photos.”

An Eastern screech-owl perches in the entrance to a house Ryan Rice fashioned out of a fallen log.

He also recently built an owl house out of a section of a fallen hollow tree.

“I hung it in a tree in my yard,” he said. “I live in a neighborhood so wasn’t real optimistic I would get any owls. About a month after hanging it, an Eastern screech-owl has appeared to move in.”
Rice said most people built owl houses out of plywood.

“I choose to use an actual section of a tree so that I could get more natural looking photos,” he explained. “The owl has been around for four or five days now. It often spends six to eight hours sitting in the opening of the house.”

He posted some of the photos of the owl house and the screech-owl on social media. “They have gotten a huge response on Facebook,” Rice said.

He recently did a presentation on local bald eagles for the Bristol Bird Club.

“I got a lot of great information from that group on bald eagle nests in the area that I didn’t know about,” Rice said. “That is where I got the information for the Erwin nest. The members of that group have been a huge help. They really appreciated what I was doing in trying to document as many of the local bald eagles as I could.”

Rice said his work is important to help eagles continue to thrive.

As an example, he pointed to a nest he located in the Hunter community of Carter County along the Watauga River.

Rice reached out to local wildlife officials so that a happy accommodation could be reached with the landowners to protect the eagles and their nest.

He noted that logging is not an option at a site of an active nest because of federally protections.

After all, it seems only fitting that the federal government take steps to protect the nation’s official bird and ensure that bald eagles continue to soar for many years to come.\