Photo by Bryan Stevens                             Don’t believe all you hear. Dragonflies and damselflies are harmless to humans. They can’t sting. They can’t sew your lips shut. People have invented many scary names for these winged insects, including “snake killer,” “water witch” and “devil’s darning needle.” Don’t be fooled by the bad press and all the myths. Dragonflies and their kin are some of the world’s most beneficial insects. Pictured, a decorative and illuminating dragonfly owned by a fan of these valuable insects.

I’m taking a hiatus from the birds for one week to bring you some other things with wings in the form of a pictorial essay of dragonflies and damselflies, otherwise known as “odes,” or members of the insect order of Odonata.

I hope you enjoy this diversion. I know I’ve had much fun this spring photographing the odes at the fish pond at my home on Simerly Creek Road in Hampton. I’ve also visited some other locations to find and photograph them, including Erwin Fishery Park in Unicoi County. 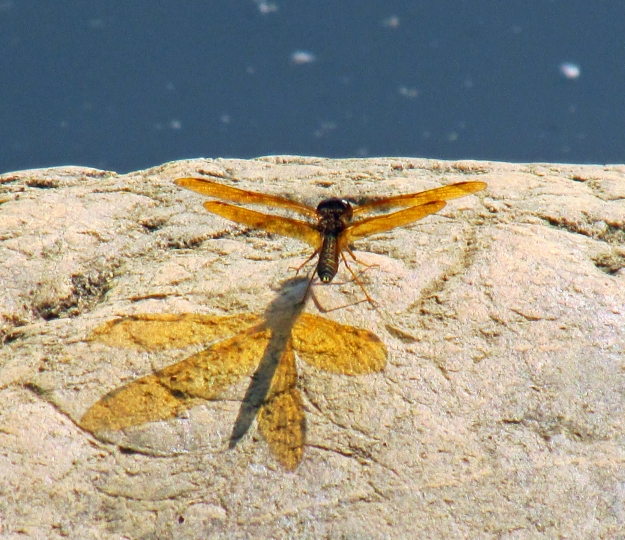 Photo by Bryan Stevens
An Eastern Amberwing casts an amber shadow on this rock at the edge of a pond in Erwin, Tennessee. This is one of the smaller dragonflies in the Southern Appalachians. The largest dragonfly to ever live was Meganeura monyi, which lived during the Carboniferous period about 300 million years ago. It resembled and was related to present-day dragonflies. With a wingspan of almost 26 inches, it is one of the largest known flying insect species. Like modern dragonflies, Meganeura monyi was predatory and fed on other insects.

Photo by Bryan Stevens
The Aurora Damselfly is a study in simple elegance. Damselflies are typically weaker flyers than dragonflies.

Photo by Bryan Stevens
A glimpse through the vegetation at one of the pond’s most voracious predators. Dragonflies consume many other species of insects, including some that are considered pests. Pictured is a female Blue Dasher.

Like birds, some species of dragonflies migrate. They may also form swarms — the equivalent of a flock of birds — as they stage their migratory flights.

For more information on dragonflies in the Volunteer State, please visit http://www.pbase.com/rconnorsnaturephoto/tennessee_odonata to learn more.

2 thoughts on “Other things with wings”