There’s nothing like a wren on a cold, blustery winter’s day to teach a quick lesson in the resilient spirit shared by all our fine feathered friends.

Although not particularly suited to cold temperatures, wrens don’t seem bothered too badly when the mercury sinks in the thermometer. These tiny bundles of feathers move like hyper-active dynamos as they explore tangles of vines or the nooks and crannies of a dark garage as part of their almost constant foraging for food.

Photo by U.S. Fish & Wildlife Service      The Cactus Wren is a specialist of arid habitats in the American Southwest.

At first glance, many people might be tempted to lump wrens together with the sparrows, or “little brown birds.” There are some key differences and, as with sparrows, there are several different species of wrens. Wrens are (almost) an exclusively New World family of birds with the single exception of the bird that Americans refer to as the winter wren. Across Europe, the same bird is known simply as “wren” and is the only member of the family to occur outside of the New World. 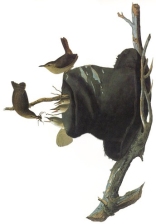 Known by the scientific name of Troglodytes hiemalis, roughly translated as “wintry cave-dweller,” the winter wren is a tiny North American bird and a member of the mainly New World wren family Troglodytidae. The “cave-dwelling” description comes from this bird’s habit of skulking near the ground where it explores nooks, crannies and crevices in search of food.

In our region, the tiny winter wren is most likely to be encountered during the winter months although the species is a nesting bird on some of our higher mountains. Those intending to spend the winter at lower elevations in the region usually arrive in October and depart in early spring.

About the time the winter wren departs, however, a related bird — the house wren — arrives in the region in time for the nesting season. House wrens are native birds, but they often fail to win favor because of their habits of damaging the nests of other cavity-nesting birds such as Eastern bluebirds and Carolina chickadees.

“To a house wren, almost any other nesting bird in its territory threatens competition,” wrote John Eastman in his book, “Birds of Forest, Yard and Thicket.”

Eastman, a wildlife biologist and naturalist, outlined in his chapter on the house wren the territorial nature of the bird. Not only will house wrens puncture the eggs of other birds, they will also kill young birds that are still confined to the nest. Once a pair of house wrens adopts a nesting site, they may remain loyal to it for many years. According to Eastman, these tiny birds display a powerful fidelity to nesting locations from previous seasons.

Photo by U.S. Fish & Wildlife Service   A Marsh Wren delivers insects for hungry young in a nest built in a wetland area.

The male house wren will also build several “dummy” nests in his territory, but these nests must be approved by the female. Once she makes her selection, she will line the nest with softer materials and then lay her six to eight eggs.

For most residents of Southwest Virginia and Northeast Tennessee, the most common wren is the Carolina wren. I’ve had good luck attracting Carolina wrens to my feeders by offering fare such as suet and shelled, unsalted peanuts. This wren will also feed on sunflower seeds if other birds have completed the task of hulling the kernel from inside the shell.

One of my earliest introductions to a nesting bird took place many years ago when I was a boy. A small brown bird had claimed a cloth bag hanging on a hook on the back porch at the home of my grandparents. My grandmother used the bag to hold her clothes-pins. My grandmother had to make some adjustments to her laundry routine while the bird raised a family of young.

I now realize the bird was most likely a Carolina wren. These birds are known to choose some unusual nesting locations, including mailboxes, overturned flower pots and even old boots. A friend of mine shared a story and photos of a Carolina wren that built a nest in her plastic Halloween pumpkin inside a storage shed.

This wren was once considered an almost exclusive southern species, but it has been steadily expanding its range northward for more than a century. The Carolina wren has served as the official state bird of South Carolina since 1948. The wren took the place of the former state bird, the Northern mockingbird. The same state act that elevated the Carolina wren to its official status also made it a misdemeanor to intentionally kill a Carolina wren (or mockingbird) that is punishable with a $100 fine or a 30-day sentence of imprisonment.

The Carolina wren is a handsome bird with a two-tone plumage of warm brown upperparts and buffy underparts. The sexes are identical in appearance, which includes such traits as a visible white eyebrow and a curved bill. Even more than appearance, the song of this wren helps distinguish it from other wrens. I’ve often heard the song translated as “Tea Kettle, Tea Kettle, Tea Kettle.”