The Lee and Lois Herndon Chapter of Tennessee Ornithological Society held its annual Summer Bird Counts in the counties of Carter and Unicoi in June, adding to the data  that exists for regional bird populations during the summer nesting season.

Although its hasn’t been conducted for a long time, the Unicoi County Summer Bird Count established a new record this year with a total of 112 species reported, in contrast to the 110 and 111 species tallied during the first two Summer Counts conducted in 2014 and 2015.
A total of 21 observers in five parties counted birds in Unicoi County on Sunday, June 12, from Flag Pond and Erwin to Unicoi and Limestone Cove, as well as other strategic locations. A total of 20 species of nesting warblers made the count, including Blackburnian, Swainson’s and Magnolia. Other highlights from the count include a single Northern Bobwhite, four Bald Eagles, a Red-shouldered Hawk (a scarce bird in Northeast Tennessee) and three Red Crossbills.
Although I participated in the first two Unicoi County Summer Bird Count, I was in South Carolina at the time of this year’s survey. I hate to miss any count, and I was excited to learn that this year’s survey set a new record for most species to date. 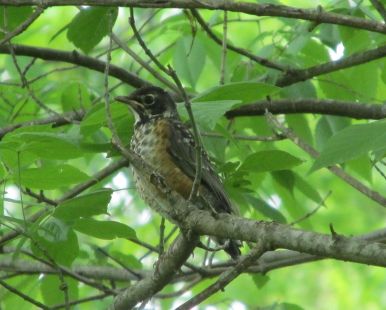 Young American Robins, such as this bird, helped provide sizable numbers for this bird on the Summer Counts.

The American Robin took the prize as the most common bird with 417 robins observed by count participants. The robin was closely followed by European Starling (317); Song Sparrow (186); and Indigo Bunting (129). The 85 Hooded Warblers found on count day made this species the most common warbler on this year’s survey. 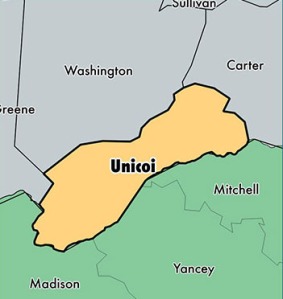 Red Crossbills were found on the Unicoi County Summer Count.

The 23rd annual Summer Bird Count for Carter County was held Saturday, June 18, with 18 observers in seven parties. Strong winds were a problem for most of the day, causing a few missed species and reduced numbers for others. Still, this year’s count managed 108 species, just below the average of 112 for the previous 22 years. The range for this count has varied from 105 species to a high of 121 species. Interesting finds included a Yellow-crowned Night-Heron, a Red-shouldered Hawk, a Eurasian Collared-Dove, a Warbling Vireo, a Brown Creeper and a Hermit Thrush, as well as 18 species of warblers. 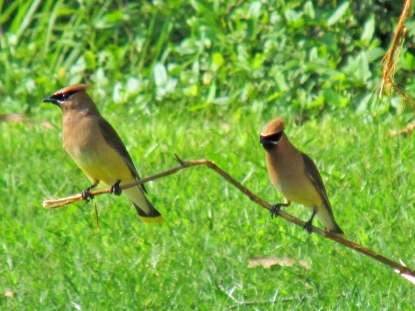 Cedar Waxwings were found on both counts.

House Sparrows were present for both counts.

To learn more about birds and other topics from the natural world, friend me on Facebook at https://www.facebook.com/ahoodedwarbler. He is always posting about local birds, wildlife, flowers, insects and much more. If you have a question, wish to make a comment or share a sighting, email ahoodedwarbler@aol.com.