Although I’ve seen many birds over the years, it’s not often that I’m introduced on a first-name basis with one. So, I’m happy to report that I’ve now made the acquaintance of Rufous, a resident of the woodlands around Flag Pond, a small community in Unicoi County, Tennessee.

Rufous is a ruffed grouse that has been a fascinating and funny neighbor to Leon and Janice Rhodes for the past couple of years. I met Rufous on Saturday, June 25, at the Rhodes family farm. Brayden Paulk, a grandson of the couple, invited me to visit and attempt to meet Rufous.

This particular grouse is apparently a creature of habit, and Brayden suggested that a morning visit might be more conducive to my chances of getting to know Rufous.
I arrived around 9 a.m. and met Brayden and his grandfather. We went to a nearby barn, which apparently serves as a familiar meeting spot for Rufous and those people lucky enough to have gotten to know him over the past couple of years.
Rufous is only one member of a family of ruffed grouse in residence on the Rhodes property. In an email to me, Brayden told me that the mountain farm is a good place to see ruffed grouse. The 17-year-old doesn’t live in Tennessee, but he is a frequent visitor, spending time with his grandparents as often as possible. He and his family live in Oxford, Alabama. He also told me that his grandparents send him every one of my bird columns in the mail. 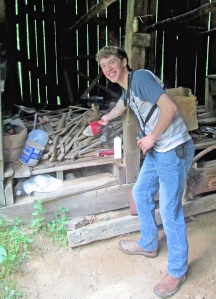 Photo by Bryan Stevens                Inside his grandfather’s barn, Brayden Paulk spends a moment with Rufous, a ruffed grouse with an abundance of charisma.

“I do happen to live in a great place for birds,” he informed me in an email. His home is located close to the Mountain Longleaf National Wildlife Refuge, which Brayden said is known for breeding blue-headed vireos, red-headed woodpeckers, and Swainson’s warblers.
“It has a lot of longleaf [pine] habitat, so I hope soon that red-cockaded woodpeckers might be reintroduced there, and establish a colony,” he added. The red-cockaded woodpecker is classified as an endangered species across much of the southeastern United States.
Brayden is a volunteer working in the Talladega National Forest in the foothills of the Appalachians on a study focused on the effects of controlled burns on cavity-nesting birds, such as red-cockaded woodpeckers.
He is an enthusiastic and, as I learned after meeting him, quite an accomplished birder. Warblers are his favorite family of birds, followed by ducks and sparrows.
“I enjoy where I live because I get to enjoy species such as the black-throated green warbler, blue-headed vireo and even red crossbill in the summer,” he said.
We have also exchanged emails in a discussion about why some of these birds, which are usually found in the boreal forests much farther north, stay much farther south along the spine of the Southern Appalachians.
His future plans are to major in Conservation Biology. “I hope to get a masters in ornithology from Cornell,” Brayden shared.

Of course, during our recent meeting, his focus was on arranging a meeting with Rufous, a bird with “a lot of personality.” Both Brayden and his grandfather cautioned that Rufous doesn’t follow a schedule. In other words, the meeting would take place only if Rufous was so inclined.

Although he has a very tame nature, Rufous is most definitely a wild bird.
Fortunately, I didn’t have to wait too long. Brayden was the first to detect the soft clucks as Rufous made his way cautiously toward the old barn. He emerged from the surrounding woodlands and walked into the barn where I was seated and waiting with Brayden and his grandfather.
Rufous immediately noticed my presence, identifying me as a stranger in the midst of some more familiar friends. He kept a wary eye turned on me during his visit. After a few moments of watching Rufous strut around the barn like he owned it — and perhaps he does in his own mind — I removed my camera from my pocket. I made sure that my actions didn’t alarm Rufous. When he didn’t object, I proceeded to take photos and videos of this very personable ruffed grouse.

One of his favorite activities during these visits is to duel with a red baseball cap worn by Leon Rhodes. Whenever Brayden’s grandfather removed the cap and waved it in front of Rufous, the grouse became very focused. He channeled his attention almost exclusively on the cap until, with a startlingly swift attack. The entire sequence reminded me of a bull attacking a matador’s red cape.
For probably a half hour, Rufous put on quite a show, and I think Brayden and his grandfather were thrilled that the grouse proved so cooperative during my visit.

After my visit with Rufous, I took Brayden for a brief birding trip to Rock Creek Recreation Area near Erwin, Tennessee. I was hopeful we might get to see a black-throated blue warbler, which has been an elusive warbler for Brayden. We did get some good birds at Rock Creek, including hooded warbler, Northern parula, blue-headed vireo, red-eyed vireo, black-throated green warbler and blue-gray gnatcatcher.
We didn’t, however, find a black-throated blue warbler. We didn’t give up, though, and proceeded to the Cherokee National Forest on Unaka Mountain. We made one very productive stop, finding a singing veery, a scarlet tanager and a dark-eyed junco. We also found more warblers, including black-and-white warbler, worm-eating warbler and black-throated green warbler. I’m happy to report we also found a male black-throated blue warbler. So, the productive morning resulted in my meeting with a grouse with a lot of personality and Brayden getting a new species for his life list of birds.
I don’t have any theory to explain Rufous and his acceptance of his human neighbors. I do believe birds, like humans, are individuals. Some of them have quirks that set them apart from others. Although he acts tame, Rufous is still a wild bird. Most ruffed grouse are extremely wary birds that go out of their way to avoid humans. Meeting a grouse that took humans in stride was a fascinating experience. 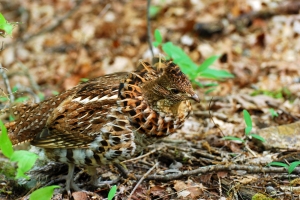 The ruffed grouse is named for the male’s neck ruff. These feathers around the neck can be erected in mating displays, creating an impressive “collar.”  The ruffed grouse has served since 1931 as the state bird of Pennsylvania.

Many years ago, a ruffed grouse boldly walked into my front yard and then ventured onto the front porch. Only my timely intervention rescued the visiting grouse from a cat that belonged to my parents.
The unusual behavior of Rufous has persisted for two years. That, in my book, makes him a very unique grouse. I’ll always remember the day that I made his acquaintance. 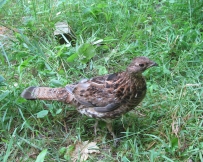 Photo by Bryan Stevens       Rufous proved to be a grouse with a unique personality.