Photo by Bryan Stevens • A female hooded merganser flaps her wings as another preens her feathers behind her.

Now that the warblers, hummingbirds and other birds of summer have, for the most part, departed, new arrivals have filtered into the region to take their place and prevent the winter months from seeming too bleak.

At my own home, these new arrivals have included a field sparrow — the first I’ve seen at home in several years — and a swamp sparrow. I’ve not caught sight of white-throated sparrows or dark-eyed juncos so far, but these hardy sparrows often don’t arrive until the first incidents of truly snowy weather. However, Helen Whited of Richlands, Virginia, emailed me to let me know that she saw her first dark-eyed junco of the season on Monday, Nov. 5.

Different species of waterfowl have also returned to some familiar haunts, and I’m grateful to readers who have kept me informed about some of these arrivals. Joanne Campbell of Bristol, Tennessee, posted on my Facebook page that hooded mergansers have returned to Middlebrook Lake near her home on Saturday, Nov. 3. The hooded merganser, Joanne noted, is one of her favorite birds. Brookie and Jean Potter of Elizabethton, Tennessee, reported that four male buffleheads returned to Wilbur Lake near their home on Oct. 27.

Middlebrook Lake has served as a winter home for hooded mergansers since 1987, while buffleheads have congregated on Wilbur Lake for decades. Another good location to look for buffleheads during the winter months is in the weir below South Holston Dam around the Osceola Island Recreation Area. Several hundred of these ducks have been reported in past winters at these various locations.

Although classified as sea ducks, the mergansers are more at home in river habitats. There are six closely related species in three genera: Mergus, Mergellus and Lophodytes. The latter two genera have only a single species each: the hooded merganser (Lophodytes cucullatus) and the smew (Mergellus albellus).

The typical mergansers are fish-eating waterfowl in the genus known as Mergus. The hooded merganser’s genus name of Lophodytes is derived from Greek and, roughly translated, means “crested diver.” Both male and female hooded mergansers have crests capable of being raised or lowered. Females are mostly brown, but males have a striking plumage in a pattern of brown, white and black.

Photo by Photo by Tim McCabe/U.S. Fish & Wildlife Service • The male hooded merganser stands out among ducks with his black, white, and brown plumage.

Everyone has probably heard the phrase “as scarce as hen’s teeth.” It means almost exactly what you think. Birds don’t have teeth, so it’s a way to describe something exceptionally rare. It’s a characteristic that sets birds apart from other creatures, such as mammals.

There are some birds, however, that come closer to having teeth than their other beaked counterparts. Mergansers would definitely fall into that category. The mergansers are a type of duck known collectively as “sawbills,” a reference to their long, thin bills with serrated edges that help them grip prey. The “sawbills” come closer than any of our other birds in having teeth, although not in the same sense as mammals have teeth.

Photo by Alexas-fotos/Pixabay.com • This closeup of a female common merganser shows in detail the serrated bill, which assists this duck in seizing and grasping the fish that makes up a good portion of the bird’s diet.

The other mergansers in the Mergus genus consist of four species: common merganser, Brazilian merganser, red-breasted Merganser and scaly-sided Merganser. The last of these is an endangered species with only about 5,000 birds in the worldwide population. These remaining scaly-sided mergansers are found in the border regions of China, North Korea and Russia.

While today’s birds, even mergansers, all lack teeth, that hasn’t always been the case. About 80 million years ago, a bird known as Hesperornis (“western bird”) swam the inland seas that stretched over areas from Kansas to Canada. They swam through those ancient seas because they could not fly. 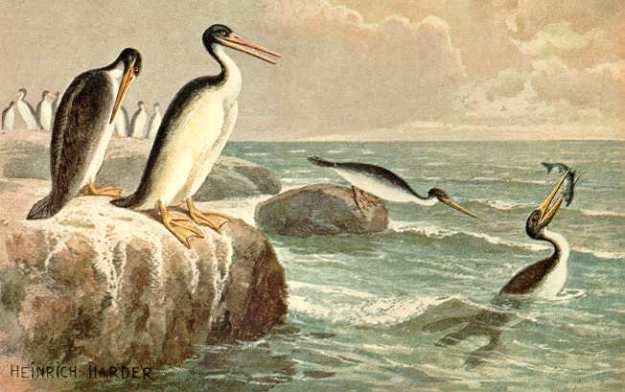 This early 20th century illustration of Hesperornis is no longer considered scientifically accurate by scientists, but it does demonstrate one striking feature – the toothed jaws of this ancient bird.

Hooded mergansers are content to seek smaller fish. According to the website for the Ducks Unlimited organization, the hooded merganser is the smallest of the three North American mergansers. In addition to fish, hooded mergansers feed on crayfish and other crustaceans, as well as aquatic insects.

The hooded merganser prefers forested wetlands. As a cavity-nesting bird, it seeks out natural cavities in trees for nesting, although it will also accept nest boxes provided by human landlords. This duck breeds from as far north as Alaska and Canada and as far south as Louisiana and Georgia.

Photo by Bryan Stevens • Hooded merganser females, or hens, have a gray-brown head and neck with a reddish-brown crest, which marks quite a contrast from the male’s appearance.

Late fall and winter are good times to see ducks in the region. Some will spend a good portion of the winter season on area lakes, rivers and ponds, while others will make only brief stops during their migration to their preferred wintering grounds. Some of the other ducks that are usually somewhat common in the region in winter include ring-necked duck and American wigeon. If you live or work near a body of water, stay alert for the comings and goings of waterfowl as winter approaches. You may be afforded an opportunity to see a hooded merganser or bufflehead for yourself. 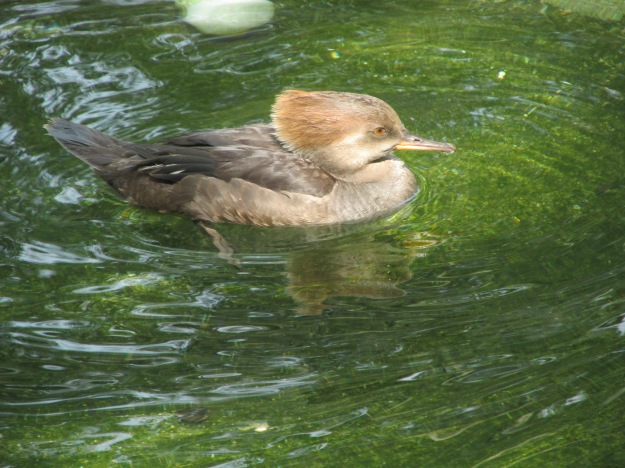 The Lee & Lois Herndon Chapter of Tennessee Ornithological Society produces an annual calendar featuring some exceptional bird photography from its members. This 2019 calendar will feature full-color photographs of some of the region’s most colorful and engaging birds. The club sells the calendars for $15 each. All proceeds are used to support birding opportunities and bird-related causes here in Northeast Tennessee. For instance, the club pays for bird seed to stock the feeders at Sycamore Shoals State Historic Park in Elizabethton, Tennessee. The club also regularly supports causes that benefit birds.

The calendar also features an informative calendar grid with highlights for major holidays, as well as important bird-related dates. The calendar’s pages feature more than 80 full-color photographs of area birds, including common favorites and some not-so-common visitors. The front cover features a dazzling photograph of a gorgeous male rose-breasted grosbeak. If you’re interested in obtaining a calendar, contact ahoodedwarbler@aol.com by email or send a message via Facebook at http://www.facebook.com/ahoodedwarbler. Calendars can be mailed to any destination in the United States for an additional charge of $2 for shipping and postage.