Eastern bluebirds returned to my home much earlier than usual this year, which I hope is a good sign. The presence of a pair of these beautiful and trusting birds is always sure to put people in a good mood. Is it any wonder that bluebirds are widely considered harbingers of happiness?

Many Native American tribes, including the Navajo and Cochiti, paid special reverence to bluebirds. Russian folklore and Chinese mythology also offer interest tales about “blue birds,” but those are not species closely related to any of North America’s three species of native bluebirds.

People have known for generations that bluebirds make good neighbors. A pair of bluebirds in your yard or garden provides hour upon hour of free entertainment as one watches these birds go about their daily routine. At this time of the year, much of that routine is focused on finding and claiming the best possible nesting location for the upcoming spring season. 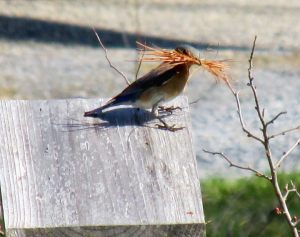 Photo by Bryan Stevens • A female Eastern Bluebird gathers pine needles to use as nesting material.

Woodpeckers and nuthatches can excavate their own cavity in a dead or decaying tree. Others, such as the bluebirds, must find a cavity already in existence. Such cavities are scarce real estate and can be subject to some intense competition. The Eastern bluebird is at a disadvantage when forced to compete with non-native introduced birds such as aggressive European starlings and house sparrows. Even native competitors such as house wrens and tree swallows are serious rivals when it comes down to staking a claim to prime nesting real estate. 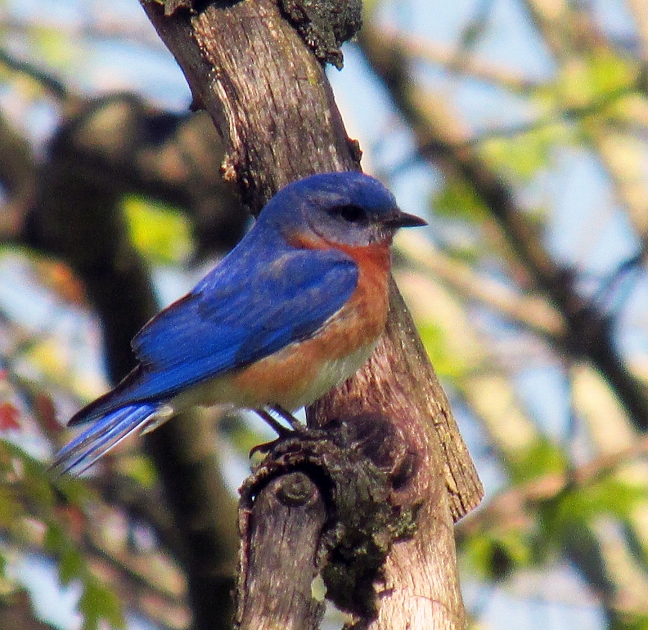 Photo by Bryan Stevens • The male Eastern Bluebird is beloved by many bird enthusiasts.

Over the years, I have found bluebirds nesting in cavities inside wooden fence posts, but there are fewer wooden fence posts every year. This reinforces the idea of how changing landscapes have affected these birds. Instead of wooden fence posts, many farmers now use metal ones, and dead or dying trees — a much sought-after resource for cavity-nesting birds — are often removed from woodlands.

Fortunately for bluebirds, this species will also accept lodging in a nest box, or birdhouse, provided for them by human landlords. One of the simplest ways to bring bluebirds close is to offer wooden boxes, constructed to their specific requirements, for their use as nesting locations.

Because of their trusting nature when it comes to their human neighbors, the Eastern bluebird is one of our most beloved birds. In fact, bluebirds are such popular birds that interest in them and their well-being has inspired the foundation of organizations such as the North American Bluebird Society. The Eastern bluebird has also been designated the official state bird for New York and Missouri, which provides more testimony to the immense popularity of this bird.

So, where exactly did the phrase “bluebird of happiness” originate? As it turns out, the phrase became popularized with the American public thanks to a musical and a pop song. Maurice Maeterlinck in 1908 published a symbolist stage play named “The Blue Bird.” Translated into English by Alexander Teixeira de Mattos, it played on Broadway from 1910. The play was eventually adapted into a children’s novel, an opera and at least seven films between 1910 and 2002.

In 1934, the endurance of the phrase received reinforcement, thanks to the popular American song “Bluebird of Happiness,” which was written by Sandor Harmati and Edward Heyman. The song was recorded several times by American tenor Jan Peerce, as well as by Art Mooney and His Orchestra. 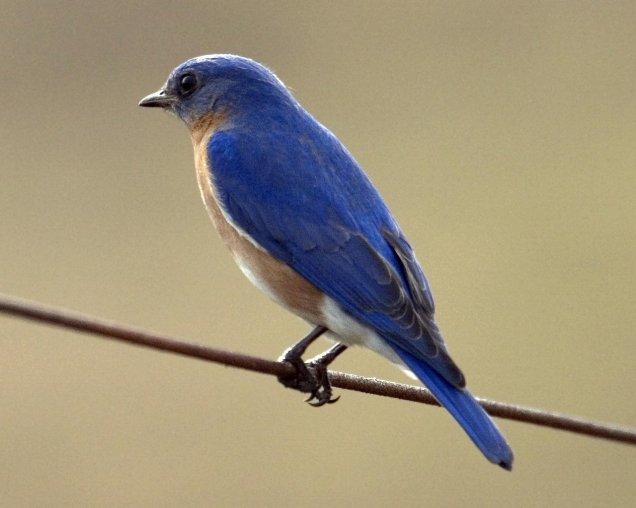 Photo by skeeze/Pixabay.com • Eastern bluebirds are already scouring the countryside for suitable nesting cavities. Consider adding a nesting box to your yard or garden to attract these beautiful tenants for the nesting season.