Photo Courtesy of Barbara Lake • A Northern flicker forages for insects on a lawn.

Barbara Lake sent me an email and several attached photos recently asking for help with a new bird she had noticed in her yard.

“Can you identify this bird?” Barbara wrote. “He was pecking at the ground like a woodpecker might do if the yard was a tree. I’ve never seen it before.
She added that she saw two of the birds. “They aerated the yard nicely,” she noted.

Barbara’s instincts were correct. The bird was a woodpecker. Most of the region’s woodpeckers are black and white birds. The Northern flicker, on the other hand, shows considerable color— for a woodpecker. Barbara’s two visitors were flickers.

While flickers can be found during all seasons in the region, this woodpecker is one of the migratory ones. I see the most Northern flickers during fall migration. This woodpecker is one of the few of its kind that migrates to warmer climates during the colder months, although the species is usually not absent from the region in the winter season.

Photo by Barbara Lake • Northern flickers, such as this individual, spent a lot of time foraging on the ground for insect prey.

As mentioned earlier, this is a woodpecker with many other common names, including yellow-hammer — a popular name in the Deep South — and harry-wicket, heigh-ho and gawker bird. The Northern flicker is also the only woodpecker to serve a state — Alabama — as an official bird. The flicker earned this distinction back in 1927. Soldiers from Alabama who fought for the Confederacy were nicknamed “yellowhammers” because of their grey-and-yellow uniforms, which matched the colors of the bird. Incidentally, Alabama was one of the first states to ever name an official state bird.

The Northern flicker — both the yellow- and red-shafted races — is not the only flicker in the United States. The gilded flicker inhabits many of the deserts — Sonoran, Yuma and Colorado — in the United States. Of course, trees are scarce in deserts, but that hasn’t proven an obstacle for this woodpecker. The bird is closely associated with saguaro cactus. Other desert dwellers depend on this woodpecker. Once the flickers are no longer making use of their nest and roost holes in the multi-armed cacti, other wildlife moved into the chambers.

Photo by U.S. Fish and Wildlife Service • Northern flickers create nesting cavities that will in subsequent years be used by other cavity-nesting birds.

The Northern flicker is an enthusiastic drummer, pounding loudly on the sides of trees with its stout bill. The purpose of the drumming is to communicate with mates and signal potential rivals that they’re intruding. Toward that objective, flickers sometimes substitute metal utility poles or the sides of buildings for the trunks of trees. In addition to drumming, the flicker also employs a variety of loud vocalizations that are fairly distinctive. A loud, repeated flicker, often translated as “wicka-wicka-wicka,” is similar to the cluck-like call of the larger pileated woodpecker. The flicker is also known for emitting a sharp, loud “kleeer” call can be heard from a considerable distance. Flickers are probably most vocal during the spring months.

If you search for flickers, however, don’t concentrate all your scanning on tree trunks. These woodpeckers spend a lot of time in field or on lawns in search of insect prey, which mostly consists of ants and beetles. Barbara’s observation gave her a glimpse into the usual behavior of these unusual woodpeckers. Flickers also eat seeds and fruit, and these woodpeckers will also visit feeders for peanuts, sunflower seed and suet. 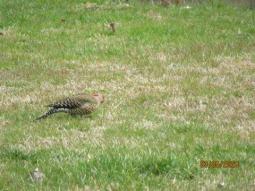 Photo Courtesy of Barbara Lake • A Northern flicker hunts beetles, ants, and other insects in a grassy lawn.

The adult flicker is a brown bird with black bars on the back and wings. A distinctive black patch occupies the upper breast, while the lower breast and belly are beige with black spots. Males can be identified by a black or red mustache stripe at the base of the beak. They also have a red stripe on the back of their gray heads. The flicker’s dark tail is set apart from a white rump patch that is conspicuous when the bird takes flight.

The Northern flicker, as either the red- or yellow-shafted reach, ranges across the United States and Canada. The flicker also ranges to Central America, Cuba and the Cayman Islands. Known scientifically as Colaptes auratus, which can be roughly translated as the “golden woodpecker,” there are about a dozen species of flickers in North, Central and South America, as well as the Caribbean.

A couple members of the flicker clan are now extinct. The human introduction of cats and goats to Guadalupe Island, offshore from the western coast of Baja California, Mexico, led to the extinction of this woodpecker in 1906. The Bermuda flicker apparently died out centuries ago, although a few may have lingered into the 17th century. John Smith, the early explorer associated with the Jamestown colony of Virginia, may have written of the Bermuda flicker in a journal recording his voyages. English-born John Abbot explored southeastern Georgia, collecting specimens and painting birds such as this Northern flicker during the Revolutionary era in Colonial America.

Look for Northern flickers in fields, orchards, city parks and well-planted suburban yards. These woodpeckers are usually not too shy around human observers and will sometimes allow for extended observation. If you’re even more fortunate, you could find one visiting your feeders. 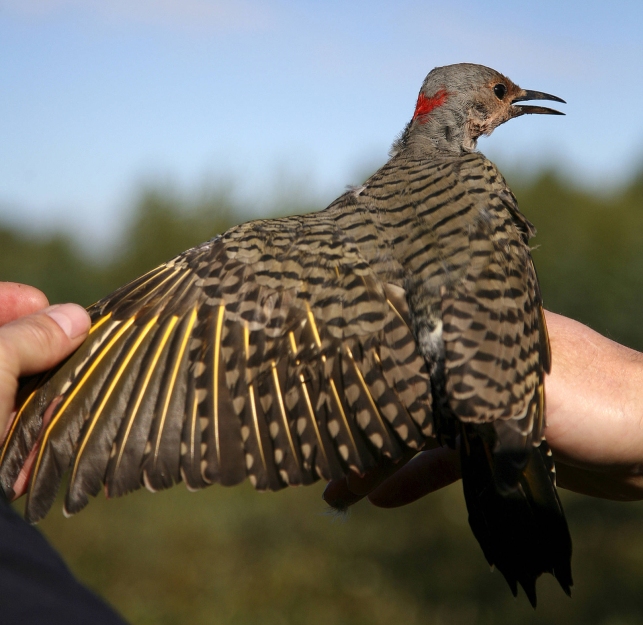 Photo by U.S. Fish and Wildlife Service • Flickers come in two varieties. The yellow-shafted race, shown here, is found primarily in the Eastern United States. In western states, the red-shafted variety replaces its eastern counterpart. In this photo, a researcher demonstrates the yellow feather shafts in an individual’s wing.

2 thoughts on “Mystery birds turn out to be Northern flickers”