Among my birding friends, it’s no secret the warblers are among my favorite birds. I impatiently await the start of fall migration each year knowing that it holds the potential of bringing about two dozen warbler species to my yard. The trickle of fall migrants has already started with the arrival of juvenile Chestnut-sided Warblers and American Redstarts to my yard on Aug. 19.

Photo by U.S Fish and Wildlife Service
A Kentucky Warbler brings food to young in a nest.

The wood-warblers, the more clinical name for this group of birds, consist of 116 species exclusive to the New World. About half of the species collectively make their home in North America for at least a few months out of the year. The others range throughout the Caribbean, as well as Central and South America. Most of them are noted for leading frantic, fast-paced lives that are far from sedentary. For this reason, they can be extremely challenging to observe with a pair of binoculars. 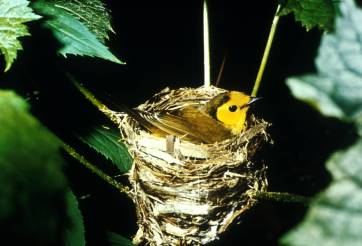 Photo by U.S. Fish and Wildlife Service A female Hooded Warbler sits tight on her nest.

The Chestnut-sided Warbler and American Redstart nest at various locations in Southwest Virginia and Northeastern Tennessee, but they are not usually present during the summer months. I do host a few species of warblers that nest in the woodlands around my home. These include Hooded Warbler, Northern Parula, Black-throated Green Warbler, Black-and-white Warbler and Ovenbird. 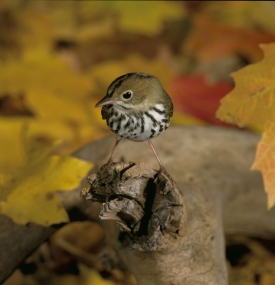 Photo by U.S. Fish and Wildlife Service Although usually silent in the fall, Ovebirds have a distinctive, ringing song they sing constantly in the spring.

One of the last warblers to arrive at my home this spring was the enigmatic Ovenbird. With its loud, ringing song — “Teacher! Teacher! Teacher!” — it’s impossible not to notice the arrival of this warbler. So, even after the other summer warblers had already been present for a couple of weeks, I finally heard the song of an Ovenbird ringing from the woods.

Why do I describe this warbler as enigmatic? For starters, Ovenbirds do not easily permit even stealthy birders to glimpse them. I have gotten good looks at Ovenbirds throughout the years, but they are still difficult to observe. They are one of the warblers more easily heard than seen. When they are observed, it’s usually no more than a fleeting look before the bird dives back into heavy cover.

The Ovenbird is not one of the brightly colored warblers, such as Blackburnian Warbler or Yellow Warbler. The Ovenbird is a small brown bird with a white breast with dark streaking — an appearance that bears a superficial resemblance to the larger thrushes that share the same woodland habitat. The only hint of color is an orange crown bordered by dark stripes atop the bird’s head. Even this orange crown patch is not easily seen. When agitated, an Ovenbird may raise its head feathers, which makes this orange mark easier to detect. The Ovenbird also has a distinct white ring around its eyes. They also have pink legs and a pinkish bill.

The Ovenbird, unlike many warblers, is not named for its appearance. Instead, the bird’s name derives from the shape of the nest it builds. The nest is a domed structure placed on the ground, woven from vegetation and containing a side entrance. Early European settlers in North America thought the nest looked like a Dutch oven, hence the name “ovenbird” for the small warbler with the intricate nest.

Rather than hopping along the length of a branch or limb, an Ovenbird walks in a deliberate fashion. This bird feeds on insects, spiders and other small prey items foraged from the woodland floor. On rare occasions, a lingering Ovenbird shows up at feeders during the winter months.

Ovenbirds spend the summer nesting season in mature deciduous and mixed forests across Canada and the eastern United States. Ovenbirds migrate each fall to the southeastern United States, the West Indies, and from Mexico to northern South America for the winter season.

Photo Courtesy of Jean Potter A Magnolia Warbler perched on an evergreen bough.

The arrival of September brought even more warblers to my yard as they make brief visits during their fall migration. I had better luck with lawn chair birding while saying goodbye to August than I did welcoming September. On this first day of September that was also Labor Day, I saw a single Common Nighthawk, as opposed to last night’s flock of 50. I only saw one warbler, but it was a Chestnut-sided Warbler and different than the species I saw last night. Other birds that I observed including several Gray Catbirds and Blue-gray Gnatcatchers, Eastern Wood-Pewee, Brown Thrasher and family flocks of American Goldfinches and House Finches. Earlier that same day, I watched and listened as a Common Raven flew overhead. The Ruby-throated Hummingbirds are also still numerous.

Photo by Bryan Stevens A migrating Northern Parula forages for insects in the branches of a Blue Spruce.

My lawn chair birding on Sept. 3 was brief but interesting. One new warbler, a male Canada Warbler, showed up, as well as two Northern Parulas that spent all their time chasing each other through the holly and the willow trees. I also got a fleeting glimpse of a Magnolia Warbler. In the sky overhead, a single Chimney Swift glided through the air with a trio of Common Nighthawks.

The cast of migrants changes almost daily. I enjoyed a good evening of lawn chair birding on Sept. 5, adding a few new warblers for the fall to my list. Only saw four species, but two of them — immature Black-and-White Warbler and Black-throated Green Warbler — were new for the fall. I also saw Chestnut-sided Warbler and Northern Parula. A sizable flock of at least 50 Common Nighthawks passed overhead. Other sightings included Eastern Phoebe, Brown Thrasher, Gray Catbirds, Wood Thrush, Pileated Woodpecker, Red-eyed Vireo and Ruby-throated Hummingbirds. All the resident feeder birds have enjoyed a good nesting seasons with numbers of Song Sparrows in the yard are showing an increase. 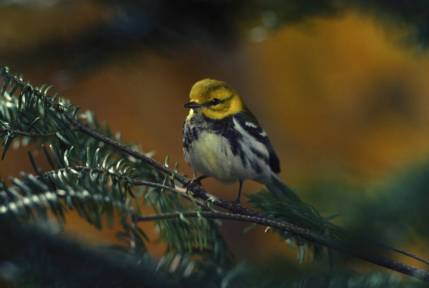 Photo by U.S. Fish and Wildlife Service A female Black-throated Green Warbler perches in a conifer.

I was surprised On Sept. 6 with an observation of a Cape May Warbler (a young male) feeding low in vegetation in the swampy area of the backyard. It might seem odd to find a Cape May feeding so low to the ground, but it was at the base of a large Norway Spruce. This was a new warbler for the fall migration season. That same day, I observed two Magnolia Warblers and a Northern Parula. In the evening, small flocks of Chimney Swifts and Common Nighthawks flew over my home.

So, the first week in September has seen fall migration off to a good start. I love to hear  what others are seeing as the fall season advances. Email me at ahoodedwarbler@aol.com or comment here at my blog.