Jane Arnold, a resident of Bristol, Tennessee, emailed me to ask a question about hummingbird numbers this spring.

In her email, Jane wrote, “My mom (Betty Poole of Bristol, Virginia) asked me to email you and ask if you have received any emails from fellow hummer enthusiasts about the number of hummers they are seeing this year.”

Jane went on to explain that her aunt, Alyce Pennington, Montcalm, West Virginia, and her cousin, Hal Pennington, Huntsville, Alabama, have also reported not seeing many of these tiny birds this spring. “When they arrived in April, they would see them off and on all day long,” Jane wrote. “But the last couple of weeks their presence has dropped off quite a bit.

In addition to Jane’s email, I also received a similar question in an email from Garland Depew of Bluff Hollow, Virginia.

“I’d like your opinion on my hummingbirds,” Garland wrote. “They always show up in mid April, and by this time (early June) I usually have a dozen or so fighting for the feeders. It’s been that way for years.”

Garland noted that this year he had about eight hummingbirds show up by late April. “Then all of a sudden in the middle of May they just vanished,” he added. “I have just one or two now.”

In the past Garland said that he had “literally a cloud of birds at the feeders” and that ’it’s hard to get an accurate count, but last year we had about 18 hummers, and similar numbers in the years before that.”

He noted that he has been using feeders to attract hummers for at least 10 years.

Garland also checked with a neighbor who lives about a quarter mile down the road from his home regarding the number of hummingbirds at their feeders. She informed him that she has seen six or seven hummingbirds, whereas she estimated she had as many as 20 last year.

“I can’t think of anything I might have done to cause this,” he said. “Any ideas?”

It’s unfortunate, but it is a fairly common and disappointing aspect of hummingbird lives that their numbers tend to decline after they burst back on the scene every April. Some of those spring ruby-throated hummingbirds in April are migrants that are going to keep pushing farther north. They stick around for a while at a place they like but will eventually keep moving on, which is why numbers stay fairly consistent in late April and early May.

In late May, however, those hummingbirds intending to spend the summer north of us have departed the region. We are left with the hummers that have liked our yards and gardens enough to stick around with us for the entire summer. It’s also true that numbers of hummingbirds in any one specific area will fluctuate from year to year. It’s just possible that, for a reason that may be nothing greater than a garden planted with their favorite flowers, hummingbirds have shifted where they live for a season.

I experienced similar aspects of this situation myself this spring. I had probably a dozen hummingbirds at my feeders in late April, but throughout May their numbers dwindled. We have arrived in June, and I probably have two or three males and possibly one or two females. That means that the two females are probably nesting nearby. It’s also a fact that local numbers of birds fluctuate from year to year. Attracting them one year is not a guarantee they will return every subsequent year.

By May, the spring hummingbird migration is basically finished for the region. A few of the female hummingbirds, finding our yards to their liking, will conclude their epic journey here and spend the next few months tending to a new generation of hummers. Female ruby-throated hummingbirds lay two eggs. There are some reasons why it’s always a pair of eggs. First, the nest is so small that there is barely room for two eggs, let alone more. Second, once the young hatch, the nest has just enough room to accommodate them as they grow, fed well by their mother. Third, feeding two hungry young hummingbirds is a demanding task. A female hummingbird has to find enough food to fuel her own body and help her young in the nest grow and thrive. It’s a full-time job during the daylight hours. She’s hard-pressed to succeed at raising two young. Attempting to rear more would most likely prove impossible.

The entire process — from building the nest to incubating eggs to tending hatchlings — requires a commitment of more than two months. The female hummingbird builds her exquisite nest from lichen and various plant fibers, much of it held together by collected spider silk. Once that time-consuming task is completed, the female hummingbird lays her eggs. She will spend about the next 18 days incubating them. Once they hatch, the young will remain in the nest about 28 days (nearly a month) and depend on their mother to bring them regular meals. If that’s not enough, the ruby-throated hummingbird is known to nest twice in a season. It certainly must rank a female hummingbird as one of the busiest of our summer birds.

Of course, a few adult males will also put an end to their migration once they reach the region. The males, however, don’t assist with the rearing of their own young. For male hummingbirds, summer is mainly a time to thrive on the abundance of nectar-bearing blooms, as well as a profusion of tiny insects and spiders that also make up a good portion of their diet.

The good news is that hummingbird numbers will increase later this summer and in early fall. All those hummers that went farther north will migrate back through, and in the autumn they will be traveling with their kids. Be sure to keep feeders available when we hit August to offer places for hummers to rest and refuel as they migrate through again. 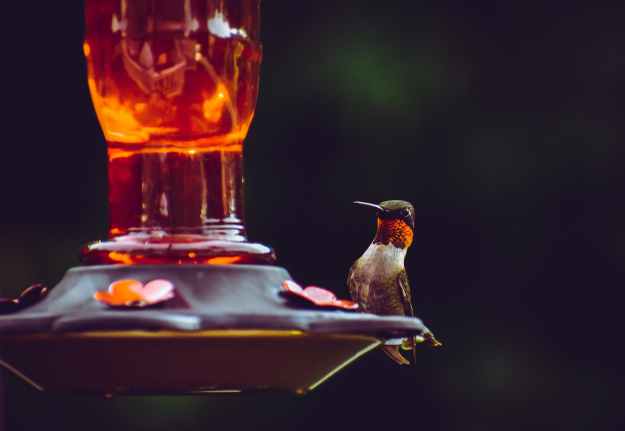 Photo by Chris F on Pexels.com

Only a single species — ruby-throated hummingbird — nests in the eastern United States, while several species nest in the western half of the nation, especially in the American southwest. Worldwide, the 300 some species of hummingbirds have been giving some incredibly descriptive names such as Andean blossomcrown, black inca, blue-chested hummingbird, buffy helmetcrest, bumblebee hummingbird, charming hummingbird, coppery emerald, gorgeted sunangel, great sapphirewing, green-breasted mountaingem, lesser violetear, long-tailed woodnymph, purple-bibbed whitetip, saw-billed hermit, spangled coquette and white-throated hummingbird. This sampling of the dazzling variety of names for these tiny birds is indicative of their long-standing popularity with people.

As I have done in years past, I advise a patient but proactive approach for attracting hummingbirds. Keep feeders readily available. Don’t add red dyes to your sugar water mixture, which is perfectly acceptable at a ratio of four parts water to one part sugar. If possible, offer flowers in addition to feeders. Don’t keep your landscape too tidy. A perfectly manicured lawn is like a desert for hummingbirds. Provide some shrubs and trees to provide cover and perching branches. Water features, particularly waterfalls and fountains, are also a reliable means of attracting hummingbirds, as well as other birds. These tips also help attract other sorts of birds, as well, so it’s a win-win situation for bird enthusiasts.

Photo by Bryan Stevens • A ruby-throated hummingbird perches on a feeder.