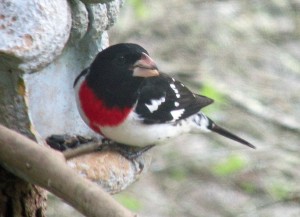 Photo by Bryan Stevens
A Rose-breasted Grosbeak finds a meal of sunflower seeds at a feeder.

There are so many birds arriving in the past week that one almost needs to take a breath from all the excitement and simply enjoy the beauty, both showy and subtle, that many of our returning feathered friends can provide.

The rose-breasted grosbeak is definitely one of the birds in the showy category. I haven’t seen one yet, but many readers have contacted me to let me know of their sightings.
•••
April Kerns Fain in Unicoi shared a photo and post on April 19 on my Facebook page about the arrival of her first rose-breasted grosbeak.
“Our grosbeak is back,” she wrote. Her photo showed the beautiful bird perched on a feeder stocked with plenty of sunflower seeds and suet.
•••
“We had two pairs show up a couple of days ago,” Karen Fouts, a resident of Marion, Virginia, commented on my Facebook page. “Aren’t they lovely?”
•••
Nancy Barrigar of Elizabethton posted that she and her husband, Gary, saw them on Roan Mountain the weekend of April 29-30. “Still waiting to see them at our feeders,” she added.
•••
Barbara Lake of Hampton also shared her rose-breasted grosbeak sighting. “We had them on the weekend,” she said. “Seem to be down to just two now.”
••• 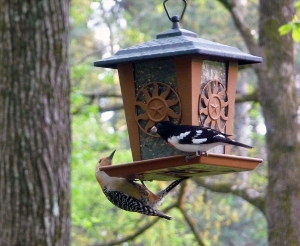 Carolyn Dover Norman in Glen Rose, Texas, shared her story of a brief sighting.
“I had one passing through here in Texas last week — just for a day,” she wrote on my Facebook page.
•••
Gloria Walton Blevins in Damascus, Virginia, happily shared that she “saw one yesterday” on my Facebook page on April 29.
•••
Carolyn Baker Martin in Carter County reported that her grosbeak sighting involved a female rather than the more eyecatching male. “Had a female at our feeders two mornings,” she wrote.
•••
Felicia Mitchell in Washington County, Virginia, has enjoyed grosbeak sightings this spring.
“Female grosbeak showed up just this minute at front platform feeder,” Felicia wrote on April 29. “Likely a pair soon. And maybe a family one day.”
She later updated her comment to announce that a male grosbeak had arrived, along with the female.
•••
Philip Laws notified me that he saw a male and some female rose-breasted grosbeaks May 4 at his home in Limestone Cove.
•••
A few readers, like myself, are still awaiting that first spring rose-breasted grosbeak.
“I’m still looking for my first one,” wrote James Noel Smith in Unicoi.
•••
Priscilla Gutierrez in Roan Mountain noted that she’s still waiting for the grosbeaks to show up. “So beautiful,” she added.
•••
Kaylynn Sanford Wilster, who resides in Piney Flats near Boone Lake, posted a comment.
“A dear friend told me about the Merlin app and it says it heard a rose-breasted grosbeak the other day,” Kaylynn wrote. “I haven’t seen one yet though. I dearly love these birds.”
•••
“We haven’t seen our little visitor this spring,” wrote Laura Evans Barden. “Usually, he has made his appearance in our backyard by now. I love the rose-breasted grosbeaks.
She has the grosbeak’s favorite treat waiting when he does arrive.
“He loves the blue jays’ peanuts,” Laura noted.
Watch this video:
https://www.youtube.com/watch?v=TaNiExDEW9M
•••
Plenty of rose-breasted grosbeaks pass through northeast Tennessee, southwest Virginia and western North Carolina and a few even decide to make their summer home on local mountains. However, these birds spread out widely across the eastern half of the North American continent, ranging from northeastern British Columbia to Quebec and Nova Scotia in Canada. They also range south from New Jersey to Georgia. The rose-breasted grosbeak also reaches Colorado, Oklahoma and Kansas.
For the most part, however, the rose-breasted grosbeak is replaced in the western United States by the closely related black-headed grosbeak.
As fall approaches, the rose-breasted grosbeak migrates south to a winter range that spans central Mexico, Central America and northern South America. As they depart, many of these migrating birds will make autumn visits to again partake of offerings of sunflower seeds at backyard feeders. So, if you don’t get to see these showy birds in the spring, you get another chance in September and October.
The male rose-breasted grosbeak gives this species it name. Males are the epitome of the birds that make their home for part of the year in the American tropics. The contrasting black and white plumage is emphasized by a triangular slash of rosy-red color on the breast. Put all those elements together and the male rose-breasted grosbeak is not a bird that would be mistaken for any other.
The female grosbeak, however, doesn’t stand out in the same way. She is much less colorful than the male. With her brown and white plumage, she is often mistaken for a large sparrow or finch.
Both sexes have a massive bill, which they use to hull sunflower seeds at feeders or glean insects from leaves and branches. It’s the heavy, blunt bill for which the term “grosbeak” is derived. “Gros” is a German term for large or big, so grosbeak simply means a large-beaked bird. People who band birds to further the study of them will tell you that rose-breasted grosbeaks can inflict a wicked nip. In Northeast Tennessee, bird banders frequently encounter rose-breasted grosbeaks in their mist nets — and bear the scars to prove it.
With some birds, males play only a minor role in the nesting process. That’s not the case with the rose-breasted grosbeak male. The males help with nest-building chores and share responsibility with the female for incubating the eggs.
The female lays three to five eggs in a cup-shaped nest. It’s not easy to locate the nests since the birds usually place them in trees at least 20 feet above the ground. Within two weeks, the eggs have hatched and the parents are kept extremely busy finding enough food to satisfy the voracious nestlings. Well fed by both parents, the young grow quickly and usually are ready to leave the nest within 12 days. Often, when a first brood of young departs the nest, the male will care for the rowdy group of fledglings as the female starts a second nest to capitalize on the long days of summer.
Away from our feeders, rose-breasted grosbeaks feed on insects, seeds, fruit and even some leaf buds and flowers. I’ve seen these birds satisfying a sweet tooth — or should that be sweet beak? — by feeding on jewelweed flowers and apple blossoms. If sugar’s good for hummingbirds, I am sure it is a valuable energy source for rose-breasted grosbeaks, too.
The rose-breasted grosbeak is a cherished spring visitor that never fails to disappoint by bringing a hint of the tropics to the mountains.
Watch this video:
https://www.youtube.com/watch?v=qrSTP1s6pis