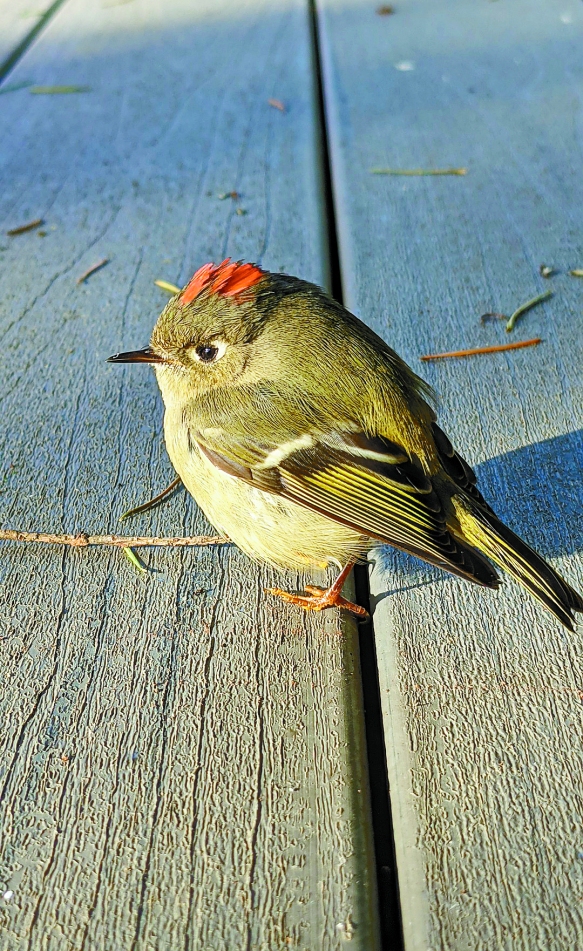 Photo by Steve Carson/Pixabay • Only male ruby-crowned kinglets show the red crown patch that gives the bird is common name.

White-breasted nuthatch or red-breasted nuthatch? Common yellowthroat or yellow-throated warbler? Greater yellowlegs or lesser yellowlegs? These and others are some of the identification questions new birders struggle to answer. The coming winter season provides the perfect opportunity for getting to know the region’s birds better if for no other reason than there are fewer species in residence.
Color, markings and behavior are some of the things to consider when trying to identify a new bird. Another consideration is size. In our region, if the bird’s tiny (even smaller than a chickadee, for instance) the possibilities narrow to two related species known as kinglets.

As their name suggests, kinglets are tiny birds. In fact, the only birds in the eastern half of North America that are smaller than kinglets are some of the hummingbirds. Most of the kinglets, known outside North America as “flamecrests” or “firecrests,” belong to the family, Regulidae, and the genus, Regulus. The family and genus names are derived from a Latin word, regulus, which means “rex,” or “king.” The name was apparently inspired by the colorful crown patches, often red, orange or gold, that resemble the royal “crowns” of kings.

Photo by USFWS • Ruby-crowned kinglets are winter visitors throughout the region.

Four other species of kinglets can be found in North Africa, Europe and Asia. Experts recently removed the ruby-crowned kinglet from the genus Regulus and placed this species in a separate genus, Corthylio. The reclassification was based on size (the ruby-crowned kinglet is actually the largest member of this family) and differences in vocalizations.

Kinglets are very active birds. If warblers can be described as energetic, the kinglets are downright frenetic in their activities. The kinglets almost never pause for long, flitting from branch to branch in trees and shrubs as they constantly flick their wings over their backs. These bursts of hyperactivity can make them difficult to observe. Although small in size, these birds more than compensate for it with a feisty spirit that does them well through the harsh winter months.

Kinglets often join mixed flocks comprised of other species of birds, some of which are regular feeder visitors. Perhaps by observing their flock counterparts, some kinglets have learned to accept feeder fare such as suet, mealworms and chopped nuts. Away from feeders, kinglets mostly feed on a range of small insects and arachnids. These tiny birds will also consume some fruit, such as the berries of poison oaks and dogwoods.

By learning the ruby-crowned kinglet’s call, which is a harsh, fast, two-parted scold that, to my ears, sounds like “Jit Jit,” birders can detect the presence of these tiny birds in thickets and other dense vegetation.

Normally, kinglets have a rather fleeting lifespan. These tiny birds can be considered old if they live three or four years. There are always exceptions. The oldest golden-crowned kinglet on record was six years and four months old. That individual, a male, was documented by a bird bander in 1976, according to the website All About Birds.
Overall, kinglets are trusting, tame birds and a welcome addition to any flocks visiting your yard and garden. These tiny feathered sprites are definitely worth getting to know.