I received a recent email from Flag Pond reader Amanda Austwick with the header, “Bird Feeders Damaged.” I get calls and emails about lots of unusual feeder visitors, but this one sort of stood out from the rest.

In the email, I was asked if I had any idea what would attack a bird feeder in late afternoon in June?

“I’ve heard of bears attacking a feeder in winter,” she wrote. “We do have bears up here, but I haven’t seen any in years.”

The damage to the feeders wasn’t minimal.

“One feeder was completely bent over on the ground,” she wrote.

At the time of the incident, there hadn’t been any rain. As a result, the animal that attacked the feeders left no prints.

I responded to the email with the belief that the animal responsible for the damage was likely a Black Bear.

“It sounds exactly like a bear,” I informed Amanda. “Actually, most of the reports of bears damaging feeders I have heard about have taken place in spring and summer. I suppose if a bear finds your feeder, however, it may be inclined to damage them at any time of the year.”

I also pointed out that the bear is actually just feeding on the seed. The damage is a by-product caused by the fact they probably don’t know their own strength.

“I know you will miss your birds, but it would probably be best to stop feeding for a couple of weeks,” I informed Amanda.

I suggested that after the two-week hiatus on feeding the birds that she put the feeders back outdoors but arrange to take them inside during the night.

“I know this first incident took place during the day, but bears are still most often going to visit during the night,” I wrote to her.

Unfortunately, the bear returned before she received my email response. The animal caused even more damage to the feeders, which she was able to document with photographs. A photo that she also emailed to The Erwin Record was even featured on the newspaper’s front page a couple of weeks ago.

By making the feeders absent for a time and then limiting the availability of the bird seed to daylight hours, perhaps this bear will lose interest and move on. Unfortunately, the attempt to deal with the problem came too late to prevent the bear from causing some property damage.

Residents in Flag Pond and other locations in Unicoi County are certainly not the only people that have to contend with bears.

Every year the Tennessee Wildlife Resources Agency receives hundreds of calls and complaints concerning black bears. According to TWRA’s website, most of the complaints involve bears raiding garbage containers and bird feeders, as well as feeding on pet food left outdoors.

The website also makes clear it is not TWRA policy to routinely trap and move bears causing these types of problems.

“Due to the relatively large home ranges and mobility of bears, there is no place remote enough in Tennessee to relocate bears where they will not have contact with humans,” the website states. “Secondly, by moving bears often all that is accomplished is just the problem has been moved and not solved.”

According to experts with TWRA, the long-term solution to bears raiding garbage containers, bird feeders and pet food left outdoors is to simply remove the food source and bears most often will go elsewhere.

The website even notes that some people even intentionally feed bears. As often happens, even the best of intentions can go awry.

As a result of the improper storage of garbage, easy availability of bird seed and the direct feeding of bears, animals often become habituated to humans and become a nuisance and a threat to human safety.

Sadly, according to TWRA officials, there are no other alternatives but to destroy bears that become a threat to human safety. The agency spent hundreds of man-hours last year addressing bear-human conflicts and some bears had to be destroyed as a result of irresponsible behavior of people directly and indirectly feeding bears. 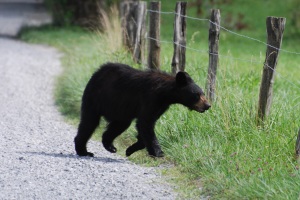 TWRA notes that the fact “Garbage Kills Bears” is irrefutable and urges people to remember that a fed bear is a dead bear. TWRA encourages residents to educate themselves by being “bear aware.” The agency asks all Tennesseans to help keep communities safe by preserving the “wild” nature of bears by following these few simple tips:

• Do not feed bears

• Do not add food to your compost piles

• Keep cooking grills clean and stored indoors when not in use.

• Do not feed birds between April and January when bears are most active.

I don’t agree, however, with this moratorium. Feeders can be bear-proofed, although it requires effort and expense. I also think that feeders can be taken indoors at night to reduce the chance of attracting bears. I will concede that a determined bear willing to visit feeders during the daylight hours may require that all feeding of birds be curtailed, at least until the animal decides to move to greener pastures.

Since the 1970s, the number of bears has significantly increased in Tennessee, according to TWRA. For example, prior to 1980, the annual harvest in the state was usually less than 20 bears. Today the picture could not be more astounding. Since 2004, Tennessee’s annual bear harvest has exceeded 300 animals! In 2009, a harvest of 571 bears in Tennessee set a new state record. 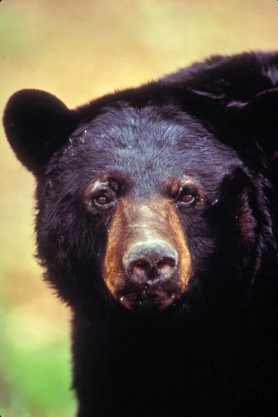 With careful management and enforcement by TWRA and ecological conditions in their favor, bear populations have responded dramatically. Tennessee’s bear population thrives today largely due to the dedication of the TWRA, CNF, GSMNP, the bear research program at University of Tennessee and the support of Tennessee sportsman license dollars.

TWRA maintains that the primary corrective action to this management dilemma is to simply restrict the access bears have to human foods. Tennessee residents and visitors can support bears by taking steps to ensure that wild bears remain “wild,” by carefully managing sources of human food or garbage that might attract bears.

I’ve had neighbors, too, who have observed bears on their property recently. A few of them have even gotten photographs of the bears. I haven’t seen a bear on my property, but many years ago a bear left prints (and damaged some plants) in my grandfather’s tobacco plot. More recently, I’ve found droppings that I am fairly confident were left by a bear.

The bears aren’t going anywhere, so we will probably be encountering them more often. 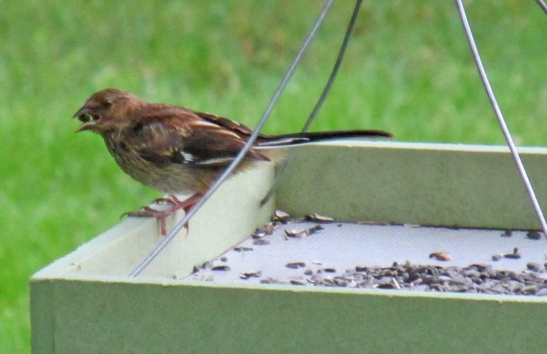 Photo by Bryan Stevens
A young Eastern Towhee visits a feeder in July. The chance to see young birds is a great reason to offer food during the summer, but some precautions should be taken to minimize uninvited guests.