Photo by Bryan Stevens
A total of 231 Song Sparrows, such as the one pictured here, were found during the recent Summer Bird Count.

The 19 observers in six parties logged 58 party hours, plus 5.5 nocturnal party hours. The total of 116 species tallied was slightly above the average of 112. The range for this count has varied between 105 and 121 species.

Photo by Bryan Stevens
The Ruby-throated Hummingbird was represented by a total of 30 individuals on the recent Summer Bird Count.

Photo by Bryan Stevens
Although waterfowl can be difficult to find in Carter County during the summer months, a total of 11 Wood Ducks were tallied for the Summer Bird Count.

All 116 species found on the count are known or suspected to nest in Carter County, except for the Double-crested Cormorant.

Hampton resident Barbara Lake emailed me to share some photos of a clutch of eggs in one of her bluebird boxes. 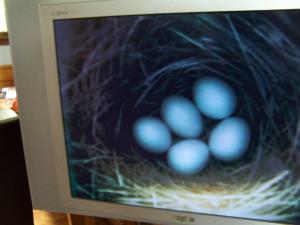 Photo Courtesy of Barbara Lake
A clutch of five Eastern Bluebird eggs in a box at the home of Barbara and Jerry Lake in Hampton.

She actually has two pairs of Eastern Bluebirds nesting in boxes at her home. She has named the bird Blossom and Max, as well as Aliy and Allen. The latter are named for Iditarod and Yukon Quest musher friends.

“I wrote to Aliy and told her I named a bluebird after her, and she is happy about it.  So now I have to keep her up to date about what’s going on.”

Some of Barbara’s bluebird boxes are equipped with television cameras, which allows her to monitor activity on a television screen in the comfort of her home.

Now that it is July, birding sometimes becomes more difficult because of the intense heat, high humidity and other factors. There are still interesting bird observations to make. Many birds are still taking care of young, either in or out of the nest. If you’d like to share an observation, make a comment or ask a question, email me at ahoodedwarbler@aol.com or post a comment here.