I’ve welcomed followers of my blog on birds and birding from as far afield as Canada and England. The love of birds, apparently, knows no borders. This past week, Ontario resident Rob Hicks shared a fascinating rescue story about a Brown Creeper that crashed into a window of his upper-floor apartment dwelling.

He found the bird on the floor of his eighth-floor balcony on April 13.

“I heard a bang outside, so I went to see if something had fallen over,” he said. “I saw the bird, and I thought it was dead.” 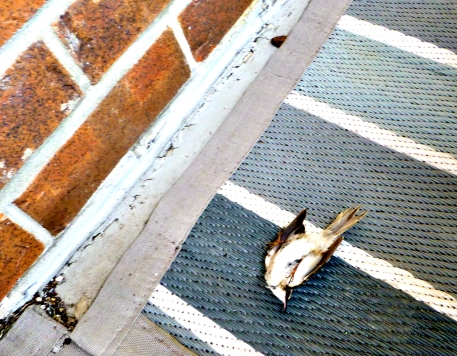 Photo Courtesy of Rob Hicks
This Brown Creeper may appear dead, but appearances can prove deceptive.

Rob said he gently picked up the bird.

“A few seconds later I could see it moving slightly,” he recalled. “His head seemed a bit stuck facing right for a while, and his right eye was closed. The left eye opened so I knew he was alive.”

Rob took the bird inside the apartment.

“I left him on the windowsill while I got water for him, but he didn’t seem interested in that.”

After about 20 minutes, the bird began to get more active.

“He finally opened his other eye and fluttered his wings a bit and stumbled,” Rob said.

Fortunately, Rob caught him and took him outside to the balcony edge. “But he was just gripping my fingers with his claws, so he didn’t seem to want to go anywhere,” he added.

After another five minutes or so, the bird got bold enough and in a second he’d leapt off his hand and flew off like nothing was wrong at all.

Photo Courtesy of Rob Hicks
This Brown Creeper recovers from a window strike in a gentle hand.

Brown Creepers are woodland birds and not usually found far from trees. As is evident in some of the photographs provided by Rob, his apartment is located adjacent to some Canadian woodlands that would provide suitable habitat for a Brown Creeper.

The bird, possibly a migrant, collided with a pane of glass, possibly the door onto Rob’s balcony. Fortunately, the impact didn’t prove fatal and the bird, perhaps a little wiser, was able to fly away from the incident.

The Brown Creeper is a widespread bird across the United States and Canada. Its nesting range extends from Alaska, Ontario and Newfoundland southward throughout western mountains, as well as the Great Lakes region, Southern Appalachians and New England.

In Northeast Tennessee, this bird is considered uncommon. According to the book, The Birds of Northeast Tennessee by Rick Knight, the Brown Creeper is a winter resident at lower elevations in the region. It nests at higher elevations, such as Roan Mountain on the Tennessee/North Carolina border, during the summer months.

Brown Creepers locate their nests behind a peeling piece of bark on a tree trunk. In behavior, this bird is similar the nuthatches. However, instead of inching its way headfirst down a tree trunk, the Brown Creeper typically hitches its way up a tree before flying to the base of a nearby tree trunk and repeating the process. 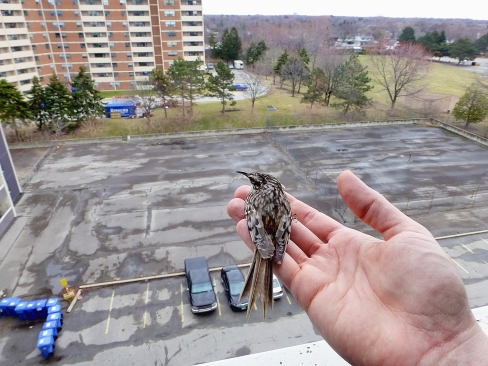 Photo Courtesy of Rob Hicks
The moment of truth arrived when the Brown Creeper successfully flew away to nearby woods when carried to the edge of the eighth-floor balcony.

Against the bark of a tree, the Brown Creeper is extremely well camouflaged. These small birds are often first detected by sharp-eared individuals capable of discerning its soft, lisping call notes. During the breeding season, this bird also produces a thin, musical warble that serves as its song.

The Brown Creeper has long, stiff tail feathers to help support itself against the vertical surface of a tree trunk. It also has a curved bill that is an excellent tool for probing for hidden insects, which provide its food.

I’ve had so many new spring arrivals in the past couple of weeks that it is difficult to keep track of them all.

On April 10, I saw my first Black-throated Green Warbler of spring at Limestone Cove Recreation Area. That same day, I observed my first Green Heron of the season while visiting a small pond on Anderson Road near the Okolona exit from Interstate 26.

I witnessed a Ruby-crowned Kinglet in a Norway Spruce on April 13.

I’ve been hearing Black-and-white Warblers since the second week of April, but I got a good look at one on April 18. These warblers behave much like nuthatches and Brown Creepers, clinging to tree trunks and branches as they explore nooks and crannies for small insects and spiders.

While visiting Austin Springs on Boone Lake on April 19, I got a good look at the first Eastern Kingbird I’ve seen this spring. I also saw my first Spotted Sandpiper of the year.

I saw my first Chimney Swifts of the season on April 24, which also happens to be my mother’s birthday. We saw the swifts flying over downtown Johnson City while meeting other family members for her birthday lunch.

On April 25, I looked out the bedroom window at my home on Simerly Creek Road in Hampton and saw a stunning male Rose-breasted Grosbeak feeding on sunflower seeds contained in a feeder hanging in a Blue Spruce. Later that same day, two male grosbeaks arrived at the feeders at the same time.

That same day, I first started seeing female Ruby-throated Hummingbirds. The males arrived two weeks earlier, as is often the case with these tiny winged wonders.

My sighting of the grosbeaks came a couple of days after my friend, Byron Tucker, reported Rose-breasted Grosbeaks at his home in Atlanta.

One of the most impressive observations during April involved a flock of Rusty Blackbirds that I encountered on April 8 during a visit to the pond at Erwin Fishery Park in Unicoi County. These small blackbirds are of particular concern to many birders and bird experts because of the distressed population decline the species has suffered during the past few decades.

The website, rustyblackbird.org, provides this excellent summary of the threat facing this bird:

“The Rusty Blackbird (Euphagus carolinus) is a widespread North American species that has shown chronic long-term and acute short-term population declines, based both on breeding season and wintering ground surveys. Rusty Blackbirds are ecologically distinct from other blackbirds, depending upon boreal wetlands for breeding and bottomland wooded-wetlands for wintering.”

The decline has been shocking and mysterious. The flock of perhaps a little more than a dozen individuals at Erwin represented one of North America’s most rapidly declining species. The population of Rusty Blackbirds has plunged an estimated 85 to 99 percent over the past 40 years and scientists are completely puzzled as to what is the cause.

Photo by Bryan Stevens
A Rusty Blackbird perches in a tree at Erwin Fishery Park in Unicoi County.

During migration, watch for Rusty Blackbirds in wet areas, such as flooded woodlands, swamps, marshes and pond edges. These moist habitats are their favorite foraging areas in winter and during migration.

I enjoy hearing from readers. Email me at ahoodedwarbler@aol.com or leave a comment here. I’m also on Facebook.