I was saddened to learn of the recent passing of Bob Sargent. With his wife, Martha, Bob was the co-founder of the The Hummer/Bird Study Group. This non-profit organization founded by the Sargents was based in their hometown of Clay, Alabama, and dedicated to the study and preservation of hummingbirds and other neotropical migrants.

Their research programs with hummingbirds and migrating songbirds got underway back in 1987. The HBSG was formed in 1994. The Sargents have described the HBSG as a child born of the necessity to support their continuing research.

The Sargent also became ambassadors in the promotion of hummingbirds. Their specialty became those species of western hummingbirds that have been gradually shifting their migration routes and wintering grounds to include forays into the eastern half of the United States.

In the late 1990s, the Sargents presented a well-attended program sponsored by the Bristol Bird Club. That was the first occasion I had to meet this energetic and dedicated couple. I wrote about the fascinating program in my bird column and shared with readers Bob’s emphasis on keeping sugar water feeders available during the winter months. It was an eye-opening program that tuned me into the phenomenon of wintering hummingbirds.

Not too long after that column ran, I received a call from Bennette Rowan, an artist and Johnson City resident, in November of 1997. She had one of those western hummingbirds at her feeder. After she got in touch with me, the Sargents were also alerted. The couple arrived in Johnson City on Dec. 3, 1997, to band and identify the bird. To the surprise and delight of everyone present, the bird turned out to be an Allen’s hummingbird — the first of its kind ever found in Northeast Tennessee and only the fourth for the entire state. Bennette, who had orginally named her bird “Rusty,” modified the name to Rusty-Allen. The bird remained at her home until Dec. 16 of that year.

A few years later I got to watch the Sargents band another hummingbird at the home of Brenda and Gary Wallace in Elizabethton. On that occasion, I also photographed the couple as they went expertly about the precise job of capturing, documenting, identifying and banding the hummingbird. It turned out to be a female Rufous hummingbird.

As more of these reports arrived every late fall and early winter, the Sargents became overwhelmed and could not respond to each and every case. They began to bring other hummingbird banders under their wing, so to speak. Individuals such as Chris Sloan and Mark Armstrong became principally involved with the documentation and banding of hummingbirds found within the Volunteer State.

I feel extremely fortunate to have known Bob Sargent, who died Sept. 7, 2014, at the age of 77.  An electrician by trade, he leaves a lasting legacy of more than a quarter-century of research into the mysteries of some of our tiniest birds.

Several birders across Tennessee posted tributes to Bob on the TN-Birds list-serve forum.

Cyndi Routledge of Montgomery County described him as a “dear friend and mentor” who “positively impacted my life in infinite ways as he did with endless others. He leaves a legacy of hummingbird banders and hummingbird lovers across the United States and even beyond its borders.”

She also made a suggestion to those reading her post.

“And perhaps at some point today, go outside, sit near your hummingbird feeders, listen for the hums and chirps of those tiny miracles and give thanks for Bob, for his life and for those birds,” she wrote in her post.

Jud Johnston of Waynesboro, Tennessee, commented on Bob’s death. “A great loss for birders and birding in the Southeast,” Jud wrote.

In the years since I saw that program, presented in such educational and entertaining fashion by Bob and Martha Sargent, hardly a year has gone by when a reader hasn’t alerted me to the presence of one of those “brown hummingbirds” that show up at their feeders when the Ruby-throated Hummingbirds have already flown south for the winter season.

In the next couple of weeks, the Ruby-throated Hummingbirds that have made our spring, summer and fall so delightful will once again disappear. They’ll return in about six to seven months, but our lives will be a bleaker without them.

This is where things can get interesting. Don’t take down your feeders. Keep a supply of sugar water available as “bait” to attract any Rufous Hummingbirds, or even Allen’s or Black-chinned Hummingbirds that might decide to spend late fall and early winter with you.

So, be very attentive to any hummingbird that arrives at your feeders in late October or early November. Most Ruby-throated Hummingbirds depart the region in early October. Many of these winter-visiting hummingbirds show a great amount of brown plumage instead of the usual green. Any of these conditions may indicate you’ve been gifted with a rare visit from one of these exceptional little birds. If you are so fortunate, please send me an email at ahoodedwarbler@aol.com. 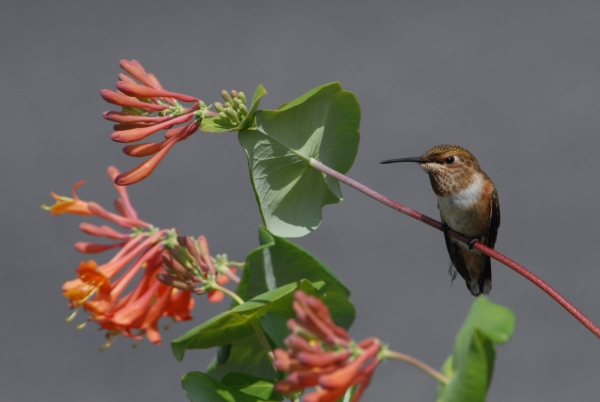