A flock of American Crows provided some drama on Sunday, Nov. 23. The crows, perhaps with good reason, didn’t appreciate finding a Red-tailed Hawk in their airspace. The flock spent around 20 minutes directing an aerial bombardment against the hawk, which finally got the hint and moved out of the territory claimed by the crows. 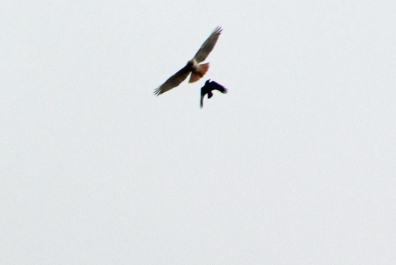 I posted on Facebook about the incident, which prompted a response from Rita Schuettler. “I rarely know that a hawk is around until the crows up here start raising a ruckus,” Rita wrote. “It is fun to watch them chase the hawk all the way down the valley and outa here!” 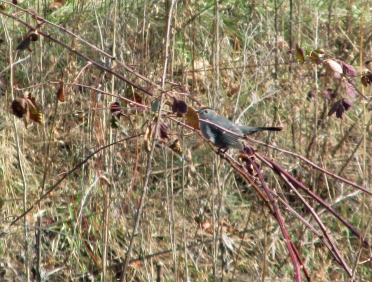 In addition to the fun observation with the hawk and crows, I discovered an unseasonably late Gray Catbird in my yard. I actually heard the catbird’s namesake cat-like scold vocalizations before I saw the bird. Catbirds are common birds in my yard from spring to fall, but they usually depart in early October. I thought that was the case this year, too, but then this straggler showed up. The catbird has put in some other appearance since its initial appearance on Saturday, Nov. 22.

In recent years, catbirds have been found on several of the Christmas Bird Count conducted in Northeast Tennessee, so it’s a distinct possibility that a few of these birds have taken to spending part of the winter here rather than flying south. 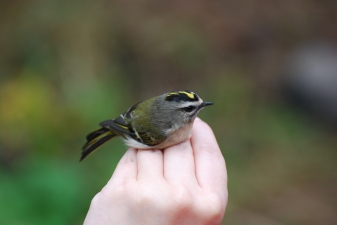 Both the golden-crowned and ruby-crowned kinglets are members of a family of tiny birds known collectively as kinglets and firecrests. They’re such tiny, energetic birds that they absolutely excel with the “cuteness” factor.

All kinglets are very tiny birds, as well as extremely active ones. They are also the only members of this family of birds found in North America. Four other species, however, are native to Europe, Asia and North Africa. The remaining species include goldcrest, common firecrest, Madeira firecrest and flamecrest, which is also known as the Taiwan firecrest. 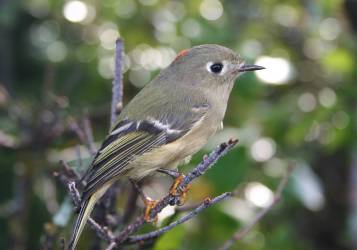 Kinglets, as their name suggests, are tiny birds. In fact, about the only North American birds smaller than kinglets are some of the hummingbirds. The kinglets belong to the family, Regulidae, and the genus, Regulus. The family and genus names are derived from a Latin word, regulus, which means “rex,” or “king.” The name was apparently inspired by the colorful crown patches, often red, orange or gold, that resemble the royal “crowns” of kings. 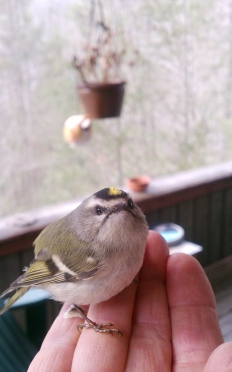 Photo Courtesy of Beth McPherson  This Golden-crowned Kinglet was in good hands as it recovered from striking a window.

Kinglets are active birds, foraging vigorously for small insects, and spiders. When foraging, both kinglet species have a habit of flicking their wings over the backs. Even if you can’t get a good look at the birds, this behavior helps contrast them from other small birds, including some warblers, wrens and the blue-gray gnatcatcher. 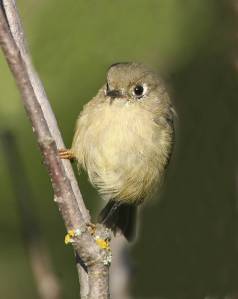 Photo by U.S. Fish & Wildlife Service  A Ruby-crowned Kinglet forages for insect prey in the branches of a small tree.

Kinglets don’t typically visit feeders, but they do tend to join mixed flocks with membership consisting of such species as tufted titmouse, Carolina chickadee and white-breasted nuthatch. When traveling with such flocks, kinglets may visit the space around feeders but rarely take seeds or other fare offered at feeders.

Kinglets are surprisingly tame at time and often exhibit as much curiosity about us as we display toward them. They’re very active birds, however, constantly moving from perch to perch. These bursts of hyperactivity can make them difficult to observe since they so rarely remain still. Although small in size, these birds more than compensate for it with a feisty spirit that does them well through the harsher weather of the winter months.

1 thought on “Kinglets are tiny in size, big in spirit”