Wrens are known to nest and roost in some unusual places, as shown in this painting of wrens nesting in an old hat by artist John James Audubon. 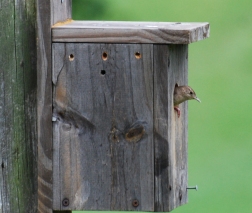 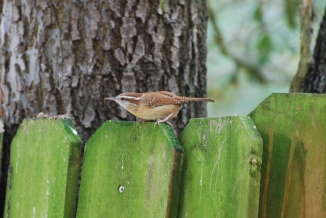 Nature’s not always neat and tidy. In fact, nature operates with rough-and-tumble mechanisms that, all too often, put some of our favorite birds at odds with each other. Like any other living creature, birds compete for resources — food, water, prime nesting real estate and even mates. Some of those pretty and entertaining birds at your feeder or bird baths have a dark side that isn’t often glimpsed.

When some insight is gained into these behaviors, it’s only human to feel discouraged, disenchanted or dismayed. Nonetheless, some recent emails have reminded me to look at some of these more distressing incidents as teaching moments.

Joy Stewart emailed me asking for advice on a problem with rival nesting birds in her yard.

Photo by Jean Potter • A house wren brings a delivery of food to waiting young.

“I have a total of 10 bird houses in my yard,” she wrote. “They are sized for a variety of bird species, and most years nearly all are filled—usually wrens, bluebirds, tree swallows, nuthatches or finches.”

At a recent get-together, she talked with a woman who also puts out bird houses and works hard to attract birds. “She talked at length about how bad house wrens are and how they destroy or kill bluebird eggs and babies,” Joy wrote. “She described how these wrens had just killed a house full of baby bluebirds. The woman also said house wrens are not native to this country.”

Joy noted that she usually tries to keep track of these types of issues, but the woman’s claims were all shocking news to her and made her wonder if such cutthroat competition might explain why her bluebirds seem to have absented themselves from her yard.

She ended her email by asking two questions. “Is the problem as bad as it sounds?” Joy inquired. “Also, how do I now work to get rid of the house wrens that have been coming to my two wren houses for over 10 years?”

She noted that just permanently taking down the houses would likely not work. “If nothing else, they will just move into the slightly larger houses,” she noted.

I replied to Joy’s email, noting that her friend is partly correct, but has confused house wren and house sparrow. From her description, I also noted that it appears she has house wrens in her yard.

The house wren is a native bird; the house sparrow is not a native bird, but was introduced into the country. Its true origins are Africa/Europe.

However, as cavity-nesting birds, both the sparrow and the wren compete with bluebirds. Legally, Joy can take steps to “control” house sparrows. As non-native birds, they are not protected.

Photo by U.S. Fish & Wildlife Service • House sparrows, such as this female, are non-native birds that pose a serious threat to native cavity-nesting birds such as Eastern bluebirds.

However, the house wren is a native bird. I also happen to like house wrens. They have such bubbly, happy songs, and they’re good parents. They can raise as many as 10 young in one nest box.

Unfortunately, both the wren and the sparrow engage in ruthless behavior when it comes to nesting. Both species will evict bluebirds and other birds from boxes. They will even destroy eggs and young. Bluebirds can and do fight back, but despite their small size, house wrens are very feisty.

House wrens like brushy habitat that offers a lot of cover. I suggested Joy might consider trimming back or eliminating brush and hedges. Open space is also more attractive to bluebirds. Of course, chickadees and nuthatches also like brushy habitat and woodland edges, just like the house wrens.

It’s complicated, but I come down on the side of our native birds. House wrens have their place, but house sparrows should never have been in this country in the first place. I advised that Joy leave the wren boxes available to forestall the wrens deciding they have to fight other birds for a box. At the same time, I would not place any other boxes close (at least not within easy view) of the wren boxes, as wrens are very territorial.

In response to a follow-up query, I suggested that placing the boxes completely out of sight would be the best rule of thumb. Try to have a building, a wall, or perhaps a large tree blocking the wren boxes from other boxes. At least this way, perhaps the adult wrens won’t be viewing the competition. It would be advisable to keep as much space between the wren boxes and the boxes meant for other birds as is practical and possible.

An email from another reader likely involved a nesting wren. These small birds are rather notorious for choosing odd nesting sites. I’m thinking it is that tendency that explains Vivian Tester’s recent email asking for some suggestions for a somewhat unique problem.

“I’m looking for advice,” Vivian wrote. “I have a bird that has made a nest on my car windshield. I have driven the car a few times and she will fly away when I start the car, but I don’t want to do anything to harm her or the eggs.”

The situation had her baffled. “How long should it take for the process of laying eggs and them hatching and leaving the nest?” Vivian asked.

She noted that she had not been able to see any eggs. She added that the nest’s construction starts at the windshield and goes into the area under the hood. “I haven’t tried to open the hood in case it would destroy the nest,” she wrote.

Surprisingly, Vivian said the same thing happened last year but she just kept removing the nest. “I’m just not sure what I should do,” she wrote.

In my reply, I told Vivian that it sounds like she has a wren or perhaps a sparrow, and it can take 12-16 days for the eggs to hatch. The young must then spend another 10-12 days in the nest, so it could be at least four weeks for the entire process.

I suggested that, unless she could go without her car for a month, she should open the hood and gently remove the nest somewhere close by. A box or crate could hold the nest and the parent birds are likely to simply move from the car over to the new location for the nest. The parents are more attached to the nest itself than they are your car.

I admitted that I was sort of “winging” it on this problem. While a car is an odd choice for nesting, I’ve heard of birds such as swallows that nest on boats and then follow the boats along their river routes.

After I responded, Vivian emailed me back. “I wanted to update you on the bird nest,” she wrote. “I did move it today into a hanging basket just above my car.”

The nesting bird flew away when Vivian opened the hood. “I am hoping she will return since I did see four little eggs in it,” she wrote.

I believe Vivian’s bird is probably a Carolina wren. I’ve observed these wrens, a slightly larger relative of the house wren, nesting in an old apron my grandmother used as a bag for her clothespins, as well as a plastic shopping bag hanging from a nail in my garage. A pair also once tried to nest in the exhaust vent for my clothes dryer.

Worldwide, there are about 80 species of wrens. All but one of the world’s wrens are confined to the New World. A variety of common names describe the various species with some creativity, including such monikers as tooth-billed wren, flutist wren, white-headed wren, sepia-brown wren, fawn-breasted wren and moustached wren.

Bryan Stevens lives near Roan Mountain, Tennessee. To share a sighting, make a comment, or ask a question, send email to ahoodedwarbler@aol.com.