Photo by Bryan Stevens • A ruby-throated hummingbird visits a feeder for a sip of sugar water. 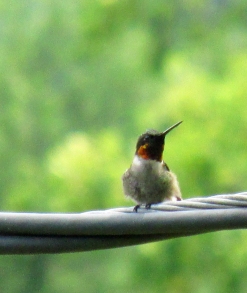 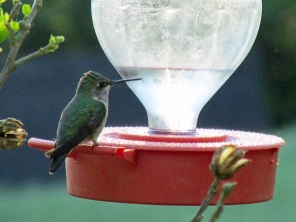 Photo by Bryan Stevens • Male ruby-throated hummingbird show the namesake red throat. The feathers on a male’s throat are iridescent, which means they can change when seen from different angles. In poor light, the ruby-red throat can look almost black. 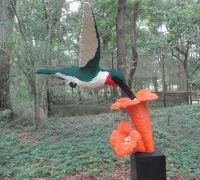 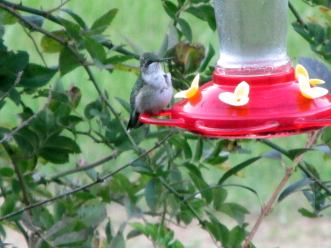 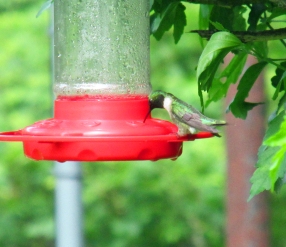 Photo by Bryan Stevens • A ruby-throated hummingbird sips from a sugar water feeder.

From the shade of my front porch, I watched about a half dozen ruby-throated hummingbirds cavort among the blooms of a large mimosa tree on a recent evening. The tree apparently holds an extraordinary attraction for the hummingbirds, as well as the pipevine swallowtail butterflies and other pollinating insects. I enjoyed watching the greenish hummingbirds zip among the profusion of pink mimosa blossoms, which have always reminded me of the thin fiber-optic filaments popular on some artificial Christmas trees and other decorations during the holidays. To draw so many different insects, as well as hummingbirds, the mimosa blooms must provide a rich source of nectar.

While I have almost wilted from the recent extended heat wave, the ruby-throated hummingbirds at my home appear to have downright thrived during these sunny, hot days of mid-summer. Once again, these tiny birds must have enjoyed a successful nesting season, based on the numbers of young hummers visiting both my feeders and flowers. The uptick in the presence of hummingbirds took place without much fanfare, but after a couple of months of “hummer doldrums,” it was impossible for any observer to miss the way these tiny birds have become much more prevalent in recent weeks.

Coinciding with this resurgence of the hummingbirds at my home, I received a post on Facebook from Philip Laws, a resident of Limestone Cove. Apparently, Philip, too, has noticed that hummingbird numbers are on the rise.

Photo by Bryan Stevens • A male ruby-throated hummingbird perches near a feeder that he is ready to defend from all comers.

“Seemed like a slow hummingbird summer,” he wrote. “But two days ago the babies started hitting the feeders and everything looks much brighter!”

I also enjoyed a recent phone conversation with Erwin resident Don Dutton, who wanted to know why hummingbirds have been scarce around his home this summer. I’ve noticed fewer hummers at my own home this summer, but it’s natural for numbers to fluctuate from year to year. I anticipate that numbers will rise as hummingbirds begin migrating south again in the coming weeks. At that time, the adult hummers will be joined by the young birds from this season’s successful nesting attempts.
Don shared that when he lived out west, he often visited Mount Charleston near Las Vegas, Nevada, where he saw swarms of hummingbirds comprised of various different species. In the eastern United States, the only nesting species is the Ruby-throated Hummingbird.

For readers who have felt slighted by hummers so far this season, perhaps it’s time to try your luck again at attracting them. The surest method is to keep a sugar water feeder available to attract them on their way south later this summer and into the fall. A visit to a plant nursery can also provide an abundance of blooms to use to lure hummers to your gardens. Some late-blooming summer flowers attractive to hummingbirds include canna, cardinal flower, gladiola and crocosmia. While the widely held belief is that hummingbirds prefer red blooms, they will gladly visit any flower that rewards them with a sip of nectar. 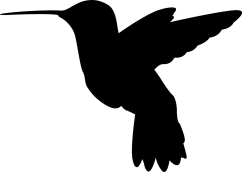 Late summer and early fall, even more so than spring, are usually the best times to enjoy hummingbirds, when they are usually at their most common. There are a couple of reasons for this annual increase. First, nesting female hummingbirds have reared their young, which then begin visiting feeders and gardens to compete with their elders at flower blossoms and sugar water feeders. Second, adult males and females that migrated farther north usually begin swinging southward again in late July and early August. 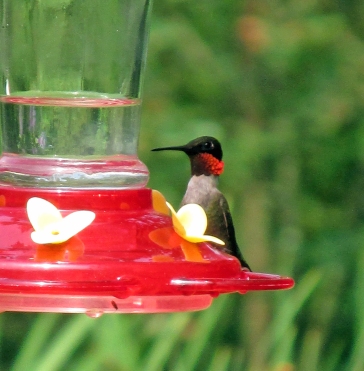 Photo by Bryan Stevens • A male ruby-throated hummingbird perches at a feeder for a sip of sugar water.

Despite their tiny size, hummingbirds are tough birds. One species, the rufous hummingbird, ranges as far north as Alaska. Several tropical species have adapted to the frigid conditions that occur at the higher elevations of the Andes Mountains.

As I have done in years past, I advise a patient but proactive approach for attracting hummingbirds. Keep feeders readily available. If possible, offer flowers, too. Don’t keep your landscape too tidy. A perfectly manicured lawn is like a desert for hummingbirds. Provide some shrubs and trees to provide cover and perching branches. Water features, particularly waterfalls and fountains, are also a reliable means of attracting hummingbirds, as well as other birds.

If you have felt slighted by hummers so far this year, keep a sugar water feeder available to attract them on their way south later this summer and into the fall. To share a sighting, make a comment, or ask a question, send email to ahoodedwarbler@aol.com.

Bryan Stevens has been writing about birds since 1995. To learn more about birds and other topics from the natural world, friend Stevens on Facebook at https://www.facebook.com/ahoodedwarbler. If you have a question, wish to make a comment or share a sighting, email ahoodedwarbler@aol.com.