Photo by Dave Menke/USFWS • A black line running through the eye bordered by a white stripe, as well as a rusty-red cap, helps distinguish the chipping sparrow from other “little brown birds” that belong in the sparrow family.

I needed to do some homework before I could answer a question posed to me by Frances Rosenbalm of Bristol, Tennessee. As she communicated to me in an email, she had discovered a bird’s nest in her garden and wanted help identifying the species that built the nest.

“I have a bird that made a nest in the top of my tomato vines,” Frances explained in her email. “It had four turquoise speckled eggs in it.”

Frances described the nest as being made with large twigs and moss. “What kind of bird do you think it may be?” she wrote. She also noted that her garden is located near a farm field.

“I was so surprised to find this nest,” she wrote. “In all of all the years I have put a garden out, this has never happened,” Frances concluded.

After doing some research, which included poring over the pages of a great book by Hal H. Harrison titled, “A Field Guide to Birds’ Nests: United States East of the Mississippi River,” a work in the Peterson Field Guides series, I was able to write back to Frances with the news that I might have solved the mystery of the nest in the tomato vines.

The Harrison field guide is an exceptional book and one that’s perfect for someone who wants to know a little more about the birds other than their names. Entries for each bird include photographs depicting both the nest and the eggs as well as informative text with supplemental information about nesting birds in the Eastern United States.

Based on the description of the nest and its eggs, as well as its location near a farm field, I identified the nest described by Frances as belonging to chipping sparrows. I found some photographs online of chipping sparrow eggs in a nest and sent that in an email for her to consider.

Frances responded in another email. “I do believe you are right,” she wrote. “The eggs look a lot like the photo, and I have seen some birds that look like (chipping sparrows) flying around.”

For a species often lumped under the grouping of “Little Brown Birds,” the chipping sparrow is quite distinctive. In spring and summer, chipping sparrows sport a crisp, neat plumage with frosty gray underparts, a gray and white face and a striking black line through the eye. An easily recognizable field mark is the bright rusty crown atop the bird’s head. 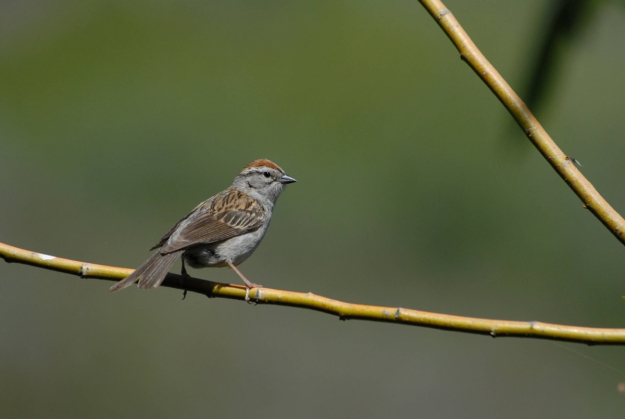 Photo by Dave Menke/USFWS • Chipping sparrows will form flocks for the winter season.

When horses were more common in daily American life, the chipping sparrow took advantage of this resource to almost invariably line their nests with horsehair. Now that not all nesting chipping sparrows have access to horses, these birds use fine plant fibers or hair gathered from other sources, including people, to line their nests.

Once a nest is constructed, a female chipping sparrow lays and incubates three to four eggs, which take about 14 days to hatch. Chipping sparrows often attempt to raise two broods in a single nesting season. Although dense evergreen trees are a preferred nesting location, these birds will also nest in vines.

During the warm months of the summer nesting season, chipping sparrows feed almost exclusively on insects. When winter makes insects scarce, these small birds switch their diet to one of seeds. Chipping sparrows will also feed on small fruits and berries.

Chipping sparrows will sometimes nest as many as three times in a single season. Although territorial during the nesting season, these birds form sizable flocks for migration and during the winter season. In making reference to these flocks, observers can use other descriptive terms. Flocks of sparrows have also been called a crew, a flutter, a host, a tournament and a quarrel. I am partial to a flutter of sparrows, but anyone who has watched the pecking order at the feeders will also understand the origins of a quarrel of sparrows. 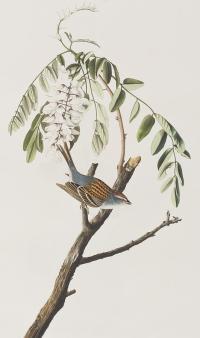 There are a couple of well-known Biblical passages using sparrows for powerful pieces of symbolism. One alludes to the fact that if God provides for small songbirds like sparrows, he will certainly provide for human beings. In addition, there is a passage that maintains that not a single sparrow falls without God being aware of the loss. A famous hymn, “His Eye is on the Sparrow,” is based on such biblical verses.

The world’s sparrows are divided into two large groupings — the Old World, or true sparrows, and the American sparrows of the New World.

Although largely considered rather dull, plain birds in appearance, some of them have earned descriptive names such as great sparrow, Arabian golden sparrow, green-backed sparrow, five-striped sparrow, yellow-browed sparrow and golden-crowned sparrow.

Photo by Bryan Stevens • A field sparrow perches on a branch. These sparrows are closely related to chipping sparrows and relatively common in Northeast Tennessee.

Welcome chipping sparrows and their kin with a well-stocked feeder and perhaps some thick tomato vines for concealing a nest. Unfairly dismissed by some as plain, dull songbirds, the sparrows reward a closer look with some subtle behaviors and plumages as worthy of additional attention as much as some of their more colorful relatives.