For many birds, fall migration is well underway. The first hints of fall migration are being reported by area birders who have reported sightings of everything from egrets and terns to warblers and shorebirds. I got my first indication of migration on Aug. 27 when I observed an American redstart, black-throated green warbler and black-and-white warbler in my yard.

Photo by Bryan Stevens • An American redstart forages in the branches of a willow tree.

The yearly rush to return to the tropics is a true natural phenomenon among birds such as the broad-winged hawk. Hundreds if not thousands of these raptors will pass through the region at points like the abandoned fire tower on Clinch Mountain near Mendota, Virginia. Records on migrating raptors have been kept at this location since 1958. The broad-winged hawk, a raptor found in the region during the summer, makes a migration flight back to South America every fall that astonishes human onlookers who gather along mountain peaks to witness the spectacle. The hawks form large flocks, also called kettles, that can number in the thousands.

The broad-winged hawk belongs to the genus Buteo, which includes such related raptors as the red-shouldered hawk, rough-legged hawk and red-tailed hawk. In the Europe, members of this genus of hawks are often called “buzzards,” a term that came over with early settlers in North America. To this day, many people still refer to any large, soaring bird as a buzzard.

Many birds migrate out of the tropics each spring to avoid competition from numerous relatives. Others find North America a land of abundant, albeit temporary, resources. This land of plenty offers a wealth of insects, seeds, fruit and other nourishing, nutritious food to help parent birds keep their strength while they work to ensure their young thrive. 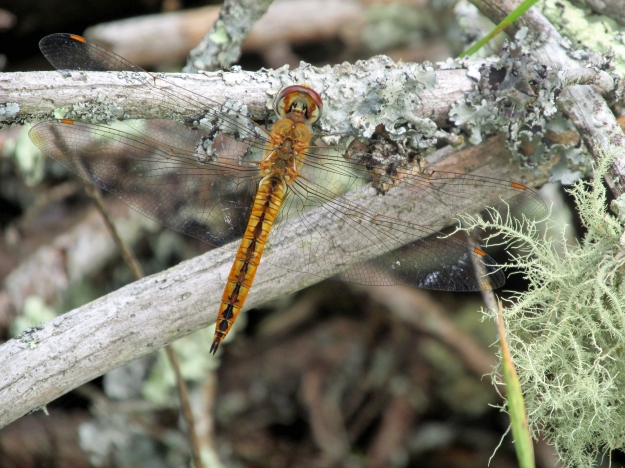 Photo by Bryan Stevens • Experts have documented long-distance migration flights by the Wandering Glider, a species of dragonfly.

The phenomenon of migration isn’t exclusive to the neotropical migrants of the New World. Birds in other parts of the world migrate, too. Migration isn’t even exclusive to our fine feathered friends. Many creatures, from wildebeest and caribou to dragonflies and butterflies, impress humans with their endurance as they stage seasonal migrations.

The Arctic tern takes the practice of migration to extremes. This small seabird travels each year from its Arctic nesting grounds to the Antarctic region, where it spends the winter months. Put into terms of mileage, the Arctic tern can travel about 50,000 miles in a single year. For a bird with a body length of about 15 inches and a wingspan of about 28 inches, this incredible migration is an astonishing feat. 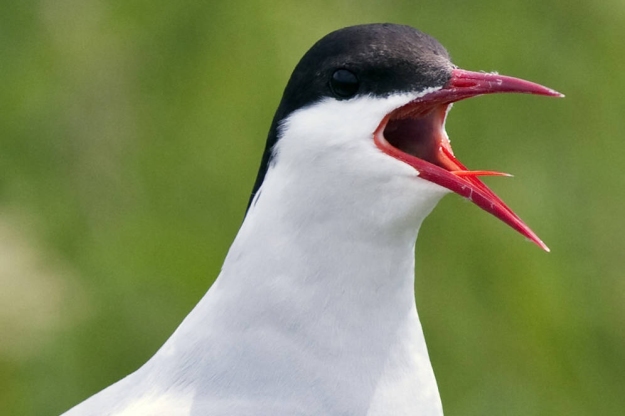 While its migration does not normally bring Arctic terns close to the region, some of this bird’s relatives do offer viewing opportunities for area birders during fall migration. Black terns have been making stops at ponds, rivers and lakes in the region for the past few weeks. This small terns nests on large bodies of fresh water in the interior of the United States and Canada. During the summer nesting season, adult black terns have a black head and body, but the wings are dark gray. By autumn, these terns show an almost entirely white plumage with some darker accents making them similar to other small terns such as Forster’s tern and common tern.

The ruby-throated hummingbird, a favorite of many bird enthusiasts living in the eastern United States, makes an impressive migration each year. Just to reach the United States, these tiny birds undertake a strenuous journey. They leave their wintering grounds in Central America to return to the United States and Canada for the nesting season. Most of these tiny birds, which are barely four inches long, make a non-stop flight of more than 500 miles across the Gulf of Mexico. The journey can take almost an entire day!

However, the ruby-throated hummingbird is not the champion of long-distance migration among hummingbirds. That accolade goes to the rufous hummingbird, which spends the nesting season in western North America, ranging from southern Mexico to as far north as Alaska and Canada. Its migration journey of almost 4,000 miles is made in stages over the course of a few months. Like ruby-throated hummingbirds in the eastern half of North America, rufous hummingbirds require extra energy to successfully complete such a lengthy migration. They pig out on flower nectar, sugar water mixtures at feeders, and tiny insects to ensure they have the reserves to reach their destinations.

Shorebirds, which in North America can consist of birds ranging from turnstones and sandpipers to willets and avocets, are champion migrants. For instance, the bar-tailed godwit makes an impressive non-stop migratory flight. This shorebird nests in parts of Scandinavia, northern Asia and Alaska. Some of these godwits make a nine-day, non-stop migratory flight that takes them from New Zealand to the Yellow Sea of China, a distance of almost 6,000 miles. Needless to say, since the godwits make no stops along the way, they must also go without food for the duration of their journey.

Most of the warblers that nest in North America retreat to Central and South America during the winter months. Few warblers, however, make as great a journey as the blackpoll warbler. Instead of migrating over land, this five-inch-long warbler undertakes a two-stage migration. The first half of the migration is a non-stop flight of about 1,500 miles. Every fall, these tiny birds fly over the ocean during this part of their migration, departing from Canada or the northern United States and not stopping until they reach various locations in the Caribbean. There they will spend some time recovering from the exhausting first half of their journey before they continue their way to such South American countries as Colombia and Venezuela. Once again, during the time they spend flying over open ocean, these tiny warblers do not feed.

Even birds that cannot fly undertake migrations. For instance, the Adélie penguins of the Ross Sea in the Antarctic travel about 8,000-10,900 miles annually to their breeding colonies. Of course, they migrate by swimming, not flying, these long distances. The Australian emu, a smaller relative of the ostrich, makes seasonal migrations on foot to ensure access to abundant food supplies at all seasons.

Photo by Pixabay on Pexels.com

Most of our favorite summer birds — scarlet tanagers, Baltimore orioles, ruby-throated hummingbirds, gray catbirds — will make an exodus in the coming weeks. Even as some of our beloved favorites depart, we can take some cheer in the knowledge they will be replaced by some welcome winter residents, including dark-eyed juncos, white-crowned sparrows, brown creepers and yellow-rumped warblers. Fall is indeed a time of departure for many birds, but it’s also a time to make new friends with the other birds that should soon start arriving in our yards and gardens by mid-October.

Keep alert to the changing of the guard. The mix of bird species in your yard will change dramatically from day to day for the next couple of months. It’s a time bound to yield some surprises.