The parade of warblers through my yard has kicked off. I noticed the first arrivals in the final days of August. A young male American redstart in the wispy branches of a creekside weeping willow represented the first fall warbler to put in an appearance this year. He spent considerable time making his way through the tree branches in search of insect prey. Redstarts, like other species of warblers, lead a very active lifestyle, seemingly always on the go.

In the following days, other warblers joined the redstart, including a black-throated green warbler, black-and-white warbler, black-throated blue warbler and chestnut-sided warbler, as well as other migrants such as red-eyed vireo, gray catbird and blue-gray gnatcatcher. I’m still seeing ruby-throated hummingbirds contesting for access to my sugar water feeders, as well.

Photo by Bryan Stevens • A young male American redstart in the branches of a willow.

The American redstart, even more so than its kin, strikes me as a hyperactive songbird, always on the go, flitting from branch to branch, fanning out its tail feathers or snatching winged insects flushed from cover. During the nesting season, the male sings a jumbled crescendo of buzzy notes.

There are 115 species of warblers found in the New World, but the American redstart is one of a handful that doesn’t include the word “warbler” in its common name. Other members of the warblers that don’t bear the word in their names include Northern parula, ovenbird, common yellowthroat, Northern waterthrush and Louisiana waterthrush.

The adult male American redstart is unmistakable. His mostly black feathers are accented with bright orange-red patches on the sides, wings and tail. There’s a patch of white on the lower belly and under the tail. For beginners who despair of learning the so-called “confusing fall warblers,” an adult male American redstart is so easily recognized that a sighting of one can produce a big confidence boost.

Photo by Bryan Stevens • A female American redstart perches for a brief moment before resuming her active lifestyle.

Females show a similar pattern, being gray-olive where the males are black; females are lemony yellow where the males are orange; both have with the same white underparts. A female redstart works alone at nest construction and also does solo duty incubating up to five eggs.

In autumn and spring, there are young male American redstarts that look like an intermediate form between an adult male and adult female. Adults and young birds all flash and fan their tail feathers almost constantly. Most experts believe the flashes of color in the tail help the birds to flush prey insects into flight. According to the website, “All About Birds,” American redstarts consume more flying insects than most other warbler species. Their dietary preference for winged insects also brings them into competition with other flycatching species, such as least flycatcher.

American redstarts nest in in damp woodlands across much of the eastern and northern United States and southern Canada. This warbler becomes much more general in its habitat preferences during the winter and can be found in Central and South America, as well as the Caribbean. Winter habitat ranges from mangrove forests and scrub thickets to plantations for coffee and citrus fruits. A few even take up residence in wooded section of urban areas. 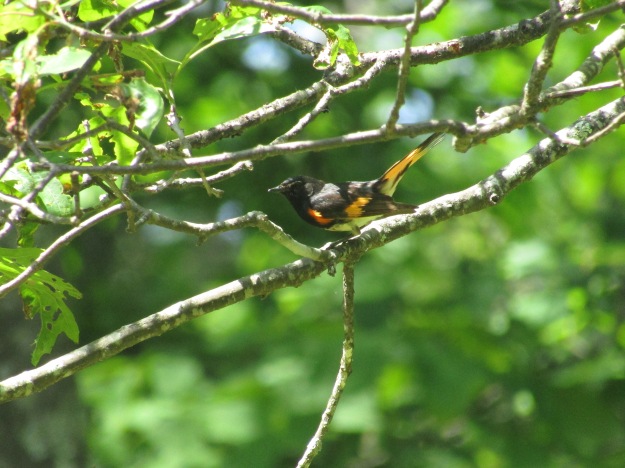 Photo by Bryan Stevens • A male American redstart is easily distinguished from other warblers that nest in North America.

An occasional American redstart defies the odds and achieve a long life, for a songbird. The oldest known redstart was a male more than 10 years old. According to the website, “All About Birds,” that individual was recaptured and rereleased by a Canadian banding station.

Early French and Spanish explorers gave this pretty songbird some names to match its appearance. From the French, the American redstart received the name “paruline flamboyante,” or flamboyant warbler. The Spanish bestowed the name “candelita Norteña,” or Northern candlelight.

Early naturalist and artist painting this scene of a pair of active American redstarts.

Ironically, there is also a family of Old World redstarts, but these birds are closely related to thrushes, not warblers. The species in this family have been gifted with such descriptive names as white-throated redstart, blue-fronted redstart, plumbeous redstart, black redstart and white-bellied redstart.

The warblers are one of the families of birds that got me hooked on birding. They make the fall season an exciting time of the year. I’m always a little sad once the season’s ended, knowing that I won’t see many warblers until next spring. Get outdoors and enjoy migration. You may be surprised what birds visit your own yard.