Photo by Skeeze/Pixabay • A white-throated sparrow perches on a branch to sing its easily recognizable song. Many Americans translate the sparrow’s song as “Ol’ Sam Peabody, Peabody, Peabody.”

The calendar has turned to March, and — when it comes to birds — the month is a time of transition. The season doesn’t know whether it’s winter or spring, but the birds know. They, like me, are anticipating the busy spring season.

The clientele at your feeders may change significantly in March. The winter residents are still present, but newly-arrived birds make appearances. Red-winged blackbird, common grackles, and brown-headed cowbirds, all of which may have retreated farther south during the peak of winter, can arrive suddenly in large flocks to lay claim to offerings like suet and sunflower seeds.

On our lawns, we should be noticing flocks of American robins. Long considered a harbinger of spring, the American robin is actually a year-round resident in the region. Spring’s false starts sometimes take robins by surprise, which results in large flocks of these bird descending on lawns and fields to forage frantically for earthworms and insect grubs.

Photo by U.S. Fish & Wildlife Service/Thomas Barnes • White-throated sparrows are a common winter resident in yards and gardens throughout the eastern United States.

The white-throated sparrow also has a close relative that is a little less common. The white-crowned sparrow is one of the more distinctive species in a family often unfairly dismissed as “little brown birds.” It’s fairly common to find mixed flocks of both of these and other sparrows feeding together. They start the mingling process in the fall, probably to prepare them for the necessity of close proximity when winter makes it necessary to crowd together to find food. At my own feeders, I often host mixed flocks of several sparrows, including song sparrows, chipping sparrows, white-throated sparrows and dark-eyed juncos, as well as the occasional field sparrow or swamp sparrow.

The white-throated sparrow and the closely related white-crowned sparrow both belong to a genus of American sparrows known as Zonotrichia, which includes three other species. These other three — golden-crowned sparrow, rufous-collared sparrow, and Harris’s sparrow — range mostly outside the continental United States. The rufous-collared sparrow ranges throughout Mexico, as well as the island of Hispaniola. Harris’s sparrow is a bird that occurs mostly in Canada, although there are a handful of records in our region. The golden-crowned sparrow is a bird that occurs mostly in Alaska, although some of this sparrow’s population ranges into the northwestern corner of the state of Washington.

The genus name, Zonotrichia, refers to two ancient Greek words for zone and hair, which refers to the pattern of streaks on the backs of these five sparrow species. The Zonotrichia sparrows belong to a large group of birds known as Passerellidae, or American sparrows, which also includes birds such as juncos, towhees and brush finches. Some of the more descriptive names of some of the American sparrows include orange-billed sparrow, white-eared ground sparrow, green-backed sparrow, olive sparrow, cinnamon-tailed sparrow, five-striped sparrow and golden-winged sparrow.

Photo by Bryan Stevens • The white-crowned sparrow is a very aptly named bird.

I love white-crowned sparrows, but they are rare visitors to my feeders. They occasionally pass through my yard in the fall, but they rarely stay more than a couple of days. I get plenty of white-throated sparrows and dark-eyed juncos, however, which is nice compensation. The white-crowned sparrow is more numerous in the western half of the United States. In a trip to Utah in October of 2003, these large, striking sparrows were seemingly everywhere. In the eastern United States, the white-crowned sparrow usually makes appearances as a migrant or a winter resident. These sparrows do seem faithful to wintering locations once they have spent a season. The only requirement for attracting them is a yard that offers some extensive thickets or other brushy habitat. A hedgerow bordered by a spacious lawn or field is also a magnet for this particular sparrow.

This accurately named white-crowned sparrow is easy to distinguish from all the other “little brown birds” in the sparrow family. First, for a sparrow, it’s somewhat large. Second, there’s the distinctive black-and-white head pattern that gives the bird its name. Of course, only the adult sparrows show the black and white head pattern. Young birds show alternating bands of tan and brown in place of the black and white. Both adults and young birds show a crisp gray breast that also helps distinguish them from other sparrows, which often have brown streaking across the breast. A pale bill also sets them apart from most other sparrows likely to visit feeders.

In similarly distinctive fashion, the white-throated sparrow, especially as spring gets nearer, also acquires a plumage that makes it stand out from the flock. These sparrows have a plumper shape than some of their kin. They have a black and white pattern to their head and a neat “bib” of white feathers covers the throat. The standout feature to this bird’s appearance is the bright yellow spot located between each eye and the bird’s bill. Some winter birds may lack this spot of yellow or show a less dramatic version, but the approach of spring usually puts white-throated sparrows into fine form. 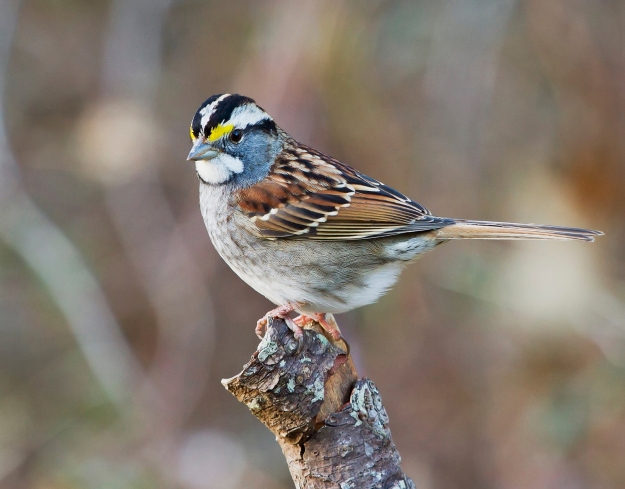 Photo by Skeeze/Pixabay • A white-throated sparrow perches on a branch to sing its easily recognizable song. Many Americans translate the sparrow’s song as “Ol’ Sam Peabody, Peabody, Peabody.”

Many sparrows, including the white-throated sparrow, prefer to forage for food on the ground. It’s often helpful to purchase a supply of millet seed. When filling your feeders with sunflower seeds, scatter a couple of handfuls of millet seed on the ground beneath the feeders or at the edge of a brushy area. Sparrows like to have quick access to dense cover, so they will feed more securely if the scattered seeds are within quick reach of shelter.

Sparrows don’t always co-exist peaceably. According to the website allaboutbirds.com, many of the larger sparrow species are quite aggressive with their kin. This aggression usually demonstrates itself in a tendency to chase other birds. Apparently, white-crowned sparrows will share their territories with fox sparrows — which are larger birds — but they will give chase to chipping sparrows and dark-eyed juncos in an attempt to drive them from the territory.

Most songbirds live a precarious life that can be measured in only a few years. However, an occasional individual defies the odds. According to the website allaboutbirds.com, the oldest recorded white-throated sparrow was at least 14 years, 11 months old, when it was recaptured and rereleased during banding operations in Alberta, Canada.

Listen for the song of this garden and yard visitor as you go about your daily routine. It’s easy to recognize, depending on your preference for the Canadian or American version. Don’t wait too long. Most white-throated sparrows depart the region by late April to reach their summer nesting grounds throughout the forests across Canada, the northeastern U.S. and the northern Midwest.