A wood duck hen and her six ducklings have made my fish pond their home since early July. Although it’s a small pond, the hen and ducklings are skilled at hiding themselves among cattails and lily pads. It’s slightly late in the season, so I suspect this could be a second brood of ducklings for this particular female wood duck.

I’ve enjoyed my infrequent peeks into the lives of the mother and her lively brood. I’ve caught them resting on the bank of the pond on a few occasions. They always dive into the pond with considerable squeaks and squeals, but then they immediately get themselves into a single file formation with mom bringing up the rear as they slowly and without panic glide among the cattails and lily pads until they find hiding places away from my prying eyes and my camera.

Photo by Bryan Stevens • A female wood duck keeps watch over her ducklings in a municipal park pond.

Waterfowl, however, are usually scarce in the summer months aside from the ubiquitous Canada geese and mallards found at ponds, local parks, golf courses and other locations. Waterfowl aren’t entirely absent, of course, especially when you add the variety of domesticated waterfowl that are often found with the aforementioned geese and ducks.

The small wood duck is a species of waterfowl that can be found, in suitable habitat, during the nesting season. In many parts of their range, wood ducks are known as the “summer duck” since they are the only wild native nesting duck present during the season. Another common name for this species is the Carolina duck, which refers to the southern stronghold of this species of waterfowl. Wood ducks are year-round residents across much of the southeastern United States, especially in suitable habitat such as small lakes, flooded woodlands, swamps and marshes.

Photo by Bryan Stevens • Ducklings stick close to their mother as they swim on a pond.

Like a handful of other North American waterfowl, the wood duck is a cavity-nesting bird. These ducks often occupy former nesting cavities created by woodpeckers, but they will also readily accept nesting boxes of suitable dimensions provided by human landlords. Because of their devotion to nesting in cavities, wood ducks have at least something in common with songbirds like Eastern bluebirds, tree swallows and house wrens, as well as larger birds such as American kestrels and Eastern screech-owls.

Wood ducks aren’t the only waterfowl that nest in cavities. Buffleheads, hooded mergansers and common goldeneyes are also cavity-nesting ducks. None of those ducks, however, nest in the southeastern United States. I don’t have any duck boxes on my property, so I believe the hen probably built her nest in a natural cavity in a tree in the nearby woods. 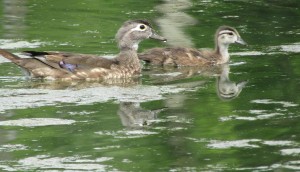 Photo by Bryan Stevens • Her duckling is rapidly approaching the size of this female wood duck.

The wood duck belongs to the genus Aix. The only other species in the genus — the Mandarin duck —is native to East Asia. The two are classified as “perching ducks” by biologists. The males of both these species are among the most ornate ducks in the world. The male wood duck has red eyes and a dark-tipped red bill. The colors in a male’s plumage includes glossy, iridescent greens, purples and browns in dramatic patterns. The male also has a distinctive head crest. Female wood ducks also have crests, but their plumage is overall gray and brown with a teardrop-shaped white patch around the eyes, as well as a white chin and throat.

In his book, “Birds of Lake, Pond and Marsh,” author John Eastman noted that the wood duck was the most abundant of North American ducks during the 19th century. In the late 19th century, pressures from hunting and habitat destruction combined to dramatically lower the numbers of this exclusively North American duck. Eastman noted that the Federal Migratory Bird Treaty Act of 1918 is largely credited with saving the wood duck from possible extinction. From 1918 to 1941, it was illegal to hunt wood ducks. Thanks to this temporary hunting ban and other conservation measures, the wood duck population recovered in dramatic fashion. Recent surveys all point to a species on the rebound with numbers of wood ducks rising for the past several decades.

The creek and the fish pond at my home have proven dependable magnets over the years for attracting visiting wood ducks; however, this is the first year that a wood duck hen has raised her ducklings on the pond. Most wood ducks in the southeastern United States do not migrate. Those that live farther north during the summer will migrate to areas as far south as Mexico in the fall. Fortunately, our region is home to wood ducks year-round. 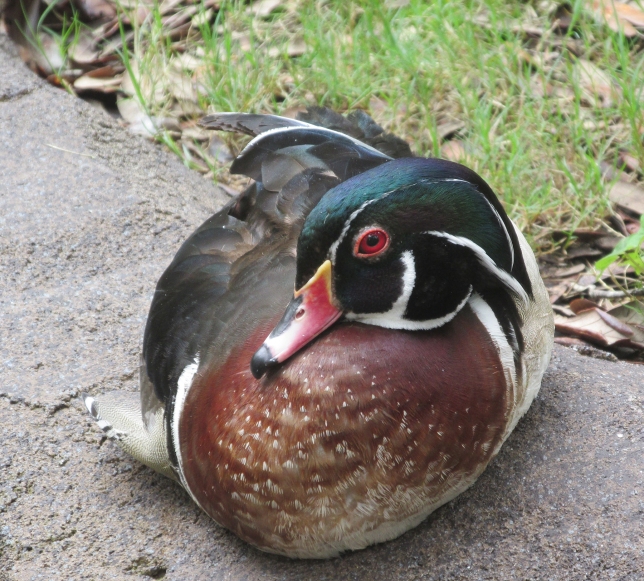