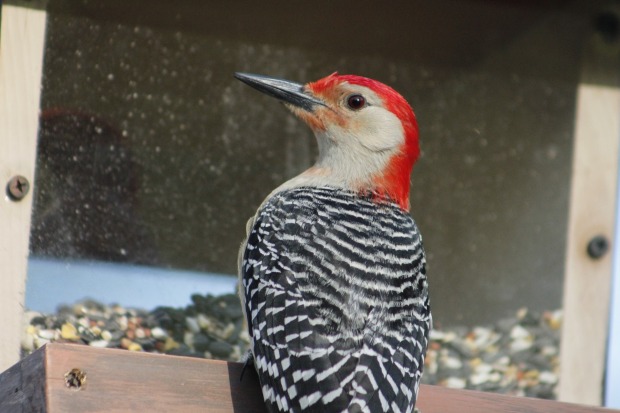 Photo by Georgia Lens/Pixabay.com • A red-bellied woodpecker visits a backyard bird feeder. Fall is a good time to make sure feeders are in good shape for the busy winter season.

The end of September and start of October brought a rush of migrants. Some of them stopped briefly for a visit. Some foraged for food in the yard and gardens or stopped for a quick bath or drink by the edges of the pond of in the shallows of the creek.

On the first day of October, several warblers and other songbird migrants provided some excitement. A male black-throated blue warbler absolutely stunned with some closeups. I’d waited all fall for this particular warbler to make an appearance and, in all honesty, I’d almost written off the chance that I might see one before the close of fall migration.

I heard the bird’s soft “smack” note before I located it in a rhododendron thicket. This call note is easily confused with that of a dark-eyed junco, but it’s just a little too early for the “snowbirds” to be arriving. The leaves in the rhododendron offered a mix of yellowed older leaves and greener new foliage, which provided a crisp backdrop as the energetic black-throated blue warbler flitted from branch to branch. 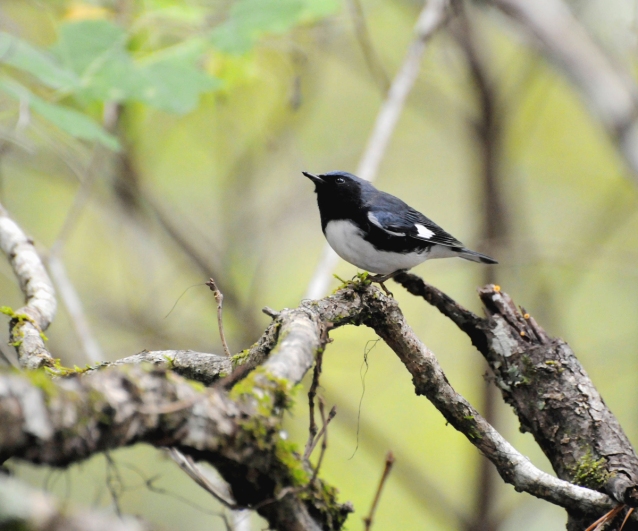 Photo by U.S. Fish & Wildlife Service/Mark Musselman • Black-throated blue warblers are among the many migrants passing through the region each fall.

While only a single black-throated blue warbler appeared, Tennessee warblers popped up almost everywhere, including one that investigated some potted plants and shrubs on my mom’s front porch. I watched a Tennessee warbler explore an ornamental lime tree’s leaves before it flew to an althea shrub planted in front of my mom’s living room window. There I watched it pluck some tiny caterpillars from the leaves for a quick snack. The warbler then flew to a stand of pokeweed and used its long bill to deftly extract some purple berries. I saw more Tennessee warblers in the plantings bordering my own porch later in the evening.

Other migrants that I’ve enjoyed seeing in the final days of September and first days of October have included hooded warbler, common yellowthroat, wood thrush, gray catbird, brown thrasher and Eastern wood-pewee. In addition, the ruby-throated hummingbirds are returning to my sugar water feeders as blooms become more scarce. Of course, the hummingbirds and the others will soon be gone, not to return again until next spring.

Photo by Jean Potter • A male hooded warbler flits through the foliage of a rhododendron thicket.

In the meantime, the winter season’s looming just around the corner. Seeing all the activity in my yard during fall migration made me want to ensure that it remains attractive for those birds that choose to eke out a living during the colder months of the year in our region.

Here are a few suggestions of things to do this fall to make your winter bird feeding more productive.

• Plant native trees that bear fruit. Autumn’s a recommended planting time for many trees, so consider checking with a local nursery about the selection of such native trees as American holly, serviceberry and red mulberry. It’s always good to select trees that provide fruit at different seasons to maximize the appeal of your plantings to birds.

• Build or refurbish a brush pile. Fall’s a season for pruning, so take those discarded limbs and twigs to construct a protective shelter for songbirds. Shy birds that naturally avoid open spaces can be coaxed closer to feeders by having access to a tangle of sticks and brush. A brush pile offers a degree of protection should songbirds at your feeder need to find a quick hiding place when a hawk or other predator makes an unexpected appearance.

• Evaluate feeders. The winter season brings snow, ice and a flurry of renewed interest in bird feeders, so now is the time to clean and replace feeders. The elements are not always kind on feeders, so when it becomes apparent that a feeder is in poor condition, consider replacing it with a new one. It’s also important to give feeders a thorough cleaning. Using a mild bleach solution will help disinfect them and make feeding from them safe for our feathered friends.

• Invest in a good bird identification guide or app. I am a fan of a good field guide that I can hold in my hands while thumbing through the pages, but I know that many people prefer the convenience of an app that’s accessible through their smartphone. Some popular apps would include the Audubon Bird Guide, eBird and Merlin Bird ID. Some of my recommended field guides include Peterson Field Guide to Birds of North America and The Sibley Field Guide to Birds of Eastern North America. Identifying birds congregated in the winter at a feeder is often easier than trying to track them through the green canopy during the other seasons. Of course, you’ll want to be aware that some birds wear different plumages during the winter months. The guides and apps can help with these identification challenges.