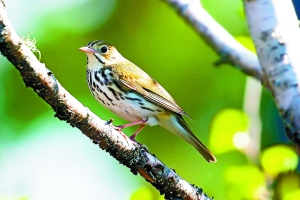 Photo by Hans Toom/Pixabay • An ovenbird, a member of the warbler family, perches on a branch. The bird gets its name from the shape of its nest, which resembles an old-fashioned Dutch oven. When male ovenbirds arrive on a potential nesting territory in the spring, they begin singing their loud, ringing “Teacher! Teacher! Teacher!” call almost tirelessly.

Autumn arrived Sunday, Aug. 14, heralded by a barely audible chip note that shattered the almost eerie silence that had accompanied my late morning woodland stroll up to that point. That timid chip note opened the floodgates, and I soon had a mixed flock of songbirds shadowing me, the scolding chorus increasing in volume as they demanded an explanation for my intrusion.

Of course, it’s not yet fall according to the calendar. The season won’t officially arrive until Thursday, Sept. 22. But there’s a day that comes every year that provides a tiny spark that kicks off my annual pastime of looking for migrating birds during my favorite season of the year.

The bird that unleashed the torrent of angry birds turned out to be an ovenbird, a species of warbler that nests in local woodlands every summer. In rapid succession, I also glimpsed a female black-throated blue warbler and a female hooded warbler. I also found it interesting that these warblers, particularly the hooded warbler, were also bus maneuvering to get a better look at me. I suppose it pays to be aware of one’s surroundings.

The in-your-face members of the mixed flock I encountered included a strident group of tufted titmice and some equally cantankerous Carolina chickadees. A couple of red-eyed vireos also took part in the songbird cacophony as these various birds joined forces to demand to know what I was doing in “their” woods.

Each warbler produces its own variation of the chip note, which is a vocalization that these nervous and energetic birds make as they flit from branch to branch through the woods. Learning to listen for the “chip” notes of the warblers that often join these mixed flocks is a great way to increase your warbler-watching opportunities. By “weeding” out the chickadees and titmice, it became easier to pinpoint the location of birds like the vireos and warblers.

Chip notes function for different purposes, but are usually produced when an individual warbler is alarmed by something, such as a human walking past their location. In some species, chip notes also provide a “contact call” to keep birds in touch with each other and aware of teach other’s location.

Many warbler species chip frequently while migrating, but there are also a few species such as Northern parula and black-and-white warbler that don’t usually produce these helpful chip notes. Unlike songs, which are almost exclusively produced by male warblers, both sexes produce chip notes.

I didn’t have binoculars with me when I encountered the flock, but I managed to put together enough behaviorisms and visual cues to identify the three species of warblers.

Ovenbirds differ from other songbirds in that they do not hop along a branch or over the woodland floor. Ovenbirds walk. They take slow, deliberate steps, which is exactly how the bird I saw moved, sidling along a branch gently sloping toward the ground.

Female black-throated blue warblers are drab, especially in comparison to the breathtaking males of the species. They do have a little white square on each wing that is a good way to quickly identify them. At close range, I easily detected the square even without benefit of binoculars. I’m getting older, and my vision’s declined somewhat, but I’m pleased to still manage even tricky warbler identifications.

The female hooded warbler was easy. As she flew from branch to branch, she constantly fanned her tail, flashing the white outer tail feathers in a trademark manner for the species. Female hooded warblers don’t shine with the same radiance as the males, and they also lack the namesake black hood. A good look, however, is usually sufficient for identifying them.

Most people have probably heard of a “murder” of crows as a way to describe a flock of these particular birds. Warblers also have their collective names. According to the Birdorable Blog, a flock of warblers is often referred to as a bouquet, a confusion, a fall, a cord or a wrench of warblers.

This fact was new to me. I personally like “wrench of warblers.” It has alliteration and it describes how these amazing little songbirds can definitely “wrench” one’s attention from other matters.

I’ll be getting distracted a lot this fall as I seek not only warblers, but other migrants such as nighthawks and flycatchers, thrushes and tanagers, grosbeaks and sparrows, as well as raptors and shorebirds. August, September and October are busy months for some of our feathered friends. Keep alert and see if you can encounter your own “wrenches” of warblers this autumn.