Photo by Bryan Stevens
A pair of White-winged Scoters, back, swim on the Watauga River in Elizabethton with three Greater Scaups.

Last month’s Great Backyard Bird Count certainly merited description as a global affair. Checklists came in from more than 103 countries, including Australia, China, Argentina, Kazakhstan, Iceland, India, Kenya, as well as Canada, the United States and Mexico. Birders fanned out at hot spots around the world to count birds from Friday, Feb. 14 to Monday, Feb. 17.

Participants in the 2013 GBBC tallied more than 40 percent of the world’s bird species, with organizers setting a goal to take that figure to 50 percent this year.

A total of 644 species were found within the United States during the 2014 GBBC. California, Texas and Florida led the count with 364, 349 and 305 species found within those states, respectively.

In Tennessee, a total of 139 species were found during the GBBC. That’s a far cry from the 201 species located by sharp-eyed birders in Georgia, 200 species found in North Carolina, 184 species identified in both Alabama and Mississippi, as well as the 180 species counted in Virginia.

Arkansas eked past Tennessee with 141 species found, but Tennesseans did better than Missouri, where GBBC participants tallied 133 species, and Kentucky, where counters found 128 species.

A total of 2,357 checklists were completed by Tennessee GBBC participants, which provided some extensive coverage across the Volunteer State.

With 100 species, Hamilton County proved the most productive Tennessee county, followed closely by Shelby and Knox, with 98 and 97 species, respectively.

Closer to home, results were less dramatic but still important.

I mostly counted at home during this year’s GBBC, but I did make trips to the pond at Erwin Fishery Park and Roan Mountain State Park to expand my birding territory.

As checklists poured in from GBBC participants, a few trends became clear from the early stages of this year’s count. For instance, this year lacked any evidence of a “superflight” of irruptive finches.  Last year the GBBC documented such a phenomenon, which was driven by food shortages in Canada. Ten species of irruptive birds (mostly finches) staged a record invasion in areas where they don’t usually show up.

On the other hand, the 2014 GBBC has confirmed that this has been a great year for spotting Snowy Owls across the United States.

A massive irruption of Snowy Owls into the northeastern, mid-Atlantic and Great Lakes states had already been producing headlines for the past several months.

Halfway through the GBBC, with 327 checklists reporting a total of 476 Snowy Owls in 20 states and provinces of the United States and Canada, it was clear that many of the Snowy Owls had found their winter homes to their liking. Last year, 392 owls from eight provinces and 14 states were all that were counted during all four days of the 2013 GBBC.

As an illustration of how the owls have moved, in 2013 Canada had 46 percent of the Snowy Owl reports, but this year that number has dropped to 32 percent. Despite this year’s impressive numbers, these large, white owls can still be hard to find. Many GBBC participants succeeded by checking seashores and lakeshores, farm fields and even cities, where the owls often choose a prominent perch with a good view, such as a utility pole or even the roof of a city building.

In much of North America, people (and birds) have been shivering through bone-chilling blasts of arctic air also called the “polar vortex” phenomenon. The impact of this extended cold on birds has beens most apparent in areas such as the Great Lakes, which are almost completely frozen. Only Lake Ontario has any significant open water now and that has resulted in major movements of waterfowl such as ducks, geese and grebes. The GBBC is capturing these patterns well.

For example, the White-winged Scoter is not usually found inland in February, but has been widely reported from interior locations over the past few days as has the Long-tailed Duck. Both these species showed up in unusual numbers in Northeast Tennessee during late January and throughout February. 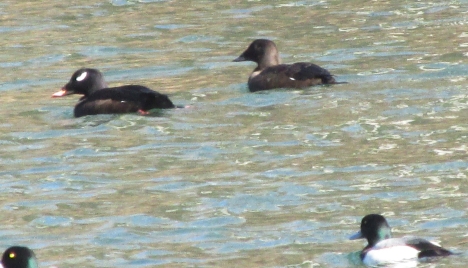 Photo by Bryan Stevens
These two White-winged Scoters spent several days in late January and early February on the Watauga River near Meredith Cabins in Elizabethton.

A pair of White-winged Scoters spent several days on the Watauga River near Meredith Cabins in late January and early February. My mom and I managed to get good looks at the two ducks on Feb. 1. By climbing down a tangled bank, I also managed to get some decent photographs of them.

White-winged Scoters are large, solidly built ducks. Males can weigh three-and-a-half pounds while females can reach a weight of two-and-a-half pounds. Both sexes have the vivid white wing patch that gives the duck its common name.

This duck nests on freshwater lakes and wetlands in the northwestern interior of the United States and Canada.

A total of 62 White-winged Scoters were found in Tennessee during this year’s GBBC. Three Surf Scoters were also found.

The scoters are classified with the diving ducks. To learn more about scoters and other diving ducks, here’s a helpful link to a PDF with detailed information about various species, including White-winged Scoter.

According to an update regarding the GBBC posted at birdcount.org, one of the more exciting rare birds reported in this year’s GBBC was spotted across the pond. A Yellow-rumped Warbler has been visiting a feeder in, of all places, central England! This is the first New World warbler ever recorded for the GBBC from the Eastern Hemisphere. 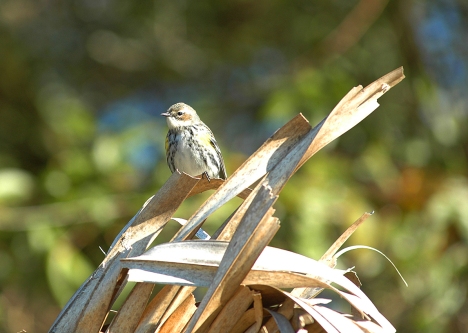 Photo by Bryan Stevens
This Yellow-rumped Warbler was photographed on Fripp Island, S.C., several years ago.

In northeast Tennessee, the Yellow-rumped Warbler, many years ago known as Myrtle’s Warbler, is a common winter bird. Indeed, it is the only warbler that typically attempts to spend the winter months in the eastern United States.

I would love to hear from readers. Just post comments on my new blog at ourfinefeatheredfriends.wordpress.com. You can also reach me on Facebook or send email to ahoodedwarbler@aol.com. Please share the link to the blog with others who might be interested in the topic of birds and birding in Northeast Tennessee.