The following post represents my second compilation of Facebook posts about my annual lawn chair birding experiences. My mom and I have made lawn chair birding an annual tradition every fall. It’s a great way to enjoy the warblers and other migrants that stream through the yard in September and October. For the most part, you can even avoid the neck sprain that comes with long period of scanning the treetops for glimpses of energetic and evasive warblers.

A young American Goldfinch perches on a twig.

Sept. 9
Some clouds and drizzle made for a very productive evening of lawn chair birding, bring a bonanza of warblers and other migrants. I added four new birds, all warblers, to my 2015 yard list. Bird No. 73 for the year was a Golden-winged Warbler. This makes two consecutive falls I have seen this warbler at home. Bird No. 74 turned out to be a dazzling male Prairie Warbler, as opposed to the more drab female Black-throated Blue Warbler that became Bird No. 75 for the year.

A Pine Warbler also made the list as Bird No. 76. Other warblers included Tennessee, Magnolia, Chestnut-sided, Cape May, Hooded, Black-and-white and Black-throated Green. The rest of the migrant parade consisted of Eastern Phoebe, Eastern Wood-pewee, Ruby-throated Hummingbird, Eastern Towhee, as well as the usual residents such as House Finch, American Goldfinch, White-breasted Nuthatch, Downy Woodpecker, Carolina Chickadee, Northern Cardinal and lots of Tufted Titmice. Most of the warblers refused to stay in place long enough for photos, but at one point the Pine Warbler actually landed on the roof of the house and allowed a few photos which provided nice documentation for a fun evening that ended when the rain began to come down harder. 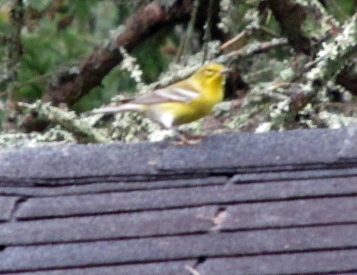 A Pine Warbler takes a break on the roof of the house.

Sept. 10
No new birds this evening during lawn chair birding with mom. That doesn’t mean we didn’t have some fun observations, including a baby Song Sparrow screaming his head off for a morsel from mom or dad. We also saw Indigo Buntings, Eastern Phoebe, Eastern Towhee, Scarlet Tanager, Ruby-throated Hummingbirds, as well as several warblers,including male Hooded, female American Redstart, young Chestnut-sided and a female Magnolia.

Sept. 13
Warblers on Saturday evening included Black-throated Green, Tennessee and Magnolia, as well as an American Redstart. We also had a Broad-winged Hawk hanging around the fish pond. We startled him several times on Saturday. My mom and I extended birding to a visit to Limestone Cove and the Bell Cemetery, where we spotted a Red-tailed Hawk being mobbed by around 50 American Crows. No new yard birds, though.

A noisy Carolina Wren scolds from a Blue Spruce.

Sept. 16
Had a good day of migrants in the yard, including a lot of male warblers — Black-throated Green, Hooded, American Redstart — and some other migrants. Some young or female warblers included Cape May, Chestnut-sided, Tennessee and Magnolia. There was also a family of noisy young American Goldfinches hanging around. No new species this evening, but I managed this photo of a Carolina Wren to stay in practice. 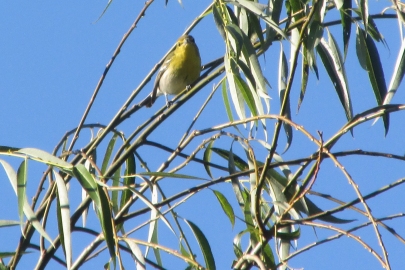 A Yellow-throated Vireo makes a migration stop along Simerly Creek.

Ruby-throated Hummingbirds continue to compete for their claims to the sugar water feeders.

A Northern Waterthrush in the branches of a hawthorn tree along Simerly Creek.

Sept. 21
An overcast day brought plenty of migrants for the show during multiple sessions of lawn chair birding with my mom. The new species for the yard in 2015 included a Northern Waterthrush, pictured, and Bay-breasted Warblers. The waterthrush becomes Bird No. 79 and the Bay-breasted Warblers represent Bird No. 80, helping me move into another stretch in my Big Yard Year. We also saw Brown Thrasher, Gray Catbirds, Magnolia Warbler, Hooded Warbler, Chestnut-sided Warbler, Cape May Warbler, Tennessee Warbler, American Redstart and Pine Warbler, as well as Yellow-throated Vireo and Red-eyed Vireo. Ruby-throated Hummingbirds are also active at the feeders. The usual birds are visiting the feeders for sunflower seeds.

Sept. 22
Before leaving for work this morning, I heard a duet by Great Horned Owls from the surrounding woodlands. It was an extremely foggy morning, which might have made a difference since the owls were calling about an hour after sunrise.

A Scarlet Tanager without the red feathers that provide the birds its common name.

An Eastern Phoebe perches on top of a weed stalk.

A katydid perched atop a zinnia bloom.