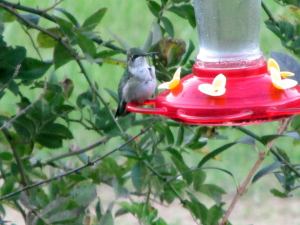 My last ruby-throated hummingbird in 2015 visited my sugar water feeder close to dusk on Oct. 10. I never saw any hummingbirds after that date.

What do the hummingbirds that make their homes in our yards from April to October do during the five months they are absent from the region?

Most ruby-throated hummingbirds retreat to southern Mexico and Central America, some winging their way as far south as extreme western Panama, as well as the West Indies and southern Florida. They utilize a variety of habitats, ranging from citrus groves and forest edges to tropical deciduous forests and the edges of rivers and wetlands.

In this region, we can only expect with any confidence to enjoy a single species — the aforementioned ruby-throated hummingbird — for half the year. It’s always great to welcome them home. Here are some of the other hummingbird enthusiasts who shared their “first arrivals” with me.

“I was having my morning coffee … looking out at the frost we got in Marion last night,” she wrote. Then, from inside her home, she happened to notice something. Giving her sugar water feeder a closer look, she was surprised to see a hummingbird perched on it.

Beverly Puerckhauer sent me an email on April 5. She informed me that she has house finches visiting at her home, but she hasn’t yet seen a hummingbird.

“I just saw a hummingbird at my house and my feeder was inside,” she informed me by email. “The feeder is out now, but he had already left. I sure hope he comes back.”

Glen Eller, a resident of Kingsport, Tennessee, saw his first ruby-throated hummingbird of the season on Sunday, April 10, at 6:35 p.m. He shared his observation through a post to the list-serve bristol-birds.

Pat Stakely Cook notified me of a first hummingbird sighting by Facebook post. “We had our first one here in Marion, North Carolina, on Sunday, April 10,” Pat reported, adding that there had been lots of activity around the feeders once that first hummer showed up.

Philip Laws, a resident of the Limestone Cove community in Unicoi County, Tennessee, reported his first hummingbird on Monday, April 11.

“I just saw my first hummingbird in Limestone Cove, a male of course, about noon,” he reported in a Facebook message. He added that he hadn’t had time to check his feeder on the previous day, but that the sugar water level was down enough to suggest that the hummingbird had probably been feeding on Sunday, too.

Susie Condrey of Marion, North Carolina, welcomed back a hummingbird on April 11 at 4:15 p.m.

“I was sitting on my front porch about 7 on Monday evening when a hummingbird went flying by,” she wrote in an email. “I have my feeders in front of three different windows, so when I went inside, I saw the ruby-throated hummingbird feeding at each of my feeders.”

Janice added that she loves watching the hummingbirds feed. “They are such amazing creatures of God,” she wrote.

“I just saw my first hummingbird this spring,” she wrote in her email. She noticed the bird flying around the hummingbird feeder at 7:35 p.m.

Lorraine Hale posted on bristol-birds that she saw two hummingbirds on Monday, April 11, at her home in Bluff City, Tennessee.

“I wanted to let you know we saw our first hummingbird on April 12 at 12:25 p.m.,” she wrote. She added that she has only one feeder out, which still managed to attract this hummingbird.

Joan Moffitt posted on my Facebook page that she saw her first hummingbird of spring on Tuesday, April 12, around 2:45 p.m. She put out her feeder on Saturday, April 9.

Harold and Elizabeth Willis saw their first hummingbird at 8 a.m. on Wednesday, April 13. The couple resides in Marion, North Carolina, in the Hankins community near Lake James. 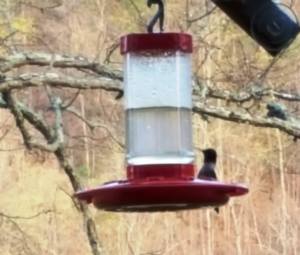 Linda Kessinger Rhodes sent me a Facebook message reporting her first hummingbird of spring on Thursday, April 14. “There he was — the first hummer I’ve seen at my waiting feeder off Volunteer Parkway in Bristol near the racetrack,” she wrote.

“Our hummingbird arrived  April 14 at 8:10 p.m. just before it got dark,” they shared in an email. “it was so exciting to see the hummer sitting and relaxing on our nectar feeder.”

“We hope this one stays around as last year it was ten days before we saw another hummer,” they added.

Bill and Judy Beckman, who reside on Spivey Mountain in Unicoi County, Tennessee, saw their first hummingbird — a male — around 2 p.m. on Thursday, April 14.

Steve Meigs saw his first hummingbird of the spring at 11:30 a.m. on April 14 at his home in Foxhound Hills in the Limestone Cove community of Unicoi. “That’s a few days earlier than the last few years,” Steve noted, adding that his home is located at an elevation of 2,800 feet.

Phyllis Moore informed me via Facebook that her hummingbirds are back in Bristol, Virginia, as of 7:30 p.m. on April 20. 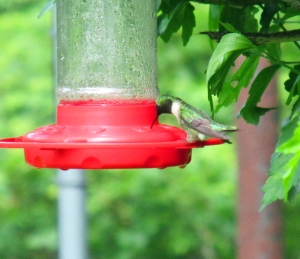 James Noel Smith of Unicoi informed my via Facebook that the hummingbirds are back at his Unicoi, Tennessee, home as of April 26.