Photo by Bill Buchanan/U.S. Fish & Wildlife Service • Hummingbirds visit flowers for nectar, but they will also visit feeders filled with sugar water. The recommended ratio for the sugar water mixture is four parts water to one part sugar. Because of possible health hazards to these tiny birds, do not add red dyes or other artificial coloring to the mixture.

Readers are still sharing hummingbird arrival stories, and a few of those stories boasted some extra drama. For instance, one of these tiny birds arrived with such gusto that it soon ran afoul of a screen door. No need to worry, though. The story has a happy ending, as do all of these tales of fascination with the most tiny feathered visitor to our yards and gardens.
Read on and enjoy a tale about the love of nature and hummingbirds shared by a daughter and her 88-year-old mother. Another story highlights the hummer that provided a welcome home greeting for a couple returning home after a recent trip.
Perhaps Janet James said it best when telling how she felt after seeing her first hummingbird this spring. “Happy! Happy!” Janet wrote in an email.
I think that’s the secret of the appeal of these tiny birds. They spread happiness as they zip through our lives on their swiftly beating wings. As one reader discovered, just a quick glimpse of a hummingbird can chase away the gloom of a rainy day.

Don Holt and Dianne Draper saw their first hummingbird of spring at Dianne’s home on Cherokee Road in Jonesborough, Tennessee, on Tuesday, April 11.

Susan Gossett sent me details about her parents and their hummingbird sighting in a Facebook message. “My parents, Harold and Elizabeth Willis, just read your article today in The McDowell News and they saw their first hummingbird April 12 around 5 p.m. They live at 80 Willis Drive in Marion, N.C.”
Guy Davies shared information about his father’s first spring hummingbird sighting. “My father Is Richard “Bud” Davies, Retired 1st Sgt., U.S. Army,” Guy wrote in his message. “He saw his first hummingbird April 14 at 7:10 p.m. at his home in Bluff City, Tennessee. They’re back!”
“I saw my first hummer of the season at my feeder on Saturday, April 15,” Daniel Callahan wrote in an email. Daniel, who lives on Mendota Road in Washington County, Virginia, said the observation involved two male hummingbirds.
Steven Hopp saw his first hummingbird — a male — on Saturday, April 15.
“We have a feeder on our patio and even though the feeder was empty, it zipped in and went right to it,” Steven wrote in his email. “I think that suggests it was a returning male. I also heard a scarlet tanager and indigo bunting on Saturday, April 15.”
Graham Gardner sent me an email to let me know of his Easter Sunday hummingbird sighting. “While sitting on my back porch in Abingdon mid-morning on April 16, I saw, for the first time this season, a male ruby-throated hummingbird visit our feeder three times before buzzing off,” Graham wrote in the email.

Toni Shaffer, who lives off Gate City Highway in Washington County, Virginia, sent me an email to let me know she saw her first hummer at 7:30 a.m. on the morning of Monday, April 17.  “He has remained near the feeder all day,” she added. “The hummingbirds are about four days later than usual here.”
Deborah Clark sent me an email about hummingbird arrivals.
“My mother, Louise Hiler Tilson, has asked that I email you to let you know that she and I both have seen hummingbirds at our homes,” Deborah wrote in the email. “Mom lives in the community of Riverside, between Marion and Chilhowie along the banks of the South Fork of the Holston in Smyth County.” She said her mom saw her first ruby-throated hummingbird on the morning of April 17.
Deborah said her mother has been an avid birder for most of her 88 years. “Mother will put up several feeders (to join the seed feeders that already enliven her backyard) soon, and expects to have her usual hoard of tiny warriors buzzing around her door,” she added.
Deborah lives in Grayson County, near the little village of Troutdale, Virginia. Her own first-of-the-season hummer — a male with the ruby throat — hovered just outside her kitchen window, apparently looking at her as she was washing dishes. “Although he might have been seeing his own reflection in the window glass,” Deborah added.

Mary Jane McClellan sent me an email to let me know she put her sugar water feeders out at 4:30 p.m. on Monday, April 17 — two days later than she normally does. Mary Jane, who lives near South Holston Dam on Rooty Branch Road in Bristol, Tennessee, saw her first hummingbird less than two hours later when a hummer showed up at 6:11 p.m.

Some hummingbirds have a flair for making a dramatic entrance.
Linda Kessinger Rhodes, a resident of Bristol, Tennessee, said in a Facebook post to my page that she had been anxious for the hummers to appear at her home about two miles north of Bristol Motor Speedway. “Today (April17) was the day,” she wrote in her post.
“However, at first, it wasn’t the joyous moment I had envisioned,” she added.
The tiny male hummingbird flew right into the screen door and his bill got stuck.
“My husband pushed it back and freed the poor little thing,” Linda said. She joked that the tiny bird may never come back to these parts again after that adventure!

Janet James, a resident of Bluff City, Tennessee, put out her feeder a week before she got any visitors. “I saw my first hummer on Monday, April 17,” she said in an email. “Happy! Happy!” 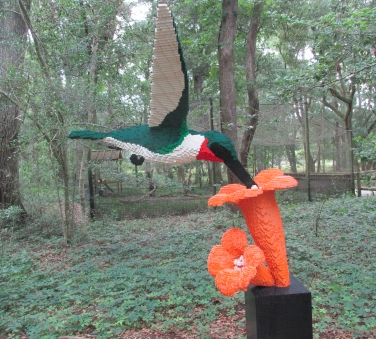 Don and Donna Morrell shared the news of their first hummingbird of spring in an email.
“We saw our first hummer at 6 p.m. on Sunday, April 16,” Don wrote. “We live behind South Holston Dam and had just gotten back from vacation.”
He added that Donna had put out the feeder a week earlier before they left on their trip.
“We were eating supper and it came and had supper with us,” he added.

Cecilia Murrell emailed me about her hummer sighting. She said that her first spring sighting of a hummingbird — a male — brightened a gloomy, rainy day at her home in Abingdon, Virginia, on Tuesday, April 18.

When he emailed me on Tuesday, April 18, Randy Smith, who lives in Abington, Virginia, said he still hadn’t seen any hummingbirds. However, he has seen several warblers. “I saw Black-and-white warblers, Northern parulas, hooded warblers, yellow-rumped warblers and a Louisiana waterthrush on Saturday, April 15, at Hungry Mother State Park in Marion, Virginia.
Randy, who volunteers at the Abingdon Public Library, said Karen Northrup, one of the library’s employees, was at home with her husband when they saw their first hummingbirds of the season on Saturday, April 15.

Lois Cox and Wilma Boy on Riverside Road in Bluff City, Tennessee, saw their first hummingbird on Tuesday, April 18. They also reported in the same email that their first spring sighting of an indigo bunting — a male eating millet seed from a feeder — took place the same day.

David and Judy Brown live in Damascus, Virginia. They saw their first spring hummingbird back on April 18 at 11 a.m. at their home they informed me in a Facebook message.
“Just thought I’d let you know I sighted our first hummingbird on April 18 feeding on our deck feeder sometime before noon,” wrote Linda K. Sproles in an email. “I also have noted on our calendar that the first hummingbird was sighted on April 22 in 2016 and April 19 in 2015.
Linda resides on Hunter Hills Circle in Bristol, Tennessee.
Wayne Miller, a resident of Abingdon, Virginia, emailed me about his first hummer sighting. “Our first hummingbird of the season arrived to check out our feeder on the deck about 7:30 p.m. on Wednesday, April 19,” he wrote.

Dee Sims also contacted me by Facebook. “I saw my first hummingbird April 20,” she wrote. “live in Belfast, Virginia, which is between Lebanon and Richlands.”

“I had my first hummingbird this morning,” wrote Dianne Bisig in an email sent to me on Sunday, April 23. “It looked like it was trying to find a spot out of the wind. It stayed on the porch for a while.”
Dianne resides in Millbrooke Estates in Abingdon, Virginia.
Marty Huber and Jo Ann Detta of Abingdon, Va., emailed me to let me know they heard their first hummingbird on April 21, but they didn’t actually see one of these tiny birds until April 23.
“It’s 7:40 on Sunday night (April 24) and I’ve just seen our first hummer, sitting on a feeder in the rain,” wrote Bettie Hite, who lives on Overbrook Road in Bristol, Tennessee, wrote in an email.

Wilma Sexton messaged me on Facebook in regards to my article in the McDowell newspaper on about sightings on hummingbirds. “I had just finished your article and I had already put out a fresh hummingbird feeder the weekend before,” she said. “My husband and I really enjoy watching and waiting for them to return. We saw our first one April 26.”

Wilma and her husband live in Union Mills, N.C.