They’re not as dependable as ruby-throated hummingbirds, but they are every bit as impressive. Of course, I am referring to rose-breasted grosbeaks, which have been delighted people across the eastern half of the United States for the past couple of weeks.

Among these grosbeaks, it’s the male that wears the exquisite apparel. Males have a black head, wings, back and tail, with a bright splash of rose coloring across the front of their breast. Males and females exhibit marked sexual dimorphism, which is simply a scientific way of saying that males and females are quite different in their appearance.

The female rose-breasted grosbeak lacks the male’s showy plumage. She could easily be mistaken for a large, chunky sparrow with her brown, streaked feathers. She does have the large beak in common with the male. In fact, the term “grosbeak” is derived from German and simply means “big beak.” Incidentally, I’m told by bird banders that rose-breasted grosbeaks can give a nasty nip with that sizable and sturdy beak.

My email in-box and my Facebook page have been active this migration season with reports from people eager to share observations of these showy songbirds.

Carla Honaker sent me an email on Monday, April 27, about visiting rose-breasted grosbeaks.

“Two days ago I ran out of bird seed and changed from a mix to a black oil seed,” Carla reported. “I had heavy bird traffic yesterday and this morning my mother went over to open the blind that faces the front yard where the bird feeder hangs on a limb in a dogwood tree. To her surprise, there was a rose-breasted grosbeak sitting on the feeder eating the sunflower seeds.”

Understandably, Carla and her mother were very excited to see this unknown visitor at the feeder. Curious about the bird’s identity, Carla used the app Cornell Lab Merlin and made the identification. 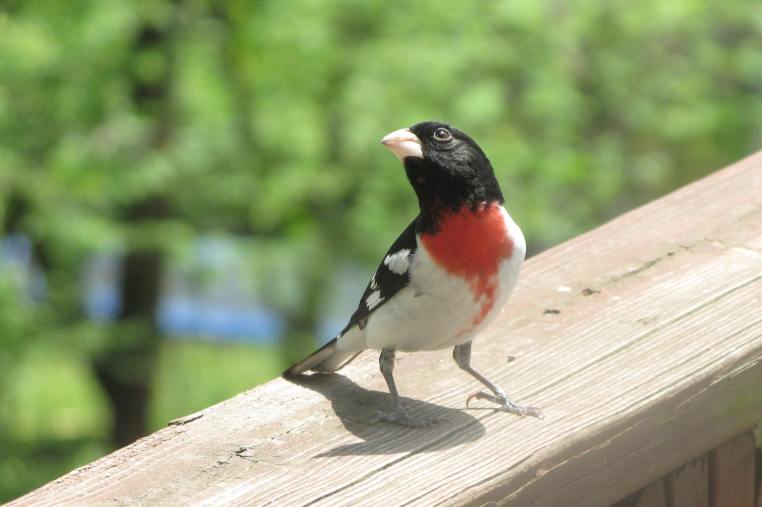 Photo by Paintspreader/Pixabay.com • Male rose-breasted grosbeaks provide a jolt of excitement during migratory stopovers in yards and gardens throughout the eastern United States every spring.

Carla said the grosbeak stayed around for a few more minutes, long enough for her to take a picture of the side of his wing and back and tail.

She also had a question, asking if there are many rose-breasted grosbeaks in this area and whether there is a chance he will be a regular at her feeder.

Photo by Bryan Stevens • A male rose-breasted grosbeak perches in a tree on Roan Mountain in Tennessee.

Alas, rose-breasted grosbeaks are usually only spring and fall migrants unless one lives in the higher elevations of some of our local mountains. Visit area mountains in summer if you want to see these birds away from your feeders. They’re still fairly common in the region, but sadly, their numbers have declined overall.

I also let Carla know that grosbeaks are very fond of sunflower seed, so changing the mixed seed to black oil sunflower was probably helpful in attracting the visitor.

Elizabeth “Liz” Wynacht, who lives outside Atlanta in the town of Roswell, Georgia, also shared her own rose-breasted grosbeak story in an email she sent to me on Wednesday, April 29.

Elizabeth provided some interesting background to preface her story. “A few years ago, I looked up and saw this bright red “kiss” on this creamy colored breast of a bird,” she wrote. “I ran in to get my camera but he was gone when I got back. After researching what I thought I saw, my guess was a grosbeak. I have been looking for him ever since.”

Photo Provided by Byron Tucker • A male rose-breasted grosbeak squares off with a red-bellied woodpecker in the suburbs of Atlanta, Georgia.

After a couple of years, her wait ended. “This past Friday, while sitting on my porch, I looked up from my phone, and I saw that beautiful red kiss coming toward the feeder,” she wrote. “Of course, my movement startled him and he flew away.”

Once again, she fetched her camera and waited. Liz reported that the male grosbeak showed up again along with his little wife. They visited for three days.

“He was a wonderful surprise in the midst of this crazy pandemic,” Liz wrote. “Really lifts the spirit to see such a beautiful bird.”

Shannon Stimson sent me an email on Monday, May 4, with some attached photos of male rose-breasted grosbeaks. “I had three males at my feeders two days ago followed by one female,” Shannon wrote. “One male that looked less mature stayed on for two days gorging on nuts and seeds for hours and engaging in a slight disagreement with a red-headed woodpecker over possession of the feeder.”

Sadly, Shannon reported that the grosbeaks moved on, but noted that their visit brought a great deal of cheer in this isolating time.

Photo by Bryan Stevens
A rose-breasted grosbeak finds a meal of sunflower seeds at a feeder.

Kaylynn Wilster, who lives in Jonesborough, Tennessee, emailed me on Thursday, April 30, about her own rose-breasted grosbeak sighting. “He was not afraid of me and let me walk around the yard,” she wrote.

The very same day that Kaylynn saw her grosbeak, I looked out my window and saw one at my feeders. There had been a storm the previous night, so I suspect that helped “persuade” the bird to visit.

I posted on Facebook about my sighting and several friends shared their own.

“I was just reading an old article of yours about rose-breasted grosbeaks and, lo and behold, I have a flock of them hanging out on my feeders for the first time ever,” wrote Mary Ragland in a Facebook message to me.

Amy Wallin Tipton, who lives in Unicoi County, Tennessee, reported that her parents had been hosting a male and female rose-breasted grosbeak for the past two days.

Keep the reports coming. If nothing else, sharing bird sightings is a way to feel less socially distant from others. 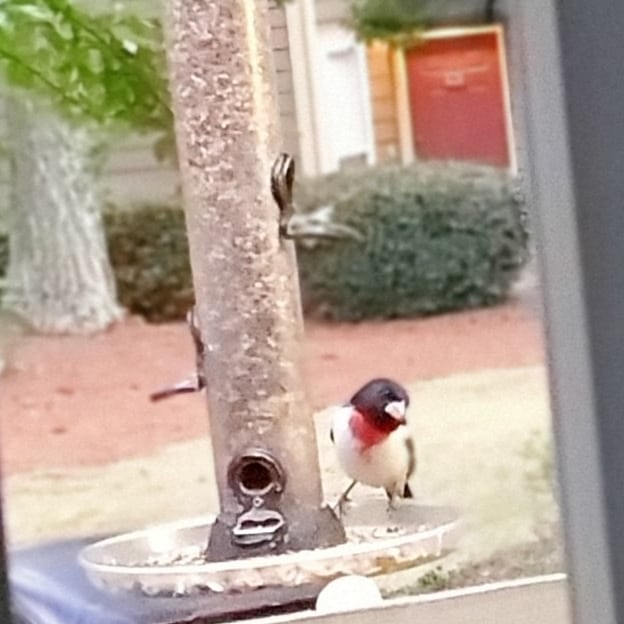 Photo Provided by Elizabeth “Liz” Wynacht  • A male rose-breasted grosbeak visits a feeder in a suburban area near Atlanta, Georgia.